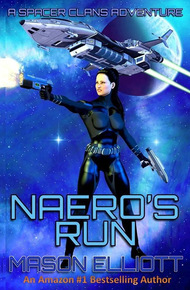 Mason Elliott grew up loving Science Fiction and Fantasy in all of their myriad forms. That love has transferred into his dedicated writing. Like many writers, he lives a spartan lifestyle, and yearns to devote his life even more to his writing. So be a fan, buy his stuff, and enjoy!

2595: Ten years after The Fourth Spacer War with the rival Gigacorps.

Naero Amashin Maeris works in her Clan's merchant fleet, dreaming of her own ship and developing psyonic powers without going nuts. After tragedy strikes her Clan in the Unknown Regions, agents from the Corps stalk her, believing she holds the key to secrets priceless and deadly: lost tek data from an ancient, godlike alien race.   Soon she's caught up in a white hot intrigue of raiders, assassins, and warring interstellar spies and navies.

Ellis's flip nature bothered Naero almost more than her former uncle's treachery–if in truth, he'd ever been her uncle.

Baeven might tell her anything to keep her off guard.

Even if he had been family once, as an outcast, he was dead to her and her clan now. Nothing would stop her from killing him if she got the chance.

Instead of Naero being ordered out, the security panel to the brig slid open without warning.

Baeven strode in among them.

Baeven stunned Ellis with the back of his hand, knocking him ten meters across the room, leaving a red smear against the wall.

He endured a glancing blow from Gallan. He merely winded Tarim and let him drop.

Naero maneuvered for an opening.

Gallan gave it to her.

Baeven countered Gallan's combinations and flipped him into the high ceiling corner. The big Spacer fell hard and did not move.

Naero attacked low off the floor, and then from the adjacent wall behind Baeven.

He deftly deflected most of it with one hand, but still gagged and choked.

Naero followed up with combo kicks to several vital areas, like kicking someone made out of steel.

She hit Baeven with several microbomblets she and Gallan had kept concealed on them.

The blasts rocked him and pushed him back across the length of the cell.

She got a good running start, ending with a powerspin kick that should break his neck.

With one hand, he slammed her against the wall to either side of him.

He dropped her to the floor, helpless and gasping, ribs moving in ways they shouldn't.

Baeven could have slain her and the others easily. At any time.

In a day or so, her smartblood might regenerate much of the damage. But he made sure her next several hours would be filled with wrenching pain every time she moved.

He grabbed her by the hair and yanked her to her feet. Naero gasped. She felt her eyes bulge as if they might burst.

She ground her teeth, but other than a few weak grunts, she did not cry out. She wouldn't give the bastard the satisfaction.

He stared into her eyes up close, his scorching breath on her face. "I warned you not to trifle with me. I thought you were smarter than this, Naero. But I guess not. I don't want to hurt you and your friends. But I will. If you force me to."

He glared at Naero again and shook her, knowing full well the intense pain it caused.

She felt her eyes roll up. She almost blacked out.

"Listen to me," Baeven said "The next one who interferes with me I cripple. Including you, Naero. You don't need to be able to walk to be of use to me.

"The next I kill. No hesitation. No mercy. Understand?"

She barely managed to nod.

"Good. Now, come with me and cooperate. Clean yourself up. More interested parties have arrived. They wish to examine you, along with the others, and renew the bidding."

"Why didn't you just leave me with the Triaxians?" she said.

"They don't have the information I desire, and they always double-cross you in any case. I couldn't trust to their heavy-handed methods to tell me anything. Besides that, I detest them the most of all the Corps."

"I hope this is all worth it, you renegade son of a bitch."

He half-smiled. "Such flattery. Some of our new guests claim to have certain ancient testing methods they would like to try out on you. We shall see."

"Just what do you want, Baeven? Wealth, power, control?"

"Information. Knowledge. Still so many things I want to know, and I'm running out of time. Thus far, all the players know something. All of them possess one or more pieces to this puzzle. Perhaps these new tests will tip the scales. That's why I've lured them all here to this secret location–to find out who knows what, and put it all together."

"You're playing all the Corps against each other?" Naero laughed, even though it nearly killed her. "You didn't strike me as the ambitious or greedy type, Baeven. I guess you're just a criminally insane fool."

He smiled a grim smile. "You could be right." He led her out of the brig and secured it behind him.

"I have always been quite mad, they say."