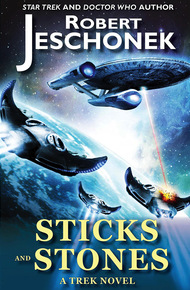 Sticks and Stones: A Trek Novel by Robert Jeschonek

First contact with the multilingual Vox species goes horribly wrong when the linguist of the star cruiser Exogenesis mistakenly uses a forbidden slur. Drawn into a violent revolution, a "war of words" to decide language dominance, the crew of the Exogenesis races against time to convince the aliens to unite against a greater threat: an unstoppable invasion fleet roaring toward planet Vox from deep space. When revolution and invasion collide, it is up to Captain Joshua Swift and the Exogenesis crew to save the world by revealing the secret behind the slur that started it all…the dark secret linking Vox and invaders in an ancient cycle of slavery, suffering, lies, and death.

Captain Joshua Swift asked Commander J'Tull to repeat what she had just said.

J'Tull complied, speaking in the same cool monotone that she had used the first time. "Each ship in the fleet is fifty times the size of the Exogenesis."

Standing before his command chair on the Exogenesis bridge, Swift shook his head in amazement. Even displayed on the viewer against a backdrop of stars, with no frame of reference to allow a true gauge of their size, the ships looked massive and imposing.

And there were a hundred of them.

"Weapons?" said Swift, unable to tear his gaze from the screen.

"That's a lot of firepower," said Swift. "Let's stay on their good side."

J'Tull looked up from the scope that extended from the console at her station. "Perhaps it would be best to avoid all their sides," she said. "We have no record of vessels of this design or of the species that built them. We have no knowledge of their intentions. What we do know is that they exceed our ship in numbers, size, and firepower."

"Which is why we should be cautious," said Swift. "But as you say, we have no record of these people. We can't ignore a first contact situation."

Swift sighed. He knew that his first officer was right, but he wasn't sure that he could pass up this opportunity. Attempting contact could be a dangerous choice, even a fatal one…or the first step in a new and rewarding relationship with an alien species.

So far, in spite of their heavy armaments, the alien ships had revealed no hostile intentions. After coming upon them on the way to survey a nebula, Exogenesis had followed them for over an hour without getting a reaction. With the comparatively tiny star cruiser trailing behind it, the fleet had just kept plowing forward at a speed of Grav 2, also known as G2 (as measured on Astrofleet's gravity drive scale) seemingly focused entirely on its own mysterious purpose.

Whatever that purpose might be, Swift doubted that it was benevolent. He could not ignore the destructive power displayed so conspicuously on what almost certainly were ships of war.

So yet again, the dice were in his hands. Play it safe, or gamble his ship and the lives of the 83 crewmen onboard.

He made up his mind, then gave himself an extra moment to change it.

He didn't change it.

Swift thought that he could feel J'Tull's disapproving gaze boring into his back, and he turned. Her eyes were fixed rigidly on a console, but he had the distinct impression that she'd just flicked them there an instant ago.

He turned back to the fleet of ships on the viewer. "Martin," he said calmly. "Do not power up weapons, but be ready for anything."

"Aye, Captain," said Simon. His voice was taut, his attention fully focused on his duty, as always.

"You, too, Tanner," Swift told his helmsman. "We may need to put those engines through their paces."

Ensign Tanner Bellweather played the controls on the helm console before him. "Aye, sir," he said.

Swift nodded, assured that his well-oiled machine of a bridge crew was ready for whatever would come next. He looked around at them, noting proudly how far they'd come since Exogenesis had first left Earth orbit.

It was funny how daily close calls could take the wet right out from behind your ears.

A minute ticked past, followed by another. The giant golden ships on the viewer continued their implacable progress, ignoring the buzzing pest in their wake.

"Mariko?" Swift spoke without diverting his eyes from the screen.

"Nothing," said the communications officer.

Swift narrowed his eyes and wondered if he should cut bait. It was looking more and more likely that the aliens wanted to be left alone.

Turning toward J'Tull, he caught her gaze. The Hephaestan's impassive eyes revealed nothing of her thoughts, but Swift was sure that he knew her opinion of the situation.

"Bring us closer," he told Tanner, keeping his eyes locked with J'Tull's for another beat before turning away.

The ships on the viewer grew larger as Exogenesis approached, revealing more detail on the cannons and turrets bristling their hulls. Swift watched for the slightest motion, the faintest hint of aggression, acutely aware that his ship was hopelessly outmatched and outnumbered.

"Anything, Mariko?" he said.

"Still no response." Though the tension in her voice was a notch higher than the overall stress level on the bridge, Swift was satisfied with her composure. In some ways, she was still the least well-adjusted to the rigors of their voyage, but the difference between her demeanor now and at the start of the trip was like the difference between night and day.

"Steady as she goes, Tanner," said Swift…and then something changed.

Nothing on the viewer gave it away. The image of the golden warships, glittering with starlight, could have been a painting, unchanged from one moment to the next.

Somehow, though, before the first shout from Martin, Swift had a feeling that he'd pressed his luck too far. He opened his mouth to tell Tanner to back off.

Before he could get a word out, Martin raised the alarm.

"Incoming!" said the tactical officer. "One of the ships is firing a plasma beam in our direction!"

"Hard about!" Swift ordered his helmsman. "All hands, brace for impact!"

A bright flare surged on the viewer, racing toward them like a comet…then streaking away as the Exogenesis spun around to reverse course. Swift half-fell into his command chair, gripping the armrests as the ship's gravity generators strained to compensate for the sudden change in direction.

"They missed," said Martin. "But I'm quite sure they meant to."

The stars on the screen stopped spinning. "A shot across our bow," said Swift. "There's that hello we were waiting for."

"We are fortunate that they were not in a more talkative mood," said J'Tull.

"Turn us about and hold position," said Swift, leaning forward in the command chair. Onscreen, the stars slid around again and the fleet reappeared, shrinking as it moved away.

Swift rubbed his chin thoughtfully, watching the giant ships recede. "Where are they headed?"

"Barring any course changes, one inhabited world lies directly in their path," said J'Tull. "If they continue at their present speed, they will reach Vox in just over  twenty-four hours."

"What do we know about Vox?" said Swift.

"By any chance," said Swift, "do they happen to have defenses capable of repelling an invasion fleet?"

"Well then," said Swift, rising from the command chair. "I guess we'll be paying them a visit."

Expecting an argument, he turned to J'Tull, but she said nothing. She didn't have to; when it came to guessing her opinion on risky plans, Swift was a mind reader.

"What's the current speed of the fleet?" said Swift.

"At any time since we've been following them," said Swift, "have they gone faster than G2?"

"Good," said Swift. "If that's their best speed, we can get to Vox before they do."

"Like Paul Revere," said Swift. "We offer a warning and ride out of town. 'The British are coming.'"

J'Tull stiffened. Swift thought that if she stiffened any more, she would snap. "And what do you hope to accomplish with this warning?" she said. "Incite a global panic? Throw the planet into chaos before the fleet arrives?"

Swift sighed and shook his head. "Honestly," he said, "I don't know."

"It is illogical to take an action if…"

Swift cut her off. "If that was Earth out there," he said, "and I was on it, I'd want somebody to warn me."

J'Tull fell silent but did not relax her rigid posture.

"All right then." Swift clapped his hands together, signaling that the matter was no longer open for debate. "How long will it take us to reach Vox at G5 speed?"

There was no delay in Tanner's response, so Swift knew that he'd been running the numbers before the question was asked. "A little over twelve hours, Captain."

Swift nodded. "Plot a course to Vox, Ensign. And give those ships out there a wide berth."

"Aye, sir," said Tanner. Swift noted that the helmsman didn't touch a control, meaning that he'd already plotted the new course. As always, Tanner was a step ahead, thanks to a lifetime of piloting experience; having grown up on a deep space freighter, he'd been driving spacecraft since about the time he was in diapers.

Swift keyed the communications panel on the arm of his chair, opening a channel to Engineering. "Zeke?" he said, calling for his chief engineer and good friend.

Zeke's Southern accent filtered from the speaker. "Here, Cap'n!" He was shouting, so he must not have been near a comm panel.

"We need G5 for the next twelve hours," said Swift. "Any problem with that?"

"Not at this time," shouted Zeke through the speaker. "Thanks for the heads-up."

Swift switched off the comm panel and lowered himself into the command chair. Leaning his elbows on his knees, he folded his hands and stared at the ships on the viewer, distant flecks of gold drifting into the glittering starfield.

On the verge of throwing caution to the wind for the umpteenth time, he hesitated. Putting his ship between an invasion fleet and its target might just be the most foolhardy action he'd taken yet…which was saying a lot. Still, he could not dismiss his rationale for getting involved: if that was Earth out there, and he was on it, he would want to know what was coming.