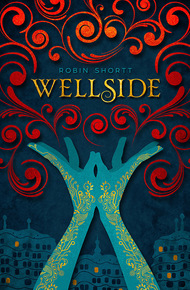 Robin was born in Canberra and lives in Vancouver. His stories have previously appeared in Andromeda Spaceways Inflight Magazine and the Canberra Speculative Fiction Guild anthology Winds of Change.

Ben is stuck. His parents' divorce left him trapped in a backwater town, and he's just been caught breaking into a fairly big corporation's servers and they're going to try him as an adult.

Essa is also stuck. A vengeful ex-lover left her trapped in a backwater world, and she has no way back home to the Well, the vast bottomless pit lined with doors to countless realities.

A lucky accident (not so lucky for Ben) frees Essa and now they're both in the Well, with its invisible lizards, cities hung from cats'-cradles and Library made of sand.

Essa wants revenge. Ben wants a way home. The awakening of an ancient threat to the Well puts both their plans on hold. On the run, their only allies a clockwork spider and a girl made of iron, they'll have to work together to save all the worlds.

Wellside, an Aurealis award finalist by Robin Shortt, is a tour de force of subgenre fusion that just cries out for the attention of someone like Guillermo del Toro. High-school senior Ben has been caught breaking into a fairly big corporation's servers and they're going to try him as an adult. Essa has been trapped on Earth by a jealous lover, with no way back home to the Well, the vast bottomless pit lined with doors to countless realities. Ben and Essa eventually find a way into the Well, with its cities hung from cats'-cradles and Library made of sand, where an ancient threat is awakening. On the run, their only allies a clockwork spider and a girl made of iron, they'll have to work together to save all the worlds. – Athena Andreadis

Rain dulls everything. It turns the grey flagstones almost black. The deep grooves in the stones have overflowed into puddles the girl has to work around with her chalk.

Drawing is difficult. The chalk clots and blurs, but the girl remains intent on her task. She's covered a fifth of the courtyard already, and it's not small.

The grooves in the flagstones form looping paths, complex interlocking circles. They track the stately dance of the three suns through the days and seasons, but right now, under the lowering sky, they might as well be random scribbling. The chalk patterns look random, too, but the girl's hand is assured and never hesitates.

Rain beads on the glossy black leaves of the vines that cover the courtyard's towering walls. It beads in the hair of the man who watches from the far side of the courtyard and settles on his coarse black robe. The man is tall but the Governess beside him is a head and a half taller. Her skin, stretched tight on her elongated skull, gleams a pearlescent white. Her high-collared dress doesn't hide how inhumanly spindly she is, and he wonders if she can even stand without her long steel cane. The dress, like her tightly braided hair, is a brilliant red, and even somewhat dulled from the rain, it's still the most vivid thing in the courtyard; he could almost hold his hands up to her for warmth. She doesn't breathe through her bud-like lips but through the double row of holes marching up her long white throat. The sound puts the man in mind of an ocean, waves rising and falling.