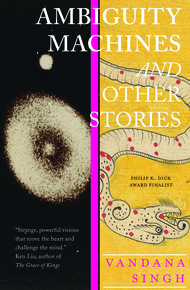 Vandana Singh was born and raised mostly in New Delhi, India and currently lives in the United States near Boston, where she professes physics and writes. Her short stories have appeared in numerous venues and several Best of Year anthologies including the Best American Science Fiction & Fantasy and she is a recipient of the Carl Brandon Parallax award. She is the author of the ALA Notable book Younguncle Comes to Town and and two collections of short stories, The Woman Who Thought She Was a Planet and Other Stories (Zubaan, Penguin India) and the Philip K. Dick Award finalist Ambiguity Machines and Other Stories.

Ambiguity Machines and Other Stories by Vandana Singh

In her first North American collection, Vandana Singh's deep humanism interplays with her scientific background in stories that explore and celebrate this world and others and characters who are trying to make sense of the people they meet, what they see, and the challenges they face. An eleventh century poet wakes to find he is as an artificially intelligent companion on a starship. A woman of no account has the ability to look into the past. In "Requiem," a major new novella, a woman goes to Alaska to try and make sense of her aunt's disappearance.

Singh's stories have been performed on BBC radio, been finalists for the British SF Association award, selected for the Tiptree award honor list, and often reprinted in Best of the Year anthologies. Her dives deep into the vast strangeness of the universe without and within and with her unblinking clear vision she explores the ways we move through space and time: together, yet always apart.

Ambiguity Machines and Other Stories by P. K. Dick award finalist Vandana Singh is a collection of fourteen deeply humanistic, elegiac stories that look into the hearts and minds of philosopher scientists attempting to come to grips with not just the agonies and ecstasies of their invariably demanding vocations and with often fraught life circumstances but also with disconnection and irrevocable loss. The stories range from barely-future Earth to far futures, from steampunk to space opera overture, from guests in dilapidated hotels to pilots of alt-matter starships—but the shimmering thread that runs through them all is how limited our perceptions can be, and how crucial it is to keep all frequencies open. – Athena Andreadis

The thought of the letter lying on her desk in the untidy apartment was like a little time bomb ticking in her mind. Varsha told Chester about it, between the steamed mussels and the fish course.

"So I'm going to Alaska for spring break," she ended.

He had been holding her hand in that ostentatious way he had whenever they were in a restaurant known to be a White Purist hangout. He let go of it, looking hurt.

The seafood place was a hole-in-the-wall with a clientele that clustered around the TV screen and yelled epithets during football games. The AugReal entertainment was of poor quality—floating sea captains and naked ladies, mostly, but the food was fantastic. Chester liked to live on the edge, take her to places like this, challenge the status quo. She pulled down her Augs to look at him in the world: the blue eyes, the little cut on his cheek, the slight pout of his lips, a tendril of graying brown hair sticking damply to his forehead from the steam still rising off the dish of mussels, and thought: he's really quite a kid, even though he's eleven years older than me. That was the attractive thing about him, this childlike quality in a brilliant young professor, although at this moment it was annoying.

"Atlanta can wait," she said firmly. "This is my favorite aunt we're talking about."

"You were going to go in the summer."

"Didn't you hear what I said? The place is closing ahead of schedule. I have to get her things."

It hit her again that her aunt Rima was dead, had been dead for more than a year, that there was no relief from the shock of it, no matter how many times she mourned. And Chester was being a jerk right now. And she had homework to finish, grad school being what it was. She got up, grabbed her bag, and turned and walked away from him, from his shocked face, his half-suppressed "Varsha!", the catcalls and laughter from the men at the bar. At the door she looked back very briefly—he was rising to his feet, arms reaching out, his face filled with rage and bewilderment. The night outside was cold—she fell into her familiar jogging rhythm, ignoring the glances of strangers, feet pounding on the pavement, bag strap tight across her chest—all the way to the T-station at the corner.

The tragically delayed letter was lying on her desk. I'm coming, I'm coming, she said silently to Rima. Just like you wanted me to a year ago, I'm coming to Alaska for spring break.