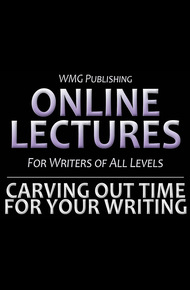 WMG Publishing Presents: Carving Out Time for Your Writing by Dean Wesley Smith

USA Today bestselling writer Dean Wesley Smith talks about how to carve time out of your busy day to write. And what it takes to write a lot of books every year. You will be surprised.

This lecture is often very blunt and to the point, but Dean's real-world methods of helping you find time and maintain that time to write are invaluable.

These eight videos may change, for the better, how you look at your writing.

The hardest thing in the world for writers to do is find the time to write. Mostly, that's because writers believe they need big chunks of time—hours or even days. In this lecture from WMG Publishing, Dean Wesley Smith explains how to make even ten minutes valuable to your writing career. In eight videos, he provides wisdom and systems that will get you to the keyboard, even if you have no time. – Kristine Kathryn Rusch