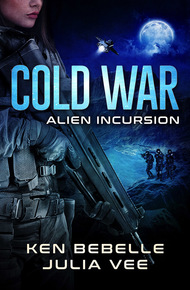 Julia Vee likes stories about monsters, money, and good food. Julia was born in Macao and grew up in Northern California. She is a graduate of the Viable Paradise workshop.

Ken Bebelle makes arms and legs by day, and makes stories by night. He lives in Orange County, CA and loves eating snacks that are unhealthy for him.

Cam wished she had at least finished her coffee before heading off on this bug hunt, but she wasn't about to argue with Colonel Phillips. Aliens in the green zone left no time for niceties. Now she hunted with her unit, the eight of them roasting in their warm weather tactical suits, scrambling across the scrubby Sierra Nevada terrain.

They crested the last rise, with Jonesy on point. Jonesy's muscled frame cast a long shadow in the late afternoon light. She stepped up beside him and raised a hand to her chest, anticipating that old pain. It was a reflex she'd developed after her injury from defending the retreat from Quebec. What a clusterfuck that was. It was silly, her titanium alloy ribcage didn't hurt at all, but the memory of the injury was still bright, with sharp edges of splintered bone.

The rest of her team gathered around, everyone breathing a bit harder than they should have. O'Neill brought up the rear, huffing under the blast cannon strapped to his back. Her unit had operated under far worse conditions and rougher terrain, but they'd gotten soft at Camp Glenn. Rehabbing injuries in the green zone meant no combat with the Ringheads. No bone-chilling cold, no monstrous aliens dicing up soldiers like slaw, and no holo visits with grieving families to tell them their child had died in combat. Yeah, some aspects of life at Camp Glenn aren't so bad after all.

Cam zoomed in through her helmet visor to assess the devastation of Segovia below. Curls of dark smoke rose from the rubble of the tourist destination. Only the Segovia Village Inn remained standing. The Inn's distinctive replica medieval stone structure appeared intact, alone in the ravaged central square. In the distance the setting sun dazzled off the mirror surface of Lake Tahoe.

A low whistle came from her left and Cam turned to see Jonesy shaking his head, "Man. This looks bad, LT."

Cam nodded. "Yeah, but why does Phillips think it's Ringheads?"

Cam took a deep breath, still guarding against the sharp stitch that didn't come. "We'll take the Inn and set up shop there. Two entry points, Bravo team take the south side. Assess the ground floor and radio the all clear."

O'Neill nodded as Burke, Garcia, and Cho formed up behind him. "Bravo team is ready."

Nell paced the edge of the cliff, calmly firing in pitons at regular intervals. After the last one, she tucked away the gun and flaked out the ropes. "I don't care what it is, but we better not come back late. I have a hot date tonight."

Mack bent down and let out a low wolf whistle. "I saw you flirting with that pilot."

Nell gave a throaty laugh. "He can take a number, honey." She leapt off the edge.

O'Neill put a hand to his chest and faked a stagger. "If I were fifteen years younger…"

Cam sighed at their antics. "Mount up Wolves, we got recon to do."

God, she hoped not. The thought of tangling with Humans First terrorists left a sour taste in her mouth. Ringheads were almost better. At least with aliens, she knew for certain who the bad guys were. Checking the darkening skies above, she saw no signs of the dreaded Ringhead jump ships.

"Doesn't matter who it is. We get in and do our jobs."

Nods all around and the Wolves clicked in, ready to rappel down the steep cliffs and shortcut the longer drive along the sole road in and out of Segovia Village.

O'Neill grabbed Cho by the arm and walked him to the cliff's edge. "Let's pop your cherry, kid." He launched them both into the emptiness. O'Neill had taken Cho under his wing. With the grizzled veteran's tutelage, Cho was becoming a natural weapons master. Cam hoped it was enough for whatever tonight had in store for them.