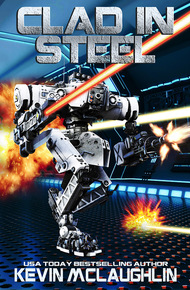 Clad In Steel by Kevin McLaughlin

When the alien Naga attacked Earth, they took everything from Owen McInness. His home was destroyed, his parents killed in front of him. He hated them with every fiber of his being and dedicated his life to making them pay for what they'd done.

But that anger was burning him up from the inside. Soon his Academy career was in tatters. Owen is offered one final chance to make a difference – if he can get over the hate boiling inside him. But redemption is never easy, especially when one's heart is clad in steel.

"Hey, Mac! Head out of the clouds," Kowal said.

Owen jerked his controls to the left. He'd almost bumped into her suit as she retreated from a pair of Bugs. He turned and joined his machine gun fire to hers. Their collective fire burned the enemy to bits.

"Don't be sorry, be good. Head in the game," Kowal said. Then she was moving again, heading forward to support Roberts.

She was impressive. One hell of a fighter, maybe the best on their team. Fast, steady, and brave, she was always scoring the best of the lot of them. Owen was impressed. He'd have been even more impressed if she wasn't still busting their balls about working harder, but in a way that was good, too.

"Contact left," Thompson said. "No eyes on, but it's showing on my radar."

Owen turned his Armor to face the incoming signals. He spotted them at once and froze in place.

There must have been a dozen of them, bounding over the field toward him. Each one carried a rifle raised to shoot. In seconds they'd hit the exposed flank of the Armor unit and tear them to shreds.

The memory of the Naga he'd killed flashed through Owen's mind again, rage pulsing like a furnace blast through him. "Naga on our flank, wheeling to engage."

It would feel good to take some of them down. The Bugs were fine. It was the Naga he hated.

"Negative, McInness! Naga are green for this exercise," Roberts said. "Mac! You hear me?"

The message reached Owen's radio, but he wasn't listening. He dropped targeting crosshairs on the nearest Naga and prepared to send a burst of lead into it. This would be like mowing the lawn…