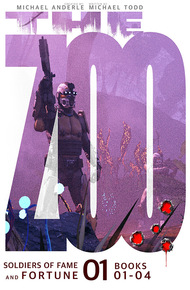 Soldiers of Fame and Fortune: Vol 1-4 by Michael Todd and Michael Anderle

From the fertile imagination of bestselling author Michael Anderle…

Holly is beginning to understand what her gut has been telling her, and it isn't a pretty sight.

Will she listen to what she is learning, or is she feeling the pressure from New York?

JB is telling her stories, but does he have an ulterior motive? And if he does, is it better for Holly to know it…or not?

Will each of them find the solution they need?

Holly is back, learning about another story ripped out of the ZOO. But this one seems too impossible to be true. HOW MUCH can one person drink and not shoot themselves?

Can she learn enough about the ZOO to become comfortable with the idea that she can make it inside, and back out again safely?

The more she learns, the more concerned she gets.

The future is looking interesting and humorous, except for the death part.

Holly stepped out of the shower and fumbled for her towel. The tiles beneath her feet were warm, like everything else in the desert. She didn't much mind it. She was used to the heat of LA, Hawaii, Pakistan, and India. Pretty much wherever the Firm sent her was hot. This new mission wouldn't be any different.

She wiped her hand across the fogged-up mirror and towel-dried her hair. She ran her fingers over the soaps and lotions lined up on the counter and selected a lotion. She's purchased them from one of the small stores that had popped up on the American side of Wall 02. The Firm was American, so it wasn't surprising that they had recommended that side to her. It wasn't what she was looking for. The military presence was too large, there was too much structure, and there was too much order. She wouldn't get the whole story of the Zoo over here.

Her phone rang from the main room, and she put down the lotion and pulled on her silk robe. "Holly P. Smith here."

The voice on the other line was familiar. "Holly, it's Rod. How's it going out there?"

Holly sighed. She was in a small, plain room with a double bed. Military-grade blankets with hospital corners and a small desk in the corner. "Oh, you know, living the dream. If you consider three hots and a cot the dream."

Rod chuckled. "Not quite your cup of tea out there, is it?"

Holly sighed and walked to the window. Below her, a small town bustled. Mostly uniformed Americans but there were a few roughnecks. "It's not that. I've been to worse places. Remember, I slept in a tree-house three years ago. I just don't think I'm going to get the information I'm looking for over here."

Rod sighed. "I don't know why you don't take the gig. It would be over and done with by the time you finish your research."

Holly grabbed her bra and panties from the end of the bed and shimmied out of her robe. "The Firm wants me to go into The Zoo. That's not just some walk in the woods. I've heard stories. I want to know everything I can about that place. I need to know what I'm signing up for before I make any decisions. Money isn't a motivation this time, you know that. Shit, I'm not sure you could offer me enough at this point. How much would they have to pay you to pull on one of those fucking suits and parade your ass through an alien jungle?"

Rod paused. He had a muffled exchange with someone on his end before coming back to the conversation. "You and I called this fuckery years ago. We knew when the Zoo was first created or took over, however you want to look at it, that the Firm would eventually send someone out there. You're the best chemist the Firm has. Hands down. You scour the ends of the earth for the perfect concoction of ingredients for these drinks. I always knew it would be you."

Holly sneered. "Yeah, I was hoping they forgot about me. Whatever. I'm catching a van to the other side. I hear the French, Indians, and Israelites are a bit more open and honest with their opinion of whatever the hell is out there."

Rod clicked his tongue. "You sure that's a good idea? I heard it's pretty rough over there."

Holly threw her head back as she laughed. "Are you fucking serious? First of all, I'm an Indian American. I'll fit in, no question. Secondly, I've been in the pits of fucking hell with roughnecks like these for years. I got this."

Rod let out an amused sigh. "All right, but don't go messing up that pretty little face. It's your way to good information."

"You just worry about holding down the office. I'll do the heavy lifting, little man."

With a smirk, she hung up and tossed her phone on the bed. She looked at her watch and cursed. Holly put a bit of a pep in her step, pulling on her pantsuit and throwing her other things in her bag. She knew the guy that promised her a seat in the van wouldn't hold it for her and she was determined to get to the other side of Wall 02. She hurried through the hotel, dropping her key at the front desk and rushing out the door. She wrapped a thin scarf around her neck and pulled it over her mouth and nose to block the blowing sand. Until a couple of years ago, the wind hadn't existed. The Zoo brought many changes.

She made her way across the small military town and spotted a tall, burly man standing next to a van. She had done business with him before. He moved people from the American side of the Wall to the French, Indian, and Pakistan side. It cost her quite a bit to get a seat, but she had the money to spare. Besides, in this case, information was more valuable than coin. She wanted answers. Real life stories from inside the Zoo. She wanted to know what she would be facing when she, if she, decided to make the trek herself.

"You pack light for a girl so prim and put together," the large man mused. There was sand stuck in his beard.

Holly handed him an envelope. "There's a little extra in there, with my thanks."

He looked at the envelope, then eyed her. He opened the cargo van's sliding door. "Whatever answers you're after, the Zoo is no place for you."

Holly pulled herself halfway into the van. "I paid you for the trip, not your advice. And you'd be surprised what a girl like me can keep hidden in such a small duffle bag."