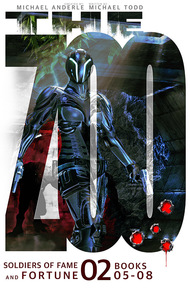 Soldiers of Fame and Fortune: Vol 5-8 by Michael Todd and Michael Anderle

Holly must deal with two problems simultaneously—a ghost from the ZOO and her friend JB dying.

Has Holly learned enough from the stories to trust anyone in the ZOO?

Hickok seems trustworthy, but is she?

Holly needs more information about what is available and what problems she is facing. Can she whip up something quick and dirty for JB to give her time to find a more permanent solution?

Holly is back, but this time she is the person who might be making the stories.

Can Holly learn enough about the ZOO to help JB, and will Hickok be willing to go into the ZOO for her?

The more she learns, the more her concern intensifies.

ARE YOU READY TO ENTER THE ZOO...AGAIN?

The future is looking interesting and humorous, except for the dying part.

Holly ran her hands across the beautifully-etched desktop in her new apartment, closing her eyes and breathing deeply, then coughing. The annoying thing about living above the shop was the constant wafting scents of burning metal and grease, although it was nothing a few candles brought in from New York couldn't fix.

She opened her laptop and continued typing the story from the day before, a tale that was too improbable for her to fully wrap her head around. She was actually glad at that moment for her eidetic memory; otherwise, she would have only remembered the dramatic parts. This story had been saved as, No One Remembers but Us: An Unbelievable Badass.

As her fingers began to rapidly move over the keys, her phone buzzed. She groaned and grabbed it, putting it to her ear. "I really thought that by now you would have given up on calling me in the middle of the night."

Rod hissed. "Good morning to you too, bitchy jungle woman. Somebody miss their coffee today? I try to time it perfectly."

Holly glanced at the mug on her desk, realizing she had only taken a few sips. She grabbed it and let the hot liquid wash into her mouth. Swallowing, she shook her head. "No, but I don't think I need a babysitter. The company must really want to get me in there."

As Rod cleared his throat, she heard the sounds from his balcony in the background. "Actually, I heard you had moved out of the hotel. I called there last night your time because your cell went straight to voicemail."

Holly grimaced. "Yeah, I forgot to charge it. Was listening to some really...valuable information about the Zoo. And yes, I moved out of the hotel. I figured I would be here for a while, whether I take the contract or not, so I wanted to feel more comfortable and at home. There was an apartment for rent down the street, and it was the right price and the right size for me."

Rod snickered. "They have two-thousand-square-foot lofts out there?"

Holly rolled her eyes. "Despite what you think based on my condo in the City, I can be pretty happy with a tiny studio. Actually, I was happy in Zimbabwe in my tent...after they put a floor in it. Those ant bites nearly killed me."

Rod shivered. "I remember that. Not something I would recommend you ever do again."

Holly ran her hand over a scar on her arm. "Me either."

Rod yawned loudly. "So, do you need anything out there in the slums to make it more manageable? I can get a care package together."

Holly wanted candles, but she wasn't about to ask Rod for them. There was always a catch. "Just that you stop your constant nagging. That's free."

Rod laughed. "I got something else that's free, but I don't think it's quite big enough to reach all the way out there."

Holly pretended to gag, then opened her mouth to say something, but there was a loud banging on her front door. "Oh, so sad, gotta go. Enjoy the hellish snow."

Before he could protest, Holly ended the call and jumped up from the chair, skipping toward the door. She unlocked it and flung it open, assuming it was Amanda. "Did you come up for some coff...oh."

The woman standing in front of her was tall, with tanned skin and bright eyes. She had a toothpick sticking out of the corner of her mouth, and a black hood pulled over her auburn hair. Her clothes were worn but not tattered, and she had a pistol on each hip. Her boots were military issue, and she looked at Holly as if she had known her for years.

Holly cleared her throat nervously. "Sorry, I thought you were the landlord. Uh...can I help you with something? If you are here for the shop and you didn't see her down there, she should be back soon."

The woman blinked and took a deep breath, walking past her into the apartment. "No, I came to see you, Holly. You might want to close the door for privacy, though."

Holly looked at the door and then back at the woman for a minute, contemplating whether to make a run for it, close the door, or just stand there with it open. Finally, she decided to close it. There was no reason for anyone to have an issue with her. She shut the door and walked to the center of the room, her arms crossed on her chest. "How do you know who I am? I mean, I don't think we've met."

The woman didn't respond, just walked over to the desk and looked down at Holly's laptop. Something caught her eye, and she turned it toward her with a chuckle. Holly hurried over beside her. "Those are just stories I've been told."

The woman smiled. "I know. I was in the bar for the last couple of stories that JB has blabbed to everyone. This one I was a bit surprised to hear."

Holly looked down at the screen. "Yeah, it was a good one. Wild Bill Hickok. It definitely surprised me."

She smirked. "Well, you can rest assured, she's not dead."

The woman turned and Holly narrowed her eyes, watching her walk across the room. "How do you know that?"

The woman stopped and stared back at her. "Because I'm her."