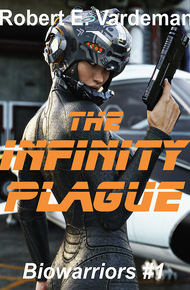 Biowarfare weapons in the late 21st Century are too dangerous to develop on Earth. Jerome Walden and his brilliant research team are starlifted to the planet Schwann to conduct experiments designed to counter Soviet Latino Pact efforts. Schwann is not only a research base for the North American Alliance but also for the Sov-Lats and a space faring alien species intent on destroying all humans. Double dealing, spies, and deadly spaceborne kinetic weapons are only a part of the dangers facing Walden, his team, and his artificially enhanced, intelligent canine assistant, Egad when the Infinity Plague is released. Can the intrepid scientists and their military team stop this doomsday weapon before all human life is snuffed out?

They stood, staring at the fiery debris raining down on the launch port. Major Zacharias was the first to recover. He touched his lapel com-link and barked, "Seal the area. Drop all sky units immediately! We have a terrorist situation. Repeat, we have a terrorist attack in progress."

"No!" Miko Nakamura held up her hand. The hardened edge gleamed dully in the light from the burning pieces of cargo shuttle still falling. "There is no need."

"I do not think so, Major. Accidents happen." Nakamura glanced over at Anita Tarleton and Walden.

Walden rocked back and forth, feeling as if someone had ripped the ligaments from his knees. He wiped sweat off his forehead and looked at Anita. Her face had turned as white and shocked as he felt.

"It blew up." Her voice was cracked and shaking with emotion. "That could have been us."

"Was it a robot shuttle?" Walden asked. He was instantly sorry for asking. He read the answer in Zacharias' expression. Men and women had died. The only consolation lay in the abruptness of their deaths. They couldn't have had an inkling of anything wrong.

"There is no need to cordon the area. It is more important that the launchings continue according to schedule," said Nakamura. The way her words snapped out—crisp, clean, and forceful—robbed Zacharias of his certainty.

"Why not?" the major asked. "The port has an unblemished launch record—except for terrorist activity."

"My forces finished a sweep of the field less than an hour before launch."

"That's enough time for a trained group to infiltrate and sabotage." Some of Zacharias' confidence returned.

"We left behind sensors. We are not fools." Nakamura ran her fingers along the decorative fringe on her left sleeve. Walden wondered what signals were being sent for her to monitor. He did not see the woman as the type to have nervous habits. With the proper electronics woven into the fabric, light touches on each fringe strip could send and receive coded messages—and probably did.

"The Sov-Lats are behind this." Medals jingling, Zacharias rushed into the elevator cage when it opened. Walden and Anita hung back. To their surprise, Miko Nakamura did not join the major. She let the cage sink quickly into the depths of the launch complex.

"Major Zacharias jumps to unwarranted conclusions," Nakamura said in her soft, deadly voice. "I assure you that this was not terrorist activity."

Walden jumped when Egad pressed his head against the man's hand. Mismatched eyes stared up. The dog wanted to speak but had been well trained. He wouldn't show his abilities in front of the Japanese advisor.

"Why not? They tried to assassinate your ambassador and a roomful of people at the New Year's party last week," said Anita.

"There was much about that attempt I find confusing," Nakamura said in a confident voice belying the words. She gave the impression of finding nothing strange; she had everything under strict control. "The sniper was killed too easily. He was used as a diversion to keep us from finding the mechanically timed bomb." She paused, two fingers resting lightly on her cheek as she thought. "He was the victim. A falling out occurred in the terrorist ranks. From our work, we believe we have located the Sov-Lat agent responsible. She is nullified."

"So why couldn't another group have been responsible for this?" demanded Anita. Her temper replaced the numbing shock she had experienced watching the shuttle be destroyed.

"No reason, except that I tell you it is so. You and the major are far too apprehensive. A Western failing, I am sure." Nakamura bowed slightly and turned to the elevator cage, which had returned from delivering Zacharias to his destination in the buried launch control center.

Egad nipped lightly at Walden's hand. The scientist waited until the elevator doors closed and the soft sighing and static crackling of the superconducting elements inside marked the descent of the cage.

"What?" Walden said softly. He knelt, holding the dog's massive head in his hands.

Walden frowned. Anita spoke up. "She might have blanked out her pheromones to prevent anyone using a surface acoustic wave detector to track her."

"Possible," mused Walden. "And she accused us of being paranoid." He looked across the launch field. Mech crews worked to pick up the still smoldering debris from the destroyed shuttle.

"Jerome." Anita held up her wrist to show the balefully blinking red light on her watch. "It's time to go."

The dog shook his furry head. "Don't like being around women with no odor. Love Anita." The dog pulled free of Walden and went to thrust his head against the woman's hand. Egad sniffed loudly.

"I like you, too." Anita gave the dog a quick kiss and then stood. "What are we going to do? Go on the next one or wait?"

Walden heaved a deep, steadying breath. "This one," he decided. "If Nakamura is on it, so are we."

Anita cocked her head to one side and looked at him quizzically. "You trust her that much? Even Japanese Empire military advisors make mistakes."

"Who do you want to go with? Zacharias or her?"

"Good point. Let's lift for the Hippocrates. I'm tired of Earth and everything blowing up around me."

Walden said nothing to this. A single glance at the destruction wrought by two factions too terrified of nuclear weapons to ever use them convinced him Schwann might be a better place. No matter that they went there to further the madness on Earth. It would be better not thinking of the viral destruction he and Anita and the others in his research team might unleash.