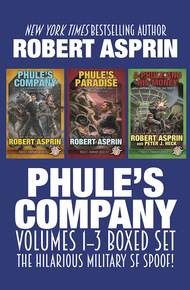 The few. The proud. The stupid. The inept. After being court-martialed by the Space Legion for ordering the strafing of a treaty-signing ceremony, multimillionaire Willard Phule receives his punishment: He must command the misfit Omega Company on Haskin's Planet, a mining settlement on the edge of settled space. At his duty station, he leverages his personal money and a knack for managing people to get the company to come together as a unit. And Phule's company operates with their own unique tactics….

This is science fiction at its funniest.