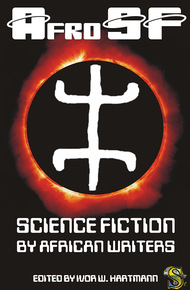 AfroSF is the first ever Pan-African anthology of Science Fiction by African writers only. It is comprised of original works from stellar established and upcoming African writers.

The inaugural volume of the AfroSF anthology series features the work of Hugo, Nebula and World Fantasy Award-winning author, Nnedi Okorafor, as well as Tade Thompson and other stars of African SF. In this first ever exclusively Pan-African anthology, Ivor Hartmann has assembled an excellent introduction to and appreciation of some of the best speculative fiction written by African authors. – Tenea D. Johnson

She sliced through the water imagining herself a deadly beam of black light. The current parted against her sleek smooth skin. If any fish got in her way, she would spear it and keep right on going. She was on a mission. She was angry. She would succeed and then they would leave for good. They brought the stench of dryness, then they brought the noise and made the world bleed black ooze that left poison rainbows on the water's surface. She'd often see these rainbows whenever she leapt over the water to touch the sun.

The ones who brought the rainbows were burrowing and building creatures from the land and no one could do anything about them. Except her. She'd done it before and they'd stopped for many moons. They'd gone away. She could do it again.

She increased her speed.

She was the largest swordfish in these waters. Her waters. Even when she migrated, this particular place remained hers. Everyone knew it. She had not been born here but in all her migrations, she was happiest here. She suspected this was the birthplace of one of those who created her.

She swam even faster.

She was blue grey and it was night. Though she could see, she didn't need to. She knew where she was going from memory. She was aiming for the thing that looked like a giant dead snake. She remembered snakes; she'd seen plenty in her past life. In the sunlight, this dead snake was the colour of decaying seaweed with skin rough like coral.

She was nearly there.

She was closing in fast.

She stabbed into it.

From the tip of her spear, down her spine, to the ends of all her fins, she experienced red-orange bursts of pain. The impact was so jarring that she couldn't move. But there was victory; she felt the giant dead snake deflate. It was bleeding its black blood. Her perfect body went numb and she wondered if she had died. Then she wondered what new body she would find herself inhabiting. She remembered her last form, a yellow monkey; even while in that body, she'd loved to swim. The water had always called to her.

She awoke. Gently but quickly, she pulled her spear out. Black blood spewed in her face from the hole she'd made. She quickly turned away from the bitter-sweet tasting poison. Now they would leave soon. As she happily swam away in triumph, the loudest noise she'd ever heard vibrated through the water.