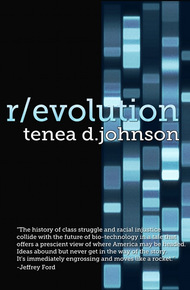 Tenea D. Johnson lives near the Gulf of Mexico where she builds an arts & empowerment enterprise. Her short fiction appears in anthologies like Mothership: Tales from Afrofuturism and Beyond, Sycorax's Daughters, and Blue and Gray: Ghost Stories from the Civil War. Her musical stories were heard at venues including The Public Theater and The Knitting Factory. Her books include Starting Friction, Smoketown, R/evolution, Evolution, Blueprints for Better Worlds, and the brand new Broken Fevers. Publisher's Weekly had this to say about her new release: "The 14 hard-hitting, memorable short stories and prose vignettes in this powerhouse collection from Johnson … are astounding in their originality." Her virtual home is teneadjohnson.com. Stop by anytime.

People are starving. Biogenetic adaptations are prevalent amongst the privileged—and the poor are being ground to a sharp and dangerous point. This is the near-future US where in the struggle for survival citizens are pushed to the breaking point as relationships start to fracture along the lines of class and race. These are stories of the leaders and the followers, the victims, heroes, and the everyday people caught in history's wake, chief among them Dr. Ezekiel Carter, a genius in his field who decides to offer genetic reparations to those being left behind. In this world, what will become of the people at the fringes and more than that of humanity itself?

How the Carters Got Their Name

A lot of Black folks are walking around with their owner's last name. Or rather their ancestor's owner. Others are a little luckier. They're Johnson from Son of John. Baker 'cause that's what they did. Cobbler from the skill it took to earn that name. Ezekiel was one of these last. Sometimes he wished he were a son of John, though – 'cause the Carters had earned their name in death, and revolution.

His grandmother only told Ezekiel the story once. He had just finished weeding their garden and stood in the kitchen, gulping down sweet iced tea. Outside it had been hot like it only got in the moist river valley of Kentucky: hot enough to take notice, but not to impose too much on the beautiful day. Grandma Maddie called him into the living room. She sat in her overstuffed armchair, watching one of the reparations protests with the sound turned off. A throng of brown faces filled the small screen, mouthing the same words. Their expressions said more than the placards they held, articulated their position better than a thousand raised fists. Grandma Maddie looked up from the scene and told Ezekiel to sit so she could tend to the rose bush scratches riddled down his arms. He settled at the foot of her chair, his shoulder resting against her knee. With both of Ezekiel's parents long ago passed away – his mother, into the grave, and his father, into the night – Ezekiel and Grandma Maddie shared the small confines of their country home with an uncommon grace.

Grandma Maddie plucked a fat leaf from the plant that stood on the chest near her chair. Above it, a blurry black and white daguerreotype of her great-grandmother hung. Only their expressions differed. Ezekiel's grandmother had deep laugh lines and a ready smile. The woman above looked as if someone had carved worry and hard work into her brow with a sharp stick.

Grandma Maddie broke open the aloe leaf. As she slid her finger through its milk, Ezekiel laid his arm across her lap and began to relax into the folds of her skirt.

"You did some good work out there today, Zeke," she said. "Should be able to get those cabbages into the space you cleared. Maybe some squash and more room for some yellow tomatoes." She said this to watch Ezekiel's face screw up in disgust, knowing how much he hated tomatoes, yellow or otherwise. Even in these food-lean times where gardens were a necessity and livestock a luxury, he would rather go quietly hungry than eat them. She never tired of the joke, and unlike most twelve-year-old boys, neither did he.

Ezekiel had never been like his peers. His genius made him different. Though applying to biology programs left little time to spend with other kids, he doubted they would want to be with him anyway; his daddy didn't. Even with his stratospheric IQ, Ezekiel didn't believe that women or prison or selfishness had kept his father from him – though his Grandma Maddie, the man's own mama, had told him as much.

Because of his father's absence, or perhaps in spite of it, Ezekiel made it his business to know everything there was to know about being a Carter. He had almost exhausted what Grandma Maddie thought it proper to tell him. The Carters, it seemed, had been a raucous bunch right up to his grandmother – though really, it had been her 'dealings with women' that earned her the title. She loved to put it that way, heavy on the sarcasm. The Carters, she said lived loud because they knew that they would die young.

They didn't die from bullets or barroom brawls or overdoses either. Their bodies just turned on 'em one day, made them suffer like hell for a spell, and then gave up with the soul inside screaming. That's the way Grandma Maddie always put it; she had a way of putting things. On this particular day, his grandmother decided to acknowledge his burgeoning manhood by way of telling Ezekiel how the Carters got their name.

"Zeke, today I'm gonna tell you something special." She dabbed the aloe under his eye where a deep groove of blood had sprouted. "Boy, how'd you do that? Looks like it hurts like bajeezus." Looking into his eyes, she said, "You gotta be more careful with yourself." She stroked the soft dense hair on his head. Ezekiel moved closer, breathed deeper.

"It ain't a pretty story, but it's the truth." She paused, collecting another swipe of aloe from the reserve on the back of her hand.

"A lot of black folks walking 'round with their owner's last name. Or rather their ancestor's owner. Others are a little luckier. They're Johnson from Son of John. Baker 'cause that's what they did. Cobbler from the skill it took to earn that name. The Carters are like that. Way back before you or even I can remember, we was slaves. Not like the processing pools in Brandermill or even the way them reparations people talk about it, but real slaves. Hanging tobacco, sweating in the fields, hearts long broke. There are stories for every one of them days, but this is about the day before the day we got our name. The way it was told to me, a young girl had been taken in the night by the overseers. In front of her mama. Which, unfortunately, was nothing new. But on that day something in the mama snapped – like a stepped-on stick that whips up at the one who broke it. She started screaming and jumped on them overseers. Went straight for the eyes, as it was told to me. She broke noses when they tried to restrain her, shattered teeth, closed windpipes with her bare feet, kicking out against all those restraining arms and hands. Four men couldn't stop her fury, the protecting of her child. Outside the cabin the people had started to gather. As it was told to me, their eyes filled the small window and doorway of the cabin. They watched as the mama blinded two of the men, and was working on a third when the head man, himself, came barrelling through the doorway and shot her right there, back of head, like a coward would. Blasted her all over the cabin and the screaming child. By the time the echo cleared, all hell had broken loose."

"The people had caught a fury. Any other day, they might have dragged themselves away. In the morning they would have cried for the woman slung up on a tree, split from hind to head. But not on that day. There was no reason other than their lives."

Ezekiel's eyes nearly vibrated in their fullness. He didn't realize that he gripped his Grandma Maddie's thigh like the last solid thing on an endless sea.

"They ran, not to the paths that led through the woods, but straight toward the bright house on the hill. Some were shot down before they'd even gone a few steps, picked off by the head man. Their arms reached out even in death, trying to grab some of the vengeance surging toward that house. They lit fires in the field as they went, moving as one. The people had no plan, no weapons. They carried only the weight of their years. And with that, they tore the place apart."

In his mind's eye, Ezekiel could see the people moving – splintering wood and tearing down doors. His gaze drifted to the television set, settled on the tumult that filled the screen. The two images merged – all these people fighting for something when there was so little left. The force of their union pulled him away from his grandmother and further into the world. He sat next to her, his back now so rigid and straight it seemed as if his shoulders were pulled from above.

"Soon enough, the head man found more men and more guns. When the shooting and screaming were done, and the birds came back to the trees to soothe the earth that had witnessed it, there were more bodies than people. The folks who had survived were beaten, strung up. Our ancestor, Brother, was one of the first to be put back to work, hefting and carrying the bodies of man, woman, and child. He placed them softly as he could into a waiting wagon. He was so good at the task, so swift and so strong, that they made it his job." Grandma Maddie shifted in her chair and tilted her head with a sad smile. "Brother worked the death cart until he was the one laid."

Tiny scratches forgotten, Ezekiel wrapped his arms around his knees, head cradled between them. He gazed into a distance that he now knew he would someday meet. Grandma Maddie placed her hand on his shoulder.