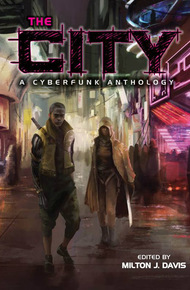 Milton Davis is a Black Fantastic fiction writer and owner of MVmedia, LLC, a small publishing company specializing in Science Fiction, Fantasy and Sword and Soul. MVmedia's mission is to provide speculative fiction books that represent people of color in a positive manner. Milton is the author of nineteen novels; his most recent is the Sword and Soul adventure Eda Blessed. He is the editor and co-editor of nine anthologies; The City, Terminus, Blacktastic, Dark Universe with Gene Peterson; Griots: A Sword and Soul Anthology and Griot: Sisters of the Spear, with Charles R. Saunders; The Ki Khanga Anthology, the Steamfunk! Anthology, and the Dieselfunk anthology with Balogun Ojetade. MVmedia has also published Once Upon A Time in Afrika by Balogun Ojetade and Abegoni: First Calling and Nyumbani Tales by Sword and Soul creator and icon Charles R. Saunders. Milton's work had also been featured in Black Power: The Superhero Anthology; Skelos 2: The Journal of Weird Fiction and Dark Fantasy Volume 2, Steampunk Writers Around the World published by Luna Press and Bass Reeves Frontier Marshal Volume Two. His Steamfunk story The Swarm was nominated for the 2017 British Science Fiction Award. You can contact Milton Davis from his website: https://www.miltonjdavis.com

The City - A Cyberfunk Anthology edited by Milton Davis

The City anthology is a unique creation. It's a concept anthology, a collection of stories where eighteen different authors share their vision of a single idea. It's Cyberfunk, cyberpunk stories that play with future concepts from an African/African American perspective. Most of all it's engaging, exciting, thought provoking and fun. Like the inhabitants, the City is perceived in various ways by the various writers. Some stories intersect, some diverge, but they all entertain. The result is a journey into a unique world described by unique and engaging voices.

Milton J. Davis, not satisfied just with sharing new worlds is sharing a unique subgenre. Cyberfunk is front and center in The City, a work of linked stories with a common setting. No one has left or entered the city in 20 centuries. Welcome to it. – Tenea D. Johnson

You say something to me? Yeah, I'm Knowledge Lateef. What is The City? That's a dangerous question. No one knows how it began or when it will end. No one knows how we came to be here, 20 million souls, 1500 different species all crammed together in plascrete and biosteel. No one's been in or out of the city in 20 centuries. Some have their theories why, some don't care. But no matter whom you are, or what you are, you have a story, don't you? The trick is finding someone who cares to listen. Now keep moving, and be careful what you think, or what you say. There are no secrets in The City, no secrets to The City. The City is always Watching. Now move on. I ain't time for you...

Watch out! Who were they? Runners. The eyes, ears and mouth of The City. What you say? We don't need messengers? Everything is in the Wave? That's exactly why the Runners exist. You keep forgetting what I told you. Nothing is secret to the City...unless it's not on the Wave. If it's on the Wave, The City knows. Want to send a message? Give it to a Runner. They are honest, trustworthy, loyal...and literate. What does that mean? Ha! They can read and write! In any form. Cityzens don't have need to read or write these days. Everybody jacked to the Wave. Oh yeah, they can take care of themselves pretty good, too. How do I know? I used to be a Runner before I found Street Wisdom. Now I spend my time schoolin' folks like you, trying to keep you out of the River. The River? That's another subject.

Who? His name was Jamal. Yeah, I know you probably heard of him. He was a Runner. Jamal knew The City. Some say he'd been from one End to the Other. That's a lie; The City never ends. But he had a vision to make it better. Not just for humans, but for everything. The Runners spread the word and some actually believed he could to it. But what did I say? They are always watching, and they began to pay attention. Then Jamal and every single one of his followers disappeared and everyone forgot, just like that. Everyone except the Runners. Runners never forget.

You just won't go away will you? How do they watch us? We all have Tells, everyone of us. Not tails, Tells. Reach behind you head. Now touch the back of your neck. Right there, that's where it is; or rather that's where it starts. The old books...I mean the old vids say The City used to implant them right after we were created. But it figured how to make it a part of us, just like your heart, you lungs, your brain. It automatically connects you to the Wave...and to The City. Can it be removed? Yeah. You can have it surgically removed, if you can find a Scalper brave enough to do it. But even the best Scalper can't get it all. It grows back. But you can Purge it. Purging will scour your brain of every bit of the Tell. If you survive it, you'll most likely go crazy. Most do. Those that don't become Runners. But then most folks think Runners are crazy, just controlled crazy. Now that's it. No more questions. You're going to get us snatched. Keep it up and the only place we'll be safe is in The Lush.

The Lush? No, it's not a myth. It's real, as real as you and me. The one place where the City can't reach you, where the Watchers can't watch you. Where is it? If I knew I wouldn't be talking to you. I'd be there. People are always looking for it though I'm sure a few have found it. But since they ain't coming back to tell nobody, it stays hidden. Now stop asking questions. They're going to start paying attention.

What? You still asking questions? Okay, last answer, one way or another. The River is the Soul of the City. They say everything comes from it, and everything eventually goes back to it. You ever been to it? Smells like perfection, doesn't it? Water as clear as glass. Makes you want to jump in and swim with fishes, doesn't it? Don't. And never accept an invitation to go for a walk by the River. As a matter of fact, just stay away from it all together. Hey, did you see that? Shit! I knew it! Walk fast and get the hell away from me. They're paying attention! Watchers are coming. Run!!!