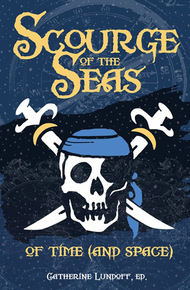 From peg legs to parrots to the Jolly Roger, classic pirates are some of the world's best-known and easily recognizable outlaws. Or are they? These fifteen stories spin new tales of pirates from around the world and beyond, sailing across dimensions, fighting alien monsters and searching for redemption or adventure or even love. Raise the Jolly Roger and sharpen your cutlass (or recharge your raygun) and climb aboard for some unforgettable journeys with pirates as you've never seen them before. Featuring stories by Ginn Hale, A.J. Fitzwater, Geonn Cannon, Joyce Chng, Elliott Dunstan, Ashley Deng, Su Haddrell, Ed Grabianowski, Mharie West, Matisse Mozer, Soumya Sundar Mukherjee, Megan Arkenberg, Peter Golubock, Michael Merriam and Caroline Sciriha.

I am, I admit, a sucker for pirate stories, and this anthology of 15 stories will satisfy anyone who ever wanted to read about queer life under the Jolly Roger. Each story is a well-built world of its own, and the diverse protagonists range from polyamorous Vikings to Hector's widow Andromache, turned pirate in the aftermath of Troy (I literally cheered at the beginning of that one, and sniffled a bit at the end) to, yes, a dapper capybara captain. A winning anthology from Queen of Swords Press. – Melissa Scott

How I came to be marooned on the back of a wandering island is a matter of some debate. Bosun Lisboa would no doubt maintain that I received a rightful punishment for attempting to incite a mutiny against our brawny, blond Captain Alvim. But I would argue that I simply surveyed the ragged, bare-foot crew as to how many members might enjoy a respite from murdering sailors and plundering great stores of half-rotten bananas. I'd wondered if anyone else desired to return to familiar home-shores. Perhaps take up fishing as a source of income.

After the months we'd spent chasing fruitless rumors of Captain Barradas' hidden treasure and slaughtering entire crews of little merchant ships for their pitiful stores, fishing didn't sound so bad to many.

Before you laugh, allow me to point out that a good number of us came from fishing families before we were pressed by naval recruiters or captured by privateers. All I know of navigation and sailing, I learned while hunting the vast silver shoals of sun skates and dragon eels that swam in the shadows of Reinazona's wandering islands. It wasn't the easiest of work nor the safest of trades but then, neither is piracy.

And truth be told, I'd felt far cleaner back when I'd reeked of fish guts and eel shit.

So, after another evening swabbing blood off the deck and listening to the screams coming from the sad little captive in our captain's cabin, I felt a change of occupation might be worth pondering. In hindsight, I acknowledge that I shouldn't have pondered so very loudly. But I'd been under the influence of rum and remorse. And a little more rum, after that. I may have referred to Lisboa as toadspunk; I may have called the captain a turd in a velvet coat—that's beside the point.

The trouble was that Captain Alvim had only just done-in our previous captain—Easal, was his name, I think—who'd only been leading us a week since he himself had done away with the captain before him. There had been a few before that as well. Sometimes, even I forgot that it had been Captain Barradas—him of the maps and riddles and the lost treasure—who'd had me dragged from my little fishing boat to serve as their Almagua navigator. "In the service of our Queen," he'd assured me.

But the wandering islands he expected me to find a way through were strangers to me, nothing like those I'd grown up among. And of course it hadn't taken long before Barradas' patriotic privateering gave way to preying upon any ships he encountered amidst the ever-changing shores of the Laquerla Ocean.

All in all, it made for an uneasy history. And there was me, in the middle of it, sick and drunk. I still argue that I didn't deserve to stand beneath the mizzen-mast, accused of inciting mutiny. Though I readily admit to having upped my stew on the captain's shoes.

Of course, the crew couldn't just murder me and toss my body in the ocean. Deadly bad luck killing an Almagua at sea, even one as defiled with bloodshed as me. Too much of a chance that my fishy spirit would take to the waves howling murder and raise up those black whales on my granny's side of the family. I swore to them that I'd do it too.

"The Doomed Amulet of Erum Vahl" by Ed Grabianowski

Captain Jagga crouched by the quarterdeck rail. Beside her, the steady rattle of lead shot striking the side of the ship rang in her ears. "Hard to port. Put on speed, Tripton!"

The sailing master, his demeanor that of an aggravated professor, was scrambling on all fours above a hatch on the gun deck. "Hard to port," he yelled down into the opening, then turned back to Jagga. "We can't do both at the same time, you know."

Below, the helmsman heard Tripton's call and pushed hard on the whipstaff, cranking the rudder far beneath him and shunting the ship to port. The Hammer of Triel groaned and came about.

The chatter of gunfire and other projectiles against the hull let up for a moment, and Jagga dared a look over the rail. To starboard was the lush jungle shore of Brathi; just aft were the low-slung, golden gunboats of the Redhands, mercenaries hired to protect the coastal trade routes. The same trade Jagga intended to take a piece of for herself. She flashed a manic smile at Tripton. "Do what you can, sir."

Tripton looked up toward the fore of the ship, one last futile spray of lead peppering the rail to his right. The carefully sculpted goatee and wire spectacles riding low on his nose gave him a delicate look, but his skin was weathered and brown, and his gentle, precise voice changed to a sailor's rough bark when he relayed orders for the captain. "Oi lads, straighten out and away from the shore, full sail. Got to get off these breakers." The crew, no longer ducking rifle fire, moved about the rigging and set The Hammer of Triel on her new course.

Jagga watched the gunboats give up the chase and fade into the distance. She'd lost this engagement by coming in too far from shore, her four-mast barque easy to spot against the horizon. The Redhands had been ready for her, and Jagga wasn't overly fond of a fair fight. "Tripton," she called mildly. "A word please."

He joined her on the quarterdeck and they watched the coast recede behind and to starboard, the sleek ship gaining speed as it got farther from shore, slicing along the ocean swells rather than crashing through breaking waves. They were headed south, the wind at their back, the sky clear and blue, though the air was thick with humidity. Jagga eyed Tripton's heavy leather coat. "How you can bear the heat in that thing? I don't think I've ever seen you take it off."

He turned slightly and brushed away some lead shot that was embedded in the folds and creases of the coat, not quite resisting the urge to grin. Jagga laughed.

"My aim is to go another day south and try our luck again," she said. "I consider this a trial run. Now we know the merchants hire mercenaries, and they have guns. Not very good guns, but those Redhand gunboats are too small and fast for us to hit with our cannons."

Tripton shrugged. "I don't see as we have much choice. We can't very well return north. Not without an impressively large amount of gold to bribe our way past your many admirers."

Jagga knew her reputation. They called her Jagga the Ripper, or Jagga the Bitter, or Jagga the Thorn of Gael. In the darker corners of Ulsh and Covengate they had much fouler names for her, filthy epithets that made her smile when she heard them. She'd spent the last year flying the jade flag of the Azeth Rebellion on The Hammer of Triel's mast, patrolling the coast of Ulsh for any shipping between Ulshan loyalists and the exiled royal family. The Azethans paid her well, but when the King of Ulsh came roaring into Jaidh Bay with a full war fleet, she slipped away and headed south. She'd backed a rebellion, the rebellion had been crushed, and now it was Jagga who was in exile.