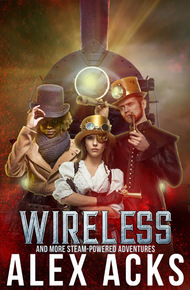 Alex Acks is a writer, geologist, and sharp-dressed sir. A collection of their steampunk novellas, Murder on the Titania and Other Steam-Powered Adventures, is available from Queen of Swords Press. Their biker gang space witch novels, Hunger Makes the Wolf (winner of a 2017 Kitchie Award) and Blood Binds the Pack, were published by Angry Robot Books under the pen name Alex Wells. For more information, see http://www.alexacks.com

Captain Marta Ramos, the most dangerous pirate in the Duchy of Denver, is back and she and Simms are up to their goggles in trouble. Has General del Toro found a way to use the Infected as an army and can Captain Ramos work with her arch enemy, Colonel Geoffrey Douglas, to stop him? Can Simms join forces with the devious Deliah Nimowitz on a jailbreak, some sewer misadventures AND a high society soiree involving tea, a heist and sausages? And what about the Rail King and his nefarious plans? Can Captain Ramos and her crew stop him before he completes his latest dastardly deed, one that may result in Deliah's demise? Check out the next installment of the exciting adventures of Captain Ramos and her valiant crew to find out more!

I included the first collection of Captain Ramos stories in the first Pride bundle, and I'm delighted to share the second. The adventures continue with three linked novellas involving Captain Ramos and her right-hand man, Simms. This is bravura steampunk, set in an alternate Gilded Age American West that feels all too familiar in places, and Captain Ramos is always ready to pluck riches from the too-wealthy, or to stand up for someone in need. She's one of my favorite steampunk heroes, and it's lovely to have her back for more adventures. – Melissa Scott

Meriwether Octavian Simms, known by his own preferences as "Simms" to friend and foe alike, had never thought he'd live to see a day where he regretted his inclination for boredom. The promise of an ordinary, middle-class life, in which one had tea and read the paper and complained about one's tiresome profession—which no doubt had something to do with other sorts of papers, though what one would do with them escaped his imagination at that point—over the breakfast table had always seemed preferable to the sort of life that found one dangling off a fifty foot drop from a rail bridge by one foot whilst being shot at by angry men in uniforms, to pick an example completely at random from his current lifestyle.

And yet, here he was.

Life had been solidly boring for three months and Simms was concerned. No, he'd moved past concerned in the first few weeks, into worried, and was now headed straight for anxious. It was the sort of powerful emotion that had him tugging at his ginger muttonchops, which hadn't done his looks any good, and being unfairly snappy at his young daughter Dolly. And he wasn't the only one who felt as if things were definitely an unaccustomed sort of wrong. Amelia, driver for their vast raiding engine Diabola and former opera singer, had stopped singing. Gregory, the lookout, had taken to leaving knotted bits of string everywhere, to the point that Cook had started depositing them on his dinner plate every day. Lucius, a person of whom no one was yet certain if he was human or a shaved gorilla, had gone through all of the spare fabric in the Devil's Roost for sewing projects and had recently taken to stealing clothing out of the laundry to perform repairs or upgrades that involved things like lace edging and embroidery.

While it was relief that his anxiety took the form of something unexpectedly constructive, it had also caused several minor emergencies in which no one could find their trousers. Even the newest member of the crew, a mathematically gifted woman named Little Wren, intended to replace the still-sorely-missed navigator Elijah, had been cooling her heels for two months with nothing to do but start teaching Dolly her native tongue, and Simms felt a deep suspicion toward his daughter being given any power to call him names he couldn't understand.

The problem was simple to state and impossible to fix: something was wrong with Captain Ramos. While in Simms's opinion, something had been quite wrong with her in a delightfully right sort of way ever since they first met in a fetid jail cell, this was different. It was a wrongness that made of long silences with nothing clever and terrible hiding beneath. It was a lifeless sort of wrongness that seemed to have eaten the captain's words out from inside of her and left a hollow behind. And of course, she insisted that she was absolutely fine, in a sort of perfunctory way that didn't allow for argument.

Captain Ramos had told Simms the barest details of what had come to pass in the Dead Plains while she'd been away, but only after much prompting and stubborn insistence. It was increasingly obvious that something more than what she told him had happened up in the Black Hills, and she wasn't going to talk about it no matter how much Simms nattered at her.

So now he had his own plan. It wasn't a terribly complex one; in fact, it had only one step, which had been "see if Miss Nimowitz has any ideas."