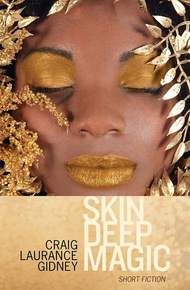 CRAIG LAURANCE GIDNEY is the author of the collections Sea, Swallow Me & Other Stories and Skin Deep Magic, the Young Adult novel Bereft, and The Nectar of Nightmares. His work has been nominated for the Lambda Literary and Gaylactic Spectrum Awards, and he has won both the Bronze Moonbeam and Silver Independent Publishers Book Awards. He lives in his native Washington, DC.

Magic is more than skin-deep. It hides in the folds of a haunted quilt and illuminates the secret histories of Negro memorabilia. Magic reveals the destiny of a great storyteller and emanates from a sculpture by an obscure Harlem Renaissance artist. Magic lurks in the basement of an inner-city apartment building and flourishes in a city park. Magic is more than skin-deep; it shimmers in the ten stories in this collection.

Skin Deep Magic is Gidney's second collection of short stories, this one focusing primarily on African-American women. It's urban fantasy at its finest, each story beautifully crafted, blending myth and magic into unforgettable stories. Reviewers have compared him to Tanith Lee and China Miéville, and I certainly see how his use of language invites those parallels, but he's really a unique voice in queer and African-American writing. These are stories to be savored, and they will stay with you for a long time. – Melissa Scott

Pyschometry, or Gone with the Dust

I've seen that show on TV, where people collect and obsess over mountains of rubbish that decays. And Grey Gardens is one of my favorite movies; I've seen it at least a million times. That movie is like a real life Tennessee Williams play set in a decaying mansion. So, I'm prepared. Or at least I think I am. Possums, raccoons, and feral cats don't really bother me. But fecal matter, urine, rats, and roaches do scare me.

"Here we go," says Philip. And he opens the door to the late Agnes F's bungalow.

"Jesus X. Christ." I say that aloud; I say it two more times in my head.

It's not the stuff that overwhelms me—though there are mountain ranges of it from floor to ceiling. No. It's the smell. The Smell is ripe, rich, and relentless. It has layers, like the finest perfume: must, dust, mold, old paper, and of course, death. The fire marshal found Agnes F gently rotting among her beloved possessions. Rumor had it that she was smiling. The Smell is more than the sum of its parts. It assaults all my senses and deranges them. It swirls and eddies through the hillocks and valleys of junk like a sluggish river. I can see the Smell, rising and curling like cartoon stink lines. If it were a color, the Smell would be the grey-pink of raw organ meat. I swear I can hear the Smell slithering among the mounds.

Philip wrinkles his nose in sympathy. He reaches into his backpack, and says, "Thank God I bought these."

He hands me a face mask before putting his on.

The electricity is off, so we have to use our torches to find the window shutters. As we move through the house, things crunch and crack. I feel no carpet or hardwood floor beneath me. I am grateful that I remembered to wear my shit-kicking hiking boots. (The first time I did this, I was wearing heels!) We finally reach the shutters, and open them, letting light flood into the dark, dank room. I open the windows, to air the room out a little.

"Jeez, Margo," says Philip. "Our Agnes was a bit of a collector. She certainly wasn't politically correct."

They line the shelves and stare at us with their dead eyes, in frozen poses. The comical, inhuman stances. The dark fabric to represent skin, the tufts of wool to represent hair. They watch us as we walk in the room. These dark dolls and Negro memorabilia were Agnes F's prized possessions. I see pickaninny dolls, girls with plaited hair sticking out at all angles, and the boys munching on felt watermelons. There are mammies of all kinds, as cookie jars, posters, dolls and syrup bottles. And that's not all. The floor is full of all sorts of weird stuff. Candy wrappers, flour sacks, telephone bills, deeds, and canceled checks. In one corner, I see a lawn jockey poking out from bubble wrap.

"Maybe a house full of raccoons and feral cats would have been better," I say, an attempt at gallows humor.

"You know Jack, back at the home office?" says Philip, "He said he went to a house where the guy kept Nazi memorabilia. Teapots and commemorative plates and shit."

"Well, Agnes and that guy would've made a lovely couple."

"Yeah. Not that we'd be on the invite list—a fairy and a negress."

I flinch at the word negress. Philip means well. I just don't like that word, even if it is used 'ironically.' And here, in this context, it's just hella creepy. "Let's get started," I say, "I don't want to be here too long. My skin's crawling..."

We set up a couple of battery-powered lanterns to add to the natural sunlight. Philip begins pawing through the trash, and I start at the shelves. I take out my digital camera and start snapping pictures. I know that there's a market for this stuff on Ebay and other sites. One man's trash is another man's treasure, the saying goes. After a while, I settle into the rote repetition of the work, and the creep factor subsides.

I like this job. The macabre aspects (i.e., the sudden death of people, their squabbling or distraught long-lost relatives) aren't my favorite thing to deal with. But walking in someone's abandoned house is like entering their mind. It's like seeing the physical manifestations of their memories, and in some cases, their neuroses. I've found war bonds worth a lot of money and pillowcases full of cash. I've also found manuscripts of poetry and novels that never got published, most of them rubbish, but some of them quite good. And one time, in a house, I found a room full of weird, humanoid sculptures made out of bubble wrap and packing tape. They were about as tall as I am, these transparent, deformed people hidden away in an old man's guest room. But the thing I like most about cataloging dead people's estates are the stories that I can piece together.

Sometimes, when I touch things, like a ring or beloved toy, I can get impressions from them. Images, distant voices, smells. Sometimes, an entire story will unfold. I've never told anyone about this. It sounds too New Agey and silly. I can hear my mom saying, "Oh, Margo, you've always had such a vivid imagination." So I keep the impressions I get from things to myself.