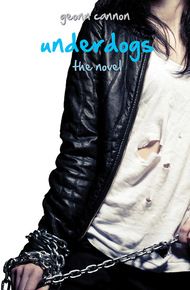 Ariadne Willow is a private investigator with a secret weapon. She's a canidae, a person with the ability to transform into a wolf at will. Using her heightened senses to track and her shapeshifting to follow people without being seen, she's made a decent business for herself and her associate Dale Frye. When one of the richest women in Seattle wishes to hire her, Ari and Dale think their ship has finally come in. All Ari has to do is observe the client's tabloid-friendly daughter, fresh out of rehab, and confirm that she's truly clean.

Ari thinks the case will be a piece of cake, but a moment of shocking violence changes everything. Soon Ari finds herself backed into a corner with no way out, forced to either run or risk losing everything she holds dear by fighting an enemy with unlimited power and resources. With Dale refusing to leave her side, Ari decides to make a stand to remind her enemies that there's only one rule in betting...

Always bet on the underdogs.

Geonn Cannon ticked all my boxes with this novel of a lesbian werewolf turned private detective — and, really, why wouldn't a werewolf, with her heightened senses and ability to pass unnoticed in her other shape, make an excellent detective? This is urban fantasy with a solid mystery at its core, though I loved best the complicated friendship between Ariadne Willow and her loyal assistant, Dale Frye. This is the first book in a long-running series, and still remains a favorite. – Melissa Scott

Ariadne Willow was technically a wolf, with thick brown fur and eyes that tended toward yellow under the correct lighting. Her face and muzzle were dark brown and could make it look as if she was wearing a mask. She was two and a half feet tall at the shoulder when standing at full height. Under ordinary circumstances she could pass for a domestic pet, maybe a German shepherd or a husky, but passing wouldn't help her now.

The back of the lot was marked by a fence that had fallen into disrepair. Ari didn't slow down as she scanned for an opening. The one she found was just barely big enough for her to fit through, although she left behind a few hairs on the splintering slats. The man pursuing her cried out wordlessly in frustration and she heard his bulk slam into the fence when he couldn't stop quickly enough. Ari didn't pause to look back as he started trying to clamber over the fence to continue his chase.

Ari was in a dirt lot now. She found tire ruts and followed them to the street, turned right, and ran into the neighborhood. She passed the Animal Control truck, which was idling at the curb with her overweight predator's partner sitting in the passenger seat with a cup of coffee. Ari crossed the street just before he saw her and shouted for her to stop through his open window.

Dogs in the neighborhood barked in response to her presence to warn her away from their territory. She had gone three blocks before she stopped on the corner and risked a look back. No signs of pursuit. Ari looked around her as she caught her breath. The intersection stretched off into darkness on both sides with no sign of people.

She started walking north, moving at a fast clip in case the animal control guys were trying to catch up with her. The houses and trimmed lawns gave way to a strip mall and Ari walked between the tall stone wall and the back of the building. The pavement was cracked and dirty and stained with old grease and motor oil that formed an almost visible wall in front of her. She moved through the pungent curtain and ignored the delicious odors coming from the dumpsters she passed.

There was a concrete ditch that ended in a narrow tunnel that led under the street. Ari stepped carefully into the ditch and sat on her haunches. There was no real switch she had to flick and no magic button to start the transformation. She simply willed it to begin and she felt her body changing. Her paws twitched against the pavement, her head bowed, and a pitiful whine rose at the back of her throat.

The thick brown pelt receded into her body as her limbs retracted. She stretched her neck out as her face was rearranged into a more human visage. Her bones broke. Both shoulders, every bone in her hand, her hip. Her body assumed its new form and the bones snapped back into their correct arrangement. Ari gasped in pain and relief, baring her now blunt teeth as her muscles twisted under her skin. Sweat poured down her body, dripping off her nose and running down the middle of her back as she crouched on all fours in the drainage ditch.

In place of the wolf was a lithe brunette woman. Her eyes were bright blue, the same as the wolf. The muscles of her arms and legs flexed, her lean stomach ballooned in and out with her rough breathing. Sweat beaded a face that belonged a Renaissance painting rather than crouching naked in a filthy drainage ditch. Her fingers flexed as if testing the texture of the ground on which she was kneeling. Her mouth had reformed into a Cupid's bow, and they trembled as she tried to catch her breath.

Lank hair hung loose in front of her face, her nostrils flaring as she waited for the vice-like pain to relax around her muscles. The aches ran down to the bone, making her tremble as she finally rose up and scooted forward. She reached into the tunnel, past the leaves and twigs and mud that accumulated against the grate after every rain until she found the nylon strap of a duffel bag. She pulled it free and dropped it onto the concrete.

Inside, old clothes from Goodwill were wrapped in white plastic bags from Wal-Mart. The words SHIRT, PANTS, UNDERWEAR were written on the outside of the bags so she knew what was inside without ripping it open. She chose a T-shirt and cargo pants. The army boots that took up the bottom of the bag didn't have laces, but they were tight enough that they stayed on. Her T-shirt had a picture of Daisy Duck on the chest, her faded face distorted by the curve of even Ari's modest bust.

Ari ran her fingers through the rat's nest of her hair, returning it to a semblance of style so she didn't look homeless. An outer zipper on the bag had change, which Ari pocketed before she zipped the bag up again and returned it to her stash. When she stood, pain shot down her spine and she had to bite back a shout. She rubbed the small of her back until the spotlight of anguish turned into a pinprick of light. When she climbed out of the ditch, she saw the Animal Control truck driving slowly down a side street. The passenger was shining a flashlight out his window, shining into bushes and along fences but shying away from porches and windows.

She walked casually away from the ditch with her hands in her pockets. The truck approached her slowly and she acted wary as the passenger called out to her. "Excuse me, miss. Have you seen a big ol' dog running around out here?"

"Not that we know of. Just a big son of a gun. Got a call from a lady worried it was gonna eat her cat. Be careful if you see it, all right?"

She nodded and waved as the truck continued on its journey. Once it was out of sight, Ari crossed the street and walked close to half a mile before she found an all-night diner. It was lit from within, like the rest of the street was a theatre and the interior of the diner was the stage. Ari stepped inside, into the warmth and quiet chatter.

There were two other customers present. A man with a beaten fedora was turned around in his booth to talk with a hunchbacked black man seated at the end of the bar. Both men turned their heads toward her as she came in, nodded their hellos, and went back to their conversation. A waitress started moving as soon as Ari came through the door and they reached the same spot at the same time. She placed a napkin in front of Ari and smiled. "What can I get for ya, hon?"

"I'd really like to use your phone, if I could. I need to call for a ride."

"Here." The hunchbacked black man stood up and moved close enough to offer his phone to her. "Betty don't like lettin' people use the house phone. You callin' someone to take you back home?"

"Good for you. Ain't no shame in goin' back to where you loved."

Ari realized they thought she was a runaway. She wasn't that young. She smiled and took the phone with her thanks.

Betty said, "I'll get you a glass of milk while you're waiting, hon."

She was going to protest and ask for coffee instead, but milk sounded very appetizing to her. She thanked Betty and dialed Dale Frye's number. It only rang once before it was answered.

"You're going to make me feel guilty."

Dale chuckled. "Where are you?"

She picked up the menu tucked between the ketchup bottle and the napkin dispenser. The diner's address was written at the bottom, and she read it over the phone. "Take your time. The folks here are pretty nice."

There was a neon clock hanging over the kitchen pass-through. "A little past four."