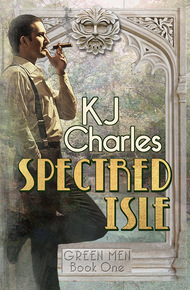 Archaeologist Saul Lazenby has been all but unemployable since his disgrace during the War. Now he scrapes a living working for a rich eccentric who believes in magic. Saul knows it's a lot of nonsense…except that he begins to find himself in increasingly strange and frightening situations. And at every turn he runs into the sardonic, mysterious Randolph Glyde.

Randolph is the last of an ancient line of arcanists, commanding deep secrets and extraordinary powers as he struggles to fulfil his family duties in a war-torn world. He knows there's something odd going on with the haunted-looking man who keeps turning up in all the wrong places. The only question for Randolph is whether Saul is victim or villain.

Saul hasn't trusted anyone in a long time. But as the supernatural threat grows, along with the desire between them, he'll need to believe in evasive, enraging, devastatingly attractive Randolph. Because he may be the only man who can save Saul's life—or his soul.

I've read many historical fantasies by KJ Charles, and love the way she handles magic and queerness around the turn of the 20th century. She balances historical accuracy and modern sensibility perfectly, and her recreation of Edwardian weird-tales magic is spot on. Spectred Isle is set in the shattered aftermath of WWI, when the secret magic used to win the war has begun to spread dangerously into the mundane world, and she captures the period beautifully. It's also tremendously well written — I defy you not to be terrified by one scene, and yet it's only a walk along a country road. – Melissa Scott

There was no sign of any sacred Druidic grove or whatever bee was in the Major's bonnet this time, but there was a truly magnificent oak dominating the landscape not far ahead. Saul took another step towards it, admiring the gnarled branches and the bright light green of its fresh new foliage, and it burst into flame.

The fire erupted so violently that Saul heard a faint whoomph of air, like an explosion, and his first, war-trained thought was, Mortar. He could see all around the heath, though, and there was no engine of war, no gun, no people, even, except for one man some way down the path who was running towards the tree with such urgency that Saul found himself jog-trotting, then sprinting, to meet him.

By the time Saul reached the tree, it was blazing so hard he couldn't go near it, waves of heat rolling out and stinging his eyes. The other man was standing, breathing rather less heavily than Saul, staring at the conflagration.

"What the devil happened?" he demanded aloud, in a decidedly upper-class tone.

Saul couldn't tell if the man was asking him or the empty air; he replied anyway. "I've no idea. I thought it was a mortar at first but—"

"We're not at bloody war any more."

"At first," Saul repeated. "That or lightning, but the sky's clear as you like. Did you see anything?"

Saul had no idea. "Someone with some kind of gasoline? That blaze is—"

"Unnatural," the man completed. He was regarding the tree with hard, sceptical eyes. Saul couldn't blame him. The tree had been a living thing; if you'd chopped it down the wood would have taken a good year to dry out for burning, but the fire was so fierce he felt it heating his cheeks, and so loud that they were almost shouting over the noise of branches cracking and snapping. How in God's name did a live tree burn like that?

"It must have been lightning," he said aloud. "I had a view of the whole park."

"And you saw a very small thunderstorm above?"

Saul had trained himself to endure contempt, but he didn't have to take sarcasm from a stranger. He turned away from the inferno and had his first good look at the other man.

He was of medium height, but thinnish and rangy, which made him appear taller: the sinew and whipcord build that Saul himself had, and liked. English from his features, with dark hair and much lighter hazel eyes under near-black, slanted brows. A saturnine, sardonic sort of face, clean-shaven; a mouth that seemed made to sneer. He looked like the kind of man Saul had met a great deal in the war in the officer ranks: a thoroughbred aristocrat, effortlessly superior, endlessly disdainful.

"See anything you like?" the man enquired, those finely shaped lips twisting, and Saul realised he'd been staring.

Well, sod you, fellow. "I can't say I do, no," he said affably, and wasn't sure if the flicker in the man's expression was amusement or affront.