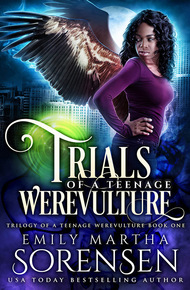 Lisette was expecting to be a werehawk. Now she's a werevulture.

Then the mysterious Rarity Clan invites her to join. They offer her friendship, and the ultimate secret: how to be turned a second time so that she could choose a different species instead. She could be a werehawk, or a vampire, specter, giant, lorelei, or whatever else she pleases. There's only one catch, and it's a big one.

The tool that's used to do that is a weapon that could destroy the entire city.

I still remember when, as a little kid, I got my hands on a book the folklore origins of movie monsters. One of the most fascinating parts of book was the chapter about the other were-creatures. Were-tigers, were-bears, etc. Thus, the idea of a werevulture was a winner for me. When I started reading the book and discovered that being a werevulture less of a curse than an inconvenience (she was expecting to be a were-creature, just one of the less carrion-eating variety), I knew I was in for a good story. – Joseph R. Lallo

Once Flyers' Ed was over, I ambled out of the school entrance, fiddling with my phone and planning to call my parents to pick me up just as soon as I finished reading about vila weight limits and the reason why so few of them were bodybuilders.

Then a chill ran down my neck, and I had the terrifying feeling someone was watching me.

I spun around, my heart hammering. Was I in danger? I was an enormous bird, but there were plenty of weres that were larger, and vampires were faster. If I could have flown away right then, I would have, but I still didn't know how, and after the nurse's warning this evening, I didn't dare try.

Stupid for leaving the school grounds alone at nearly nine at night, I told myself. Stupid, stupid, stupid.

I scanned the area with a paranoid eye. Were there any trees I didn't recognize that might be a kapre? Was there a werebird in one of those branches watching me?

If I had to run, I would run back to the school, which was only a five-minute walk away. I tensed my leg muscles.

And suddenly, Loretta Vampireclanjiangshi was standing in front of me.

I jumped back, startled. The woman who had baby-sat me and my sister last night was a vampire, and vampires were fast, but nobody was that fast. Certainly not a jiangshi.

A rakshasa? I thought. Illusion magic. Has to be.

"Hello," she said solemnly. "Your name is Lisette, right? I've been given permission to invite you into our clan."

"I'm part of a clan for misfits without one for their own species," she said. "I checked, and there is no werevulture clan anywhere near this area. Would you like to join ours?"

This had come completely out of nowhere, and I still had the prickling feeling I was in danger. "Uh . . . why would you be in such a clan?" I asked cautiously. "Jiangshis aren't rare."

I knew it! I thought furiously. I knew you weren't a jiangshi! You big, fat liar!

But that didn't explain what she actually was. Or why she had waited to invite me until she could corner me all alone. Or whether she would take no for an answer.

"What if I said no?" I asked cautiously.

She smiled. "You're worried because you don't know me."

"You'd better believe it," I shot back.

"Go home and talk with your parents," she said. Her arm moved, and I tensed, but she did nothing more than reach into the pink plastic purse dangling by her side and pull out a business card. She handed it to me. "It's not a secret organization," she said. "The phone number's on there. Our next meeting is in three days. Your parents can come, if you want them to."

I took the card warily. The card said Rarity Clan, which seemed as accurate a description as any for what she'd said.

"How can I trust you?" I blurted out. "You lied about your species. You said you were a jiangshi, and you're not!"

"I never said that," she said.

"You did so!" I said furiously.

"No," she said calmly, "I told your sister my name was Loretta Vampireclanjiangshi. It is. The clan I'm part of now is not an official one: it has no turning stone. I am still legally recognized as being part of my parents' jiangshi clan, which I joined when I was twelve years old. As such, whatever my species, I have right to claim the name."

I supposed she had a point, but there was absolutely no denying that she'd been deliberately misleading. If I'd chosen to stay in my parents' clan, I could technically have claimed the last name Wereclanhawk, but I would never have dreamed of lying to people that way. Whatever you were technically allowed to do, people expected your last name to declare your species.

"You know, we have a lot in common," she said into my silence.

"My turning went wrong, too," she said. "Just like yours. And I became a species that's very rare and has had no clan for centuries."

"What species?" I asked curiously.

She smiled. "If you want to know that, you'll have to come to the meeting. I don't usually show people unless they're friends. But suffice it to say, I am a vampire and I don't suck blood."

I gasped and blinked. A rakshasa! I thought. She's definitely a rakshasa! That was clearly an illusion, and they don't suck blood, they suck light!

Except that . . . there was a rakshasa clan in town. I knew for sure because Annette had griped about a classmate who liked to use illusion magic to play practical jokes on people.

My fist tightened around the business card. I didn't like feeling manipulated, and there was no doubt she'd been trying to draw me in.

Rarity Clan. I stuffed the card into my pocket, just in case.