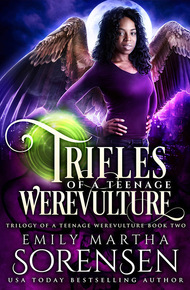 Kegan's family is going on vacation to New Yeti City, and Lisette's invited! She figures this'll be great fun. She'll get to shop, sightsee, and meet up with the only werevulture clan in the country.

But unfortunately, the werevulture clan isn't interested in Lisette, her opinions, or the "trifles" she raises as concerns.

Which is a shame, because a hundred baobhan siths are about to converge on the city.

Curating a bundle is a great job for an avid reader, but it isn't without its downsides. One of the biggest is, at least during the curation process, you tend not to have the time to actually continue a series that gets its claws into you. Lucky me that Trilogy of a Teenage Werevulture exists and offered up its next installment. It was loads of fun continuing the story of Lisette as she puts her shapeshifting powers to good work, even when others of her kind don't quite take her seriously. – Joseph R. Lallo

"Are you sure about this?" Kegan gulped, staring at the terrible weapon heading down towards my arm. "That's a gigantic needle."

"Don't try to talk me out of it," I said, gritting my teeth. "Somebody has to do it, and I'm the only person who can."

"And we thank you very much for it," the vampire nurse told me soothingly.

I flinched and tried not to look at the vial that was filling up with my blood. It was hard to tear my eyes away from the sight, but I wished that I could.

If this had just been a Red Cross donation, I wouldn't have done it. I'd done that once, and the needle had freaked me out. Never again, I'd decided, no matter how important it was to make sure draculas got enough to feed on during the full moon. Other people could do it just as well as I could, so I could leave it to them.

But this was even more important than that. This was something only I could do. And people's lives were at stake. How could I not give it to them?

"All done," the nurse said cheerfully, pulling out the needle. "Would you prefer vampire blood or band-aid?"

"Band-aid," I said immediately. Vampire blood tasted disgusting. Sure, it could heal almost any wound, but there was no way I was going to put myself through that for a little pinprick.

The nurse placed a cotton ball on my arm, strapped a band-aid around it, and helped me down from the chair. Actually, it was more like she lifted me straight off the chair and effortlessly plopped me down on the floor. Vampiric superstrength was really something.

Kegan must have been thinking the same thing, because as we left the room, she said, "Sometimes I envy draculas."

"Yeah, but they can only fly if they shift into bats," I said. "There's usually not enough blood to go around for them to do that casually."

In answer, I grinned and shifted into my half-form. Gigantic brown wings sprouted out of my back, spreading behind me.

"Do you mind?" a woman's voice said huffily from behind us. "You nearly got those things in my eye!"

I turned around to see a cyclops woman waiting by the elevator that we'd just walked past. "Oh. Sorry."

"I'll tell you what," Kegan whispered to me. "I don't envy cyclopes."

After my experience with Rarity Clan, not to mention becoming the only griffon werevulture in the country and quite possibly the world, I had a lot more sympathy for rare clans and people who chose to be weird things than I used to. Still, I didn't understand why anyone would choose to be a type of giant that had only one eye. And no magical ability, either. Cyclopes weren't even rare!

We stepped out of the building and unchained our bicycles from the bike rack. I would have liked to have flown, but I still only had a learner's permit, and Kegan couldn't fly at all.

"I dunno," I said. "I hope so. Otherwise I dealt with that gigantic needle for nothing."

"It should work," Kegan said confidently. "Vampire blood heals people, right? And they said buzzard blood can make other people immune to taint."

"Only other werebirds," I said. "Closely related ones, too."

"Well, neither can I," I said, rolling my bike out of the bike rack. "I can only fix turning stones."

"That counts!" she insisted.

I shook my head. Honestly, I didn't have that much hope that it would work. Benedict Arnold had been tainted, and he hadn't come back from it. Since he'd presumably been full of werevulture blood, it didn't seem likely that my blood would be able to cure anybody.

Still, you didn't just not try something because you thought it wouldn't work. If it might save somebody, you had to try everything, even if it meant facing gigantic needles.

"Wanna go to Mina Harker?" Kegan asked hopefully. That was her favorite shop at the mall. They sold Gothic, spooky clothes in fashions aimed at vampires that Kegan liked to wear even though she was a banshee.

I shook my head, glad of the excuse. "Can't. I've got to untaint turning stones at the police station today."

Kegan groaned. "Seriously, it's been two months. How many are out there?"

Rodrigo had made his way all across the country "helping" mermaids and infecting their turning stones, and most of the clans had not, as it turned out, turned them in to the police to be destroyed like they were supposed to. Some of them had even tainted their turning stones on purpose and secretly paid other aswangs to help their children all turn properly the first time.

"There are probably a lot of mermaid clans out there with tainted turning stones who won't admit it," I had been told. "It's hard to blame them, since they have the option to control their children's turnings and not risk the turnings failing. There's even a push to legalize taint in three cities, now that the secret of what aswangs can do is out."

I had mixed feelings about that. First of all — no more mermaid children ending up in orphanages because they couldn't breathe underwater sure seemed like a good thing. Yay!

But on the other hand, the thought of a wide network of pink turning stones everywhere seemed incredibly dangerous. There was no cure for taint, and if you touched a pink turning stone without an aswang controlling it, you'd go crazy and die.

Okay, so you could just have aswangs control all the turnings. Except then no one would be able to use their own turning stones without an aswang helping them. Which seemed sorta like . . . blackmail? Extortion?

Either way, I hadn't forgotten what Rodrigo had said about having a boss, and neither had the police. Every time I went over to the police station to untaint more stones people had sent in through the armored car, it was all they could talk about there.

Who was Rodrigo's boss? What was he really after? Was he making a play to control the entire country behind the scenes?

If it turned out that my vulture blood could heal people who were tainted, that would make it way more likely that tainted turning stones would end up legal in some places. But it also meant that if it was going to happen anyway, it would be way less dangerous.

All things considered, I didn't want taint to be legalized. The thought of some shadowy aswangs with unknown plans that were probably not best for everyone else controlling the country made me shudder. But I had to hope my blood would work, even if it might lead to that future.

"You know what you need?" Kegan said. "You need more vultures. Then you wouldn't have to do all the untainting, and you wouldn't be the only person donating blood, either."

"You said it," I agreed. After months of waiting, the paperwork had finally gone through to give me permanent possession of the turning stone, which meant I could start using it to turn humans into people. Since I was sick of not having a clan, I couldn't wait.

"When are you going to start?" Kegan asked.

"I dunno," I shrugged. "I posted on Wereconnection yesterday. I haven't gotten any messages yet."

"You'll get some," Kegan said. "Werevultures are awesome. Everybody's going to want to be one."

While I was thinking about it, I sent quick texts to two of my cousins who were fifteen and sixteen. They were planning to be werehawks when they got turned, so this wouldn't be all that different, right?

Then Kegan and I got on our bikes and rode together until we got to the point where we had to go opposite ways.