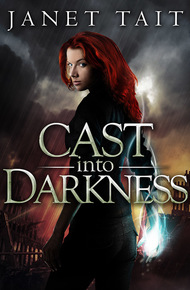 Janet Tait has loved writing for as long as she can remember but tried IT administration, web development, market research, and product management before surrendering to her inevitable destiny. She lives in San Diego, California with her loyal canine companion and, in her spare time, enjoys haunting the halls of comic and science fiction convention, playing table-top and RPG games with her friends, and binge-watching British TV shows on Netflix.

Cast into Darkness by Janet Tait

An ancient, deadly magic is rising, and she's the only one who can harness it…

Kate Hamilton hates being treated like an outcast. Born a powerless Null to America's pre-eminent magical family, she escapes to a distant college and the life of a theater major. The last thing she wants is to be dragged into her family's war for global domination against the rival Makris clan. But when an innocent favor pulls Kate into a perilous contest with a legendary magical stone, she plunges into their dangerous world of spellcasting and scheming. A world Kate's sexy, devious boyfriend Kris is all too familiar with…

Hardened magical operative Kristof "Kris" Makris chafes under the rule of his lunatic father, but he's found the perfect way to overthrow his leader and save his people. But the artifact he needs is in the hands of the Hamilton family, and each attempt to steal it from Kate brings him closer to blowing his cover. If he does, he'll do more than alert his father to his treachery. He'll lose Kate. And that possibility bothers him more than he cares to admit.

As the ancient power inside the stone begins to transform Kate into a vessel of world-destroying magic, the line between friends and enemies blurs. Kristof must choose between his family and the girl he's grown to love. And Kate must either trust the man she thought she knew or lose herself to the stone's deadly embrace.

Many of the stories I found for this bundle revealed unexpected corners of the genre. Cast into Darkness gave me precisely what I was hoping to find. A world steeped in magic and intrigue. World-threatening mystic gambits. A clash of rival clans. This book delivers on the core of what the genre promises. So good. – Joseph R. Lallo

A blaze of iridescent light, brief as a camera flash, lit the darkness outside Cornell's Kiplinger Theatre green room.

Kate Hamilton bit her lip. "Great. That's the last thing I need." She made for the sliding glass door, hustling in her heavy muslin skirts past a pair of fellow students stumbling over lines they'd had down pat last night. Performance nerves. Not that she was immune. But the play wasn't what made her heart thump so hard in her corseted chest.

She slid the door open and peered into the shadowy expanse of elm trees lining the building. No students hurrying home after a late-night study session. No cars rushing by on College Avenue. Nothing but the distant gurgle of Cascadilla Creek and chirp of a few crickets.

Maybe the flash was nothing. Still, as much as she'd like her family to show up for one of her plays, using an uncloaked teleport spell and letting its oh-so-conspicuous burst of light be seen by Normals violated the Rules of the Game.

And if the caster teleporting here wasn't someone in her family, then the Rules weren't the only things likely to be broken.

She should call her security team—report the incident and let them deal with the hassle. But following protocol would get her pulled from tonight's show faster than she could say "Dad has control issues."

Oh, screw it. Kate walked outside, the heat sticking her dress to her skin the moment she passed from the air-conditioning into the warm May night. She followed the line of the building toward where she'd seen the flash, her ivy-covered path barely illuminated by the faint light of an overhead safety bulb. Despite the warm night air, goose bumps rose on her arms. The cool scent of pine wafting over from the forested gorge a dozen feet away did nothing to calm her nerves.

A pale blur reached out of the blackness. A hand yanked her against the wall, scraping her arm hard across the stucco.

"Ow. Dammit." That stung. She gazed up into her twin brother's agitated eyes. "Brian—"

"It is you. Good." His red hair, darker in the moonlight, fell in wild waves over his sweaty forehead. A large bruise colored one cheek. Something—blood?—splattered his white oxford shirt, hanging half tucked into designer jeans. And his eyes, while as blue as hers, shone with secrets she couldn't begin to fathom.

"Where did my buttoned-down, debate-team-leading, straight-A Harvard student brother go? And when did he get replaced by a refugee from a B-grade action movie?"

"Keep it down," Brian said. "They'll hear us. I thought I'd lost them a few jumps back, in Nairobi, but…"

He let her go. She rubbed her arm and squinted up at him. The little quiver at the corner of his lips, the way his hand rapped against his thigh—it was clearly twitchiness from casting too many spells. Paranoia might be the price of channeling magic through the human mind, but it was a bitch to sort out the truth from a caster's delusions.

"Is someone chasing you, or are you just spell-tweaked?"

Brian glanced over his shoulder, toward the tree-covered wilderness of Cascadilla Gorge. Then he turned back, and the frantic look in his eyes eased. "Not sure."

She brushed his face. The bruise looked new. "Who were you fighting? The Makrises?" Maybe it was another battle in the centuries-long Game between her family and their rivals—both clans of magical casters who fought a shadow war to control the world's powerful elite from behind the scenes.

He winced at her touch. "No time to explain. I need you to do something for me." Reaching into his pocket, he pulled out a ball of red silk wrapped around something small. "Keep this safe."

She swallowed the tight lump in her throat. "What is it? Something you got on a mission?"

He hesitated. "It's an artifact. Old. Powerful. Can't let another family get it."

"And you're giving it to me? I'm not part of your little Game."

"No one will suspect you. Don't say anything to Dad or anyone else."

"You can't go all secret agent on me and expect me not to talk."

She took a step back. "No. I have a life here. Friends. I'm not going to let you and all this magic crap screw it up." Again.

"Kate, please. I don't have anyone else." He glanced at the trees behind him, then back at his sister. "Will you?"

"They'll be chasing me, not looking for you. You're off-limits."

The only advantage of being a Null. "You'd better be right." She held out her hand.

Brian set the silk bundle on her palm. The covering slid off its top, revealing the artifact underneath. The round white stone lay nestled in its bed of crimson. It glowed with a hint of green and thrummed in time with her racing pulse.

I shouldn't be able to feel it. Not through the fabric.

Holding the stone brought back childhood memories: tracing spell charts in her uncle's study, touching a jeweled talisman singing with power, clutching her mom's arm as she whisked them both away to Rome, London, or Miami faster than the beat of a hummingbird's wing.

Being tested for magical aptitude…and failing.

Shit. Getting involved with magic again is a bad, bad idea. She made to shove the glowing thing back at him, then saw the desperation in his eyes. Brian's the only one who's ever been there for me. She sighed and stuffed the silk-wrapped parcel in her pocket.

"Make sure not to—" Brian said.

"Touch it? I remember the Rules." Sort of. Don't let the Normals see you do magic—like that applied to her—and don't involve noncombatants in the Game. Oh, and don't handle magical artifacts with your bare hands.

"I'm not certain how this thing works yet. Just be extra careful." Brian gave the scrape on her arm a gentle touch. "Sorry. Let me fix it for you."

"Don't bother. You're twitchy enough. No point making you worse."

"Healing you isn't going to make a difference." Eyelids fluttering, he traced a spiral on her skin with his fingers. He chanted quiet, guttural sounds. The abrasion disappeared, and along with it, the pain.

She shot him a wry smile. "Thanks. 'Course it wouldn't need fixing if you hadn't gotten all spell-tweaked in the first place."

He shrugged. "Hazard of the job."

He'd kept his promise to come to the show tonight after all, but her stomach did a flip-flop at the realization that he was only yards away. He couldn't find Brian here, beaten up and hiding in the trees, with no car, no explanations. Kris Stevens was a Normal. He didn't know casters even existed, much less that his girlfriend belonged to a family full of them. And Brian—along with the rest of her kin—had no idea she was dating a Normal.

Kate gave Brian's arm a squeeze. "I've got to get back. The play's about to start. You need to go before someone sees you. You're breaking too many Rules as it is."

Brian kissed Kate on the cheek and glanced around. "Love you." He chanted a few quiet words and traced a rapid pattern against his thigh.

"Don't forget to cloak your—"

He vanished, and the light from his passage flashed across the sky like a beacon.