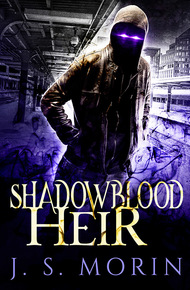 Aspiring author Matt Lee delivers pizza by day to scrape together the pittance he contributes for the Cambridge apartment he shares with best friend Judy and her boyfriend.

During the season finale of their favorite show, the three learn that the best-selling author of the books has been murdered in a manner remarkably similar to the episode's prophesy. Unfortunately for Matt, the author is Patricia Martinez—the professor responsible for expelling him from Harvard when his Shadowblood fan fiction was just a little too good.

Now the prime suspect in her murder, Matt worries even his friends think he might just be crazy enough to be guilty.

His only hope: listen to the voices.

Because if he can prove that Patricia Martinez was writing fact instead of fiction, and that the Shadow realm killed her before she could close the seal she opened, he might just be able to save the world.

But can he trust Judy to help set things right, and resist the first taste of real power he's ever had? Or will he break away from his best friend and give in to the Shadows?

The blending of fact and fiction is one of the things that can make Urban Fantasy particularly compelling. This is a world we know, with things we encounter every day. If those things are real, is it really such a stretch to believe these supernatural elements might be real as well? Shadowblood Heir is a book that beautifully exploits the concept of facts seeming awfully fictional and fiction seeming awfully factual. – Joseph R. Lallo

There had to be a way out. There was no closet, no side door linking adjacent offices. A swirl of shadow mesmerized me, despite the dire circumstances—or possibly because of them. A tendril stretched out, just a dark blot against the invading streetlight, and pointed to the window.

I hated heights. Get me two or three flights up an open stairwell and I'd shy from the railing. The idea of crashing through a window action hero style just wasn't happening. As if sensing my trepidation, the shadowy tendril became more specific. It pointed to the mid-point of the window, where a latch separated the double-hung panes. I yanked the cord of the blinds and unlatched the window. Fortunately, the windows at the Barker Center were massive. I could have crouched upright beneath the open pane. A wave of vertigo hit me as I looked down.

The shadow snaked past me and pointed down. I looked again, and the more rational part of my brain estimated the drop at ten or twelve feet, and there were some small, decorative shrubs to break my fall. I heard the footsteps returning in the hall.

My heart froze. That wasn't a campus police car parked not five spaces from Tim's. That was a Boston PD cruiser. My prospects for getting out of this without handcuffs were plummeting. But plummeting was exactly what I didn't want to be doing. Visions of cracking my skull or breaking an ankle consumed my thoughts.

I'd managed to push aside thoughts of my haunting companion. The sudden return of the voice put a chill through me that nearly made me fall from the open window.

"It's ten feet. Can't be worse than the city dungeon."

More like twelve feet, maybe fifteen. Might as well have been a hundred, because my hands weren't releasing their grip on the ledge. Sad to say, but my split personality was the rational one right then.

A key slid into the lock of the office door.

"This doesn't satisfy our deal. She hid something, and you failed to find it. Taking the coward's way won't—"

"I got him," a voice from the street called out. "You there. Stay right where you are."

A cop with a gun shined a flashlight that blinded me. I almost lost my grip and gave the whisper just what it was goading me into.

The office door burst open, and a second flashlight pinned me with no place to look.

Within seconds, I was dragged bodily back into the office.

Within minutes, I was handcuffed and riding in the back of a police cruiser.

A whispered sigh tickled the edge of my hearing. "You should have listened."