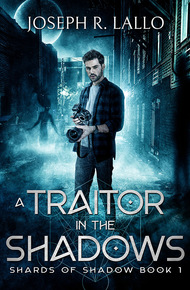 A Traitor in the Shadows by Joseph R. Lallo

How could a good photo-op go so wrong?

A perfect time-lapse of the lunar eclipse should have earned Alan some cash and acclaim. Instead, he came home with an invader in his dreams and a terrible feeling of being watched. Now his life is a tangle of cults, mysterious white-suited visitors, and scheming shadows.

Surviving the next few days will take teamwork, guile, and an awful lot of coffee.

A Traitor in the Shadows is the first in a new Urban Fantasy series by Joseph R. Lallo, author of the international bestselling Book of Deacon and Free-Wrench series.

For a number of years I've been working on a growing list of short stories. Some are continuations or spin-offs of my main series. Others are quick little experiments. When I wrote a story about a shadowy interloper coming to our world and finding it far different than she expected, the concept seemed deep enough to warrant further investigation. A Traitor in the Shadows is the first of at least three stories to spring to life from that simple short. – Joseph R. Lallo

Alan plugged his phone into a portable power brick and yawned. He hadn't done much more than drive for most of the day, but he was exhausted. When he got overtired, it caused him all sorts of problems. His hands got shaky—a real problem for a photographer. He couldn't sit still. It was like he'd never shaken the "get cranky and fussy when you're overtired" reflex from infancy. Considering there was a long way to go before the time-lapse experiment was done, and he'd prefer to be sharp for the crucial bit in the middle, he decided it was best to take a nap now. He set an alarm for five minutes before totality, zipped up the tent flap, and slid into his sleeping bag for a snooze.

He blinked his eyes and glanced around, disoriented. Things around him looked familiar, but he couldn't shake the feeling that they shouldn't. This wasn't a place he should have ever returned to, but here he was. A worn desktop lay before him, its veneer carved by the surgically sharp point of a grade-school compass of a dozen generations of students. The walls were covered with vaguely educational posters providing lessons in simple math and grammar. Rows of desks ran along either side of him, populated by faces he couldn't quite place.

This was school, he knew that much. But it didn't seem right. It felt like it was a seventh-grade classroom at the most. But the people sitting around him in their little individual desks felt more like high school or college types. His dream-addled mind grappled with the faulty logic in the way most sleeping brains did—by completely embracing it as the unquestioned reality of the moment.

"… Now, as you all know, I consider the take-home assignments to be of equal, if not greater, importance to anything you might be graded upon in class," the teacher announced from the front of the room.

His heart dropped at the sound of the voice. Not him. Not him. It was Dr. Pendergrass. It was fair to say that most students had moments when they thought the teacher had a grudge against them, but Alan was absolutely convinced that Dr. Pendergrass's one goal in life was to fail him. He never bothered trying to figure out why. For someone as easily cowed by authority as Alan, teachers were like forces of nature. He wouldn't ask why the storm chose to strike him with lightning, and he wouldn't ask why Dr. Pendergrass always managed to find a way to call on him for the hardest question in a given assignment. Luckily, there hadn't been any homework the night before.

"I want you all to take out last night's assignment," Dr. Pendergrass said.

A bolt of burning anxiety ripped through him. All around him, the other students were dutifully slipping composition pads from their bags and flipping them open. He numbly pulled his drawstring backpack to his lap to try to find his own book. The pack felt far too light to contain the texts for this class. As he tried to open the bag, he found his fingers were too clumsy to undo the slipknot.

"No, no, no," he muttered, watching the wave of students answering their questions work its way up and down the rows beside him.

The more anxious he got, the more he fumbled with the slipknot. Why couldn't he get his hands to work?

Mounting frustration mixed with the sting of the inevitable discovery that he'd not done his homework was a potent and debilitating cocktail. Gradually, though, he found that there was something else going on around him.

He took his attention off the bag and looked around. The walls seemed… wrong. Even more wrong than they had been a moment ago. They were wavering, hazy. Less real than they were before. And it was darker than it should have been. Not like the sun had been setting or the lights had been dimmed, but like darkness had somehow seeped through the walls like a fog. It felt cold. His skin tingled. His brain felt itchy, like little prickly claws were poking and tugging at it. If he could have crawled out of his own skin to get away from the terrible bone-deep unease, he would have.

A long shadow spread across the room, seeming to cast itself through the wall. He had a hard time making out the details as it projected across the students' desks, but it seemed to have a forked, split shape. Something distant in his mind recognized it as the tree he'd hiked to find. He turned to the source of the shadow and was treated to a fleeting glimpse of the tree itself, but like the rest of the room, it was wrong. What he knew to be a craggy gray trunk against a starry black sky was quite the opposite. The sky was almost painful to look upon, a photo-negative of the night he remembered.

He shook. Icy fingers felt like they were tightening around his heart. A horrid sensation spread through him, a scoring, tearing feeling that left him feeling hollowed out. Alan shivered and gripped his bag tight until the feeling faded. It didn't vanish. If it was the chill of a cold winter night, what he felt now was the warmth of a blanket thrown over him. It wasn't enough to erase what he'd felt, but it reminded him of what it felt like before…

The classroom snapped instantly back to normal, and though the residue of the sensation lingered, he turned to the teacher like a deer caught in headlights.

He fought his bag open and pulled out the notebook. "I… uh…" He cleared his throat. "Could you repeat the question?"

"It is question six from the homework assignment."

His chest felt like there was a lump of hot lead sitting on it. Tears were forming in his eyes. Page after page of his notebook was completely blank.

"You are aware that this assignment is worth twenty percent of your grade," the professor rumbled.

"I must have… I don't remember you assigning it…"

He flinched as a piece of paper executed an odd, unnatural loop into his vision and flopped onto the desk in front of him. He stared in confusion at the slip of paper, which didn't look like the white page with blue lines that had defined the bulk of his educational career. It felt rough. The color was oddly textured, like it had been shaded with a charcoal pencil.

The teacher's impatience boiled as he flipped open the page. A curious bit of penmanship traced out an even more curious message.

"Mr. Fontaine?" the teacher said impatiently. "Either answer the question, or you get a zero for the assignment!"

"Th-the answer is. Uh… Two sprigs of onyx leaf combined with twice-boiled brine of the ashen sea, simmered with the bones of three hearty joints of beast for a night and a day."

He looked to the teacher, fully prepared for a gale-force scolding. Perhaps there would be a peppering of chortles from the rest of the class.

"That is correct," the teacher said. His disappointment at missing the chance to reprimand Alan was palpable.

Alan cocked his head and looked around, anticipating some sort of prank. "That's correct?"

"But this is Linear Algebra class."

"And you have answered the question properly."

The teacher moved on, leaving Alan to slump into his seat and enjoy the most magnificent wave of relief in recent memory as it swept over him. After a few moments, though, he found himself considering the paper. He knew he hadn't written the message. Someone had passed it to him. He turned and looked for a likely candidate. One person instantly stood out from the rest.

She was distinctive looking, to put it lightly. Her skin was pale, and her features oddly defined. The lines of her face shuddered and moved about like the sketch lines of a quickly cobbled-together animation. Her hair was long and black and fluttered in a breeze that didn't seem to affect anyone or anything around her. She had a satisfied grin on her face and a pile of the same rough pages on her desk.

"Excuse me. Were you the one who gave me the answer?" he whispered to her.

The woman's large eyes darted up to meet his, and for a moment she looked as petrified as he'd been under the teacher's gaze.

"What? No! Why would you think that?"

He pointed. "You've got a stack of the fancy paper there. And a fancy pen."

She glanced back and forth between her desk and his finger. "No I don't!" She swept her hand across her desk. The pages fluttered up into the air, and then they were gone. They spread like smoke or blown dust and simply dissipated.

Alan blinked and waved off the fumes, but like so many other inexplicable things in the last few minutes, the oddness rolled off him. "Well, thanks for the help." He held out his hand to her for a shake. "I'm Alan. And you are?"

His mysterious helper leaned away from his hand as though it was threatening to bite her.

Alan snorted and opened his eyes. As one does after a strange dream, he took a few moments to acclimate to the real world again, then slowly slid upright and wiped the sleep from his eyes.

"Oof. That was a weird one," he said, the scattered images of his unusual dream sliding into the shadows of his mind.