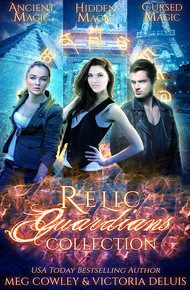 Meg lives in Yorkshire, England with her husband, son, and two cats Jet and Pixie. She loves everything magic and dragons. At school, if Meg wasn't reading a book under the desk, she was getting told off for drawing in all her classwork books.

Now, she spends most of her days writing or illustrating in her studio, whilst serenaded by snoring cats. Visit www.megcowley.com to find out more, discover Meg's books, and join her reader group newsletter.

Victoria is a short story author and novelist, who loves reading - everything - and writing urban fantasy, supernatural romantic suspense, cosy mysteries, and the occasional sci-fi.

She was born and raised in South Wales, where she still lives with her husband, daughter, three overlord cats and a doting dog. This offers her a rich heritage and mythology to use in her stories.

Visit www.victoriadeluis.com to find out more about Victoria and her writing.

Zoe Stark thinks Hayley Bevan is the last person she'd ever be able to work with. Tough luck. Life throws them together to save the world, whether they like it or not.

No-nonsense Zoe is a Magicai and relic hunter in an underground world of magic and danger. Reserved Hayley catalogues archaeological finds, safe in her museum. When their shared passion leads their paths to cross, neither can imagine the adventures they will undertake together - nor the lengths they will go to keep each other safe.

A mission to save the world from a coming apocalypse at the hands of a madman and an ancient cursed skull sees Zoe discover a dark network of magical extremists, but who or what is the shadow that leads them? A call from the British Archaeological Museum sets her on a whole new adventure...

Hayley's trip to New York to catalogue the discoveries from an ancient Buddhist temple brings her more than she bargained for with the discovery of a weapon that can destroy not just her own world... but all of them.

Both their lives are about to change. Neither Zoe nor Hayley know who to trust. They face danger at every turn, but giving up would mean condemning billions to death. Sometimes, you find help and friendship in the most unlikely of places… Sometimes, the fate of the world depends on it.

Urban Fantasy lends itself uniquely well to the serial format. The vivid, thrilling adventures bring to mind the same "Will they make it? Join us next time to find out!" sort of fiction and cinema that inspired the likes of Indiana Jones. This is a collection of the first three stories in the Relic Guardians, which is a healthy dose of kick-ass adventure that'll leave you hungry for another serving. – Joseph R. Lallo

The phone was an explosion of sound that shocked me from sleep. It took a few seconds for the adrenaline rush to pass, and my confused brain to process where I was. The phone flashed next to me, its screen brightly lit, still ringing incessantly. The time on the face read the small hours of the morning, and the name flashed up: 'Director'. I groaned. No choice. I answered.

"Duncan, c'mon," I moaned at him, about to complain about personal boundaries, but he cut me off.

"Zoe, there's no time. I need you here now." I stilled at the tone of his voice: low and urgent. "There's been an incident in Mexico, and it can't wait until Monday. Top secret classification. How soon can you be here?"

I was exhausted and annoyed, and part of me longed to sink back into my pit of a bed and shut the world out for another half a day, but I couldn't resist. Anything with the highest level classified status always piqued my interest; I knew it was Something Big, which usually meant very dangerous, highly cool, and extremely exciting.

"My office. See you soon." Duncan terminated the call and I scrambled into action. I dressed as fast as I could, repacked my travel bag — swapping out my dirty clothes for clean ones — and left.

I arrived one minute early. Duncan awaited me, still in his work attire, but wearing slippers. He coloured slightly at my raised eyebrow.

"How familiar are you with Mayan lore?" He didn't reply with a joke, and I realised how serious it was.

"The ruins of a Mayan city were discovered two months ago in the Yucatan peninsula, close to Chichén Itzá, one of the centres of Mayan civilisation. It's been kept top secret for obvious reasons; looting of Mayan ruins is rampant. Well, the looters found it anyway. They've taken everything they could carry, including a magical artefact of potential significant power, and danger. Of course, the Mexicans want to recover the lot, but your focus is that relic. The head of their organisation has asked for my best operative on the case at once."

"A myth that didn't exist… until it was found." Duncan's expression darkened. "The Kukulkan Skull. It is said to be the skull of the feathered serpent god Kukulkan himself, bestowed with the power of life and death. It's most powerful on the Day of the Dead, November the second, and in the hands of the wrong Magicai could be used to cause devastation, dealing death to the living and giving life to the dead on a grand scale."

"A zombie uprising?" I gawked. That was a new one, or at least one I hadn't heard in a while. Few relics were so powerful. And if it were most powerful on the Day of the Dead… we were into October now. I didn't have long, it would seem.

Duncan frowned at my crude description. "Yes, well, I wouldn't put it like that. The thefts occurred only a few hours ago. I'm to get you out there as fast as I can, and your Mexican counterpart will fill you in on the rest."

He passed me a pile of papers on his counter. "You fly in four hours. Here are your tickets, itinerary, and the information sent over from the Mexican Secretary of Culture's office."

I flicked through the packet briefly. Lots of 'Top Secret' stamps. Itinerary. Economy plane tickets. I suppressed a sigh. You'd think with all the frequent flyer miles I racked up, they'd upgrade me to First every so often, but apparently not. Twelve more hours in 'cattle class' it was, then.

"You'd best leave now." He gave me a warning glance.