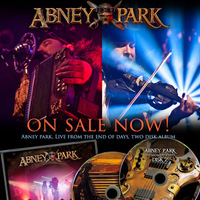 Abney Park comes from an era that never was, but one that we wish had been. An era where airships waged war in the skies, and corsets and cummerbunds were proper adventuring attire. They've picked up their bad musical habits, scoundrelous musicians, and anachronistically hybridized instruments from dozens of locations and eras that they have visited in their travels and thrown them into one riotous dervish of a performance. Expect clockwork guitars, belly dancers, flintlock bassists, Middle Eastern percussion, violent violin, and Tesla powered keyboards blazing in a post- apocalyptic, swashbuckling, steampunk musical mayhem.

Live From the End of Days Part 1 by Abney Park

This is part one of a two-part double CD, 27 songs recorded live at Columbia City Theater!

Part One:
1. Intro to The End of Days
2. Building Steam
3. End of Days
4. Neobedouin
5. Sleep Isabella
6. The Story That Never Starts
7. Throw Them Overboard
8. Until the Day You Die
9. Crowd banter: But That is Not This Day
10. The Circus at the End of the World
11. Blowing Off Steam
12. The Anthropophagists' Club
13. Victorian Vigilante

Our live songs are not the same as they are on the studio albums. There is more energy, more excitement, more intensity. In many cases, we've been performing the songs for years, and every year we add something: a new Violin line, and new guitar solo, and full horn sections, more Kristina, etc. Dueling solos between guitar, trumpet, violin, and trombone! new instruments never recorded, like silent Bouzouki, Darbuka, banjolele and turkish accordion. The intensity and power and charm of these songs are magnified by our live performances!

The venue were this was recorded is actually a famous recording studio where all kinds of legends of Seattle have recorded albums. Spin magazine called it the best sounding room in Seattle! They have a stage, sure, but they also have a full recording studio behind the audience. We recorded this to 24 tracks of pristine audio that can be mixed, mastered and processed and polished to perfection, without loosing the energy of a live concert.

This is without a doubt the album I enjoy the most of all our albums. Listening to it transports you to another place and time, to a party at the end of days. And the songs are the best of 15 years of Abney Park song writing, the best songs from all the albums we've released. This is something not to be missed.