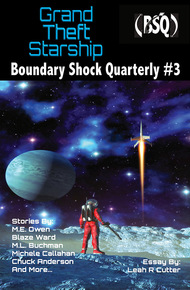 The future is not always a bright and shining beacon on a hill somewhere. Crime will follow us into space and the future. What will you steal, with the whole galaxy to pick from?

Seven syndicate authors let their criminal side out for a joyride on a dark night.

This is Boundary Shock Quarterly, Issue 003: Grand Theft Starship. Welcome to another exciting issue. Be sure to check out the other issues!

Boundary Shock Quarterly has themed issues designed to entertain and make you think. I had the choice of three different BSQ volumes and chose this one primarily because of the title. I love reading about crime in space, as you can probably tell, and this volume features some of my favorite writers. – Kristine Kathryn Rusch

Essay: What Does Grand Theft Starship Mean to Me?

I have always been fascinated by mystery and crime. I remember watching Perry Mason re-runs in black and white. I graduated to Law & Order and CSI and all those types of shows. I read a lot of Agatha Christi growing up, switching to Dashell Hammit and Raymond Chandler, and today, Robert Galbreth.

A lot of the great myths revolve around theft as well. At the heart of it, the Ramayana is all about Rama getting his stolen bride back. Let's not even talk about Helen of Troy.

I've written a lot of mystery and crime. The first couple of stories in my Rabbit series (historic mystery, set in Tang dynasty China) were originally published in Alfred Hitchcock Mystery Magazine. I've also written a few crime stories involving the Chinese Tongs on the west coast around 1880. I have a ghost detective as well, with those stories collected together as The Shredded Veil Mysteries.

Which was why Blaze decided that it might be appropriate for me to write the essay for this issue of Boundary Shock Quarterly.

What does Grand Theft Starship mean to me?

First of all, it doesn't necessarily mean theft of starships. While that might be an interesting theme, and I'm sure the writers of BSQ could do it justice, that's too narrow.

Instead, we came upon the distinction of theft on starships. That opens up whole new worlds of potential crime.

In addition, I really liked the play on words, and how tightly this theme nails genre: It's science fiction/crime. You know what you're getting when you open the book.

Personally, I've always been fascinated with family. Theft on starships doesn't have to be an individual, it could involve a crime family—think Mafia or Tong. (I've actually already written a couple of stories about the Chinese Tong in space—one is Dragon's Son, and the sequel to that will appear in Fiction River: Stolen, an anthology that I edited that will come out in summer 2019.)

Crime families mean generations of various types of crime, from stealing data to IDs to governments and yes, even spaceships. It's a large, grand space to play in.

However, theft doesn't always have to be big. It could be as small as stealing a fresh, steaming-hot roll from the rich man's restaurant when all you usually get is reconstituted goo. Or perhaps someone takes the data card that contains the last few records of your dead sister.

The petty crimes can be the most poignant and heart-breaking. Imagine the theft of a teddy bear robot to a three-year old, particularly one who considers the bear to be her only friend.

Theft isn't always so personal. But a good theft story is always personalized. Maybe it's a master thief on assignment who doesn't want to break her "stealing" streak. Or a military operation where there's always the danger of someone being left behind.

Just the taking of something isn't always the story. There's the planning that may or may not go into it: is it a crime of opportunity, or the result of years of careful research? What happens when the plan goes wrong, or even when it goes right? The crime may be an intellectual game played between two grand masters with the detective one step behind the mastermind AI, or it could be conducted in the heat of passionate vengeance by a cyborg who's been wronged.

One of the things that I learned a lot time ago is that crime stories are all about moving from chaos into order. Depending on the story, there might be horrible events occurring that need to be stopped, such as all the people in a space station dying from a mysterious plague, or it could be as light as the wrong color keeps being added to the re-constituted sludge that most people drink (and the neon-green is decidedly unappetizing).

I've theorized that the theme of bringing order to the world is one of the reasons why crime/mystery/thrillers are so very popular right now. People read the news and feel as though the entire world is spinning out of control. By reading fiction where there's a similar sense of chaos, but it's brought back under order, gives them a sense of relief.

Justice has been served.

One of the other things that I love about crime stories is that the crime doesn't have to be solved. The cyber-cops may never find the AI dragon living in network and stealing all the bitcoins. However, the crime must be resolved for the story to be a satisfying ending in this genre. So perhaps merely the introduction of cyber-knights is enough to bring the story to a satisfying close.

But that brings me back to the original premise: theft and moving from chaos into order.

At their heart, stories about theft are stories about hope. (I'm not talking about noir, which is a whole different kettle of fish.) There can be order. There can be justice. We can move beyond the chaos of our lives and get some satisfactory resolution.

That's truly what Grand Theft Starship means to me.

And hopefully you've been entertained along the way.