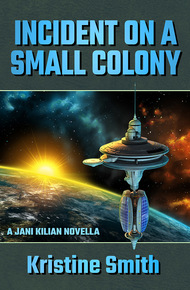 Incident on a Small Colony by Kristine Smith

I had always wanted to write a Jani story that was more of a straightforward adventure, with less emphasis on espionage, politics, and the sociological skirmishes between human beings and the alien idomeni. The Jani in Incident is solely focused on the day-to-day challenges of surviving and of avoiding capture by the Commonwealth Service. She has just landed a job as a documents technician for a small shipping company. A little downtime is all she's looking for, a chance to earn a few badly-needed dollars, and catch her breath. Yet even though she fears discovery and is reluctant to get involved in a troubling situation, she's unable to ignore a cry for help.

Kristine Smith's science fiction universes have won her fans and awards. While some readers praise her technical expertise, her characters always bring me back to her work. If this is your first exposure to Jani Kilian, it probably won't be your last. There's an entire novel series to explore. – Kristine Kathryn Rusch

Jani walked to the nearest sink and activated the tap. Savored the spill of warm water over her hands. Activated the soap, lathered, and rinsed. Counted to three, then looked in the mirror.

Her eyes stared back. Green nearly as dark as Delmen's brown, green unto black, the color of the bottom of a well.

She bent closer and examined the shiny white sclera. Still white. No gaps. No splits. Not much of anything, really. No blood vessels. No shadows. Fake white, to match the fake green. Eyes from a bottle. She reached into her pocket, held her breath as she felt for the vial of filmformer, exhaled slowly as her hand closed over it. Her shield. Her security. The one thing that allowed her to maintain a pretense of humanity.

The girl stood in the entry. Ten years old. Maybe twelve. Short and delicate, pale blond hair and blue eyes heightening the impression of extreme youth, as did her baggy black trousers and blue pullover.

Like she just emerged from her mother's closet. But something wasn't right. Eyes. There's something wrong with her eyes. A little too bright and opened a little too wide.

Jani could see that the girl watched her. But what does she see? Nothing in this world, if previous experience held. "Are you looking for someone?" A parent, she hoped. A guardian. Somebody responsible. "Are you lost?" She pitched her voice low, and spoke slowly.

"What's your name?" The girl cocked her head as through distracted by a distant sound. "Everyone has one."

"Ja—" Jani stopped the sound just before it emerged. "Andree Timas." She edged away from the sink, taking care to keep both hands open and visible. "I work here."

Jani fought the urge to pull back, and managed to remain still as the girl squeezed her hand, then shook it, two hard pumps that rattled up her arm. Is she trying to hurt me? Jani couldn't tell. She could detect pressure with her left arm and hand, but not pain. Same with her left leg. My old war wounds. They complicated her life at the damnedest times.

"I'm Annalise Couvier." The girl smiled, teeth dead white in the harsh lighting. Then she dropped Jani's hand as though it burned, wheeled, and darted out of the bathroom, through the locker area and out the door.

"Shit." Jani bolted after her, pushing through the gaps in sliding panels and triggering safety alarms. More bleating, cut off in midyap as she freed herself and broke through into the hallway.

"Where the hell—?" Jani stilled. Listened for the pound of shoes against hard flooring, a cry or a shout.

"If you don't stop playing around, I'm going to report you."

Jani spun toward the voice. It belonged to an older woman, a clerk for one of the other shippers. Sour face and a tatty coverall in clashing shades of brown. "Did you see a girl run out of the locker room a few seconds before I came out?"

"All I've seen is you making an ass of yourself." The woman looked Jani up and down and sniffed. "It's all I've heard, too." She pulled herself up straight, the top of her clipped hairdo barely reaching Jani's shoulder. "Some of us have work to do." With that, she brushed past Jani and keyed into the locker room.

Jani waited a few moments more, until a door at the far end of the corridor opened. and a pair of men emerged. She turned her back so they wouldn't see her face, walked to the dock entry, then stopped. She couldn't handle Royson yet. Her heart still beat slow and steady. Sounds still seemed to echo inside her head. And now . . .

Augmentation has its benefits, Lieutenant Kilian. You'll find that under conditions of panic, you will remain calm. Any wounds you suffer will heal more quickly. You will be able, under certain conditions, to exhibit controlled bursts of greater than average strength.

That had been the good news.

However, augments exhibiting your particular brain chemistry might hallucinate under certain conditions.

The Service doctor had made it sound so innocuous.

What would he have considered extreme? The near occasion of death? Years spent hiding, lying, stealing?

—sensitivity to the color red—

Less said about that, the better.

—at those times, the implanted gland itself may require resetting in order to maintain proper function. I'm sure you've heard the word 'takedown' around the place. These need to be performed periodically, otherwise—

Bless me, Doctor, for I have sinned. It's been—Jani counted on her fingers—five years since my last takedown. She walked back down the hall and reentered the locker room. Into the bathroom, and the stall two doors removed from the one currently occupied by the scolding clerk. Assuming she's in there. Assuming she wasn't another artifact of a neurochemical cascade gone haywire.

Jani dragged the cubicle door closed, then slumped against the cold metal wall. Did I just hallucinate? The girl, the woman, the men at the end of the corridor? Fellow augments had always told her that if you thought you were hallucinating, you weren't hallucinating, but she had always chalked that up to wishful thinking. If you think you might be crazy, you're not crazy. No. If you thought you might be crazy, you needed to see a medico. Except that I can't. Because if she ever walked into a hospital, they'd never let her out. Except to transfer me to the nearest Service brig. Because the Service had been looking for her for a long time.

Five years. That long since she'd worn a uniform. Snapped a salute. Five years since she'd answered to the name she'd been born with. Jani Moragh Kilian. Born in the city of Ville Acadie, Acadia Colony, twenty-nine Common years before she had taken to seeing girls who weren't there and hiding in station bathrooms to assess her sanity.

From two stalls down, the stopped drain sounds of a flushing toilet. Coughing, followed by muttering about the workload.

Would I hallucinate the sound without any visuals? Jani knew augments who had, but they were rarities according to the Service doctors. Of course, it had occurred to her more than once since that time that the Service doctors had lied through their collective teeth.