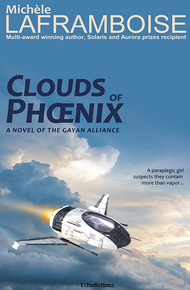 Michèle Laframboise feeds coffee grains to her garden plants, runs long distances and writes full-time. Fascinated by sciences and nature since she could walk, she draws from her scientific background to create worlds filled with humor, invention and wonder. Michèle has published 19 novels and about 45 short-stories in French and English, earning various distinctions in Canada and Europe.

Clouds of Phoenix by Michèle Laframboise

A disabled girl no one takes seriously. A threat written in the sky. A budding colony marked for death.

Blanche, a paraplegic girl walking in a cobbled-up exoskeleton, spent long hours watching the strange clouds dancing in the Phoenix sky. She soon realizes that their coordinated figures signals a threat. Alas, the adults building their new city discard her concerns. Even her shy sister Lupianne worries more about the oxygen plant's dropping quotas and her rows with the local "queen bee".   Then, as the cloud dances grow more complex and the temperatures rise to never-seen-before levels, the sisters must join forces with a despised artist to save their budding settlement from total eradication.  Clouds of Phoenix is a novel set in the Gayan Alliance universe of multi-award winning author Michèle Laframboise. If you like stories featuring a disabled heroine and her much put-upon sister going against family and dangers, you'll love this clever planet-opera.

Get Clouds of Phoenix to discover the strangest alien contact ever described in science fiction!

Michèle writes award-winning bestselling fiction in English and in French, something that amazes me every single time I think about it. Like Leigh Saunders, Michèle has a novel in this bundle and a startling short story in Fiction River Presents. – Kristine Kathryn Rusch

1 - The Dreamer in the Ruins

Blanche ran as fast as she could. Which was: faster than anything on the planet.

Her slender arms waving like a bird's wings, her legs pumping the ground eight times per second, she inhaled the saline air flowing from the distant sea.

The overhead sky was the color of tender grass, a reverse pasture grazed by a herd of fluffy sheep. In a strong contrast, the mineral land replied with tawny shades of honey, oranges, rusty reds, ash grey…

Jumping from a crumpled wall to another, the girl dashed across the ruins sitting downstream of the new town. Her city harbored the builders of the future Phoenix, as the mayor affirmed at every New Year banquet.

The planet was named after her unique continent, its shape suggesting a great bird raising his beak as to defy the water. The bird shook away some feathers, forming a string of archipelagos. Along is vertebral spine, a mountain range Michèle Laframboise 2 dominated the highlands.

A tiny cut on the bird's neck, the valley inhabited by the colonists enjoyed a temperate climate. The ocean thrived with indigenous life, which had yet to take over the firm ground.

Blanche soon found herself on the highest point of the dead city: the temple. At least, that had been how the archaeologists named this abstract-patterned floor, surrounding a high table carved into black polished stone, like the sacrificial altar of the ancient religions. In a single leap, the young pioneer reached the top of the massive block.

A quick look to her oxygen puffer light showed a dark green circle. She had more time left to trot outside the Bubble that enclosed the town. Phoenix might be classed as an open world, but the oxygen mass counted only for a hundredth of the atmosphere, not enough to breathe. The planet's rating, O-, reflected the scope of the terraforming effort needed.

Phoenix had a lesser note than the "P" planets, soft-climate paradises where any patch of land was disputed for fortunes. However, living on Phoenix was more enjoyable than squeezing under the pressurized domes of the closed worlds or in the floating cities of the gaseous giants.

Calypso, a G4 rated star, solitary and inconspicuous, has just risen, her light veiled in a milky halo. This halo was due to a thick dust layer hovering in high atmosphere. Those particles, diffusing the green wavelength, generated the sky color.

Blanche crossed her long legs, a tricky task considering the intricate framework of metal, pumps and pistons around them. Straps rose to her shoulders and encircled her waist to keep her inside the apparatus.

She used her basin and torso to direct the crude robo-servers inserted in the mechanical joints of the frame. Clumsy at first, when her father had fitted her with the contraption, her moves had become as natural to her as brushing her hair.

Those mechanical "overalls" enabled Blanche to run, fast. Only a full speed off-road vehicle could catch up with her… if she let it.

A playful wind lifted her long hair strands, trying in vain to steal them. Blanche took out a nutrient bar and nibbled at the sweet chocolate and wheat savor. This was her own precious moment of solitude.

Her gazed traveled over the low walls, the remains of razed habitations. Here and there, spikes wearing red, orange and sky green ribbons warned the rare walkers of the presence of treacherous hidden wells and other dangers.

The dead city had no name. The crews that had mapped, analyzed, dissected, memorized it had long since departed towards more exciting challenges. No scripts graced the arches and the murals.

The best translators had tolled in vain on the abstract patterns covering the floors. No tool, no tombs helped reconstitute the life of its inhabitants. No clue hinted to the nature of the cataclysm that had annihilated the city.

In front of her, the valley broadened as to offer the dead city to the plains. The river traced a series of meanders where sand and stones snatched from the landscape accumulated.

Then, the Ubu split in a dozen streams brimming over the delta before escaping into the ocean.

Blanche ate the wrapping of her bar, enjoying the marshmallow taste, and chased it down with a few gulps of treated water.

She lay on her back to look at the clouds.

A dizziness fell over her. The young girl felt that, any time now, her body would loosen itself from the rock and fall in this endless green void, ripping the frail threads of cloud.

Then, the first dancers appeared.