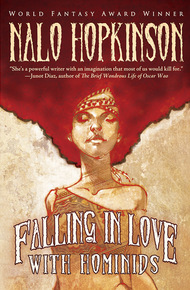 Falling in Love with Hominids by Nalo Hopkinson

Nalo Hopkinson (Brown Girl in the Ring, Skin Folk) has been widely hailed as a highly significant voice in Caribbean and American fiction. She has been dubbed "one of our most important writers," (Junot Diaz), with "an imagination that most of us would kill for" (Los Angeles Times), and her work has been called "stunning," (New York Times) "rich in voice, humor, and dazzling imagery" (Kirkus), and "simply triumphant" (Dorothy Allison).

Falling in Love with Hominids presents more than a dozen years of Hopkinson's new, uncollected fiction, much of which has been unavailable in print, including one original story. Her singular, vivid tales, which mix the modern with Afro-Caribbean folklore, are occupied by creatures unpredictable and strange: chickens that breathe fire, adults who eat children, and spirits that haunt shopping malls...

Nalo Hopkinson hardly needs an introduction – she is one of the most distinguished voices of speculative fiction in the world today. Winner of the World Fantasy Award, hugely influential anthologist and author, this is her latest story collection, so snap it up! – Lavie Tidhar

"Bite me," said Max. "There's no such thing as an easthound." His voice was deeper than it had been last week. No use pretending. He was growing up. Millie put a bit more distance between him and her. Max really was getting too old. If he didn't do the right thing soon and leave on his own, they'd have to kick him out. Hopefully before something ugly happened.

Citron closed the door behind them. It was dark in the house. Millie tried to listen beyond the door to the outside. That had been no wolf howling, and they all knew it. She tried to rub away the pain in her wrist. "Do we have any aspirin?"

Citron sat with a thump on the floor and started to sob. "I hate this," he said slurrily. "I'm cold and I'm scared and there's no bread left, and it smells of mildew in here—"

"You're just drunk," Millie told him.

"—and Millie's cranky all the time," Citron continued with a glare at Millie, "and Sai farts in her sleep, and Max's boots don't fit him any more. He's growing up."

"Shut up!" said Max. He grabbed Citron by the shoulders, dragged him to his feet, and started to shake him. "Shut up!" His voice broke on the "up" and ended in a little squeak. It should have been funny, but now he had Citron up against the wall and was choking him. Jolly and Sai yanked at Max's hands. They told him over and over to stop, but he wouldn't. The creepiest thing was, Citron wasn't making any sound. He couldn't. He couldn't get any air. He scrabbled at Max's hands, trying to pull them off his neck.

Millie knew she had to do something quickly. She slammed the bottle of vodka across Max's back, like christening a ship. She'd seen it on tv, when tvs still worked. When you could still plug one in and have juice flow through the wires to make funny cartoon creatures move behind the screen, and your mom wouldn't sprout in front of your eyes and eat your dad and bite your hand off.

Millie'd thought the bottle would shatter. But maybe the glass was too thick, because though it whacked Max's back with a solid thump, it didn't break. Max dropped to the floor like he'd been shot. Jolly put her hands to her mouth. Startled at what she herself had done, Millie dropped the bottle. It exploded when it hit the floor, right near Max's head. Vodka fountained up and out, and then Max was whimpering and rolling around in the booze and broken glass. There were dark smears under him.

"Ow! Jesus! Ow!" He peered up to see who had hit him. Millie moved closer to Jolly.

"Max." Citron's voice was hoarse. He reached a hand out to Max. "Get out of the glass, dude. Can you stand up?"

Millie couldn't believe it. "Citron, he just tried to kill you!"

"I shouldn't have talked about growing up. Jolly, can you find the candles? It's dark in here. Come on, Max." Citron pulled Max to his feet.

Max came up mad. He shook broken glass off his leather jacket, and stood towering over Millie. Was his chest thicker than it had been? Was that hair shadowing his chin? Millie whimpered and cowered away. Jolly put herself between Millie and Max. "Don't be a big old bully," she said to Max. "Picking on the one-hand girl. Don't be a dog."

"If . . . that thing was happening to you," Jolly interrupted him, "you wouldn't care who you were hurting. Besides, you were choking Citron, so don't give us that innocent look and go on about not hurting people."

Max's eyes welled up. They glistened in the candlelight. "I'll go," he said drunkenly. His voice sounded high, like the boy he was ceasing to be. "Soon. I'll go away. I promise."

"When?" Millie asked softly. They all heard her, though. Citron looked at her with big, wet doe eyes.

Max swallowed. "Tomorrow. No. A week."

Max made a small sound in his throat. He wiped his hand over his face. "Three days," he agreed.