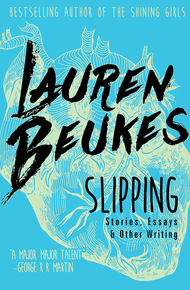 Lauren Beukes (The Shining Girls) is an internationally award-winning and bestselling South African author. Her novels include Broken Monsters, Zoo City, and Moxyland. Her graphic novel work includes Vertigo's Survivor's Club, the Fables spin-off Fairest, and Wonder Woman. Beukes's nonfiction has been published in magazines including The Hollywood Reporter, The Sunday Times, Marie Claire, and Elle. Her fiction has won praise from the likes of Stephen King, George R. R. Martin, James Ellroy, Gillian Flynn, and her work has been translated into twenty-six languages. Her books have been regularly featured in best of the year roundups by outlets such as NPR, Amazon, and the Los Angeles Times. Beukes has received the Arthur C. Clarke Award, the University of Johannesburg prize, and the Strand Critics Choice Award. She lives in Cape Town, South Africa.

A Punk Lolita fighter-pilot rescues Tokyo from a marauding art installation. A young architect's life is derailed by an inquisitive girl who happens to be a ghost. Unwitting recruits discover biohazardous plants on an inhospitable planet. Loyalty to a favorite product can be addictive when it gets under your skin.

In her edgy and satiric debut collection, award-winning South African author Lauren Beukes (The Shining Girls) never holds back. Ranging from Johannesburg to outer space, Beukes is a fierce and captivating presence in the literary landscape.

South African Lauren Beukes burst onto the scene like a gunshot, collecting an Arthur C. Clarke Award for Zoo City before launching the international thriller The Shining Girls across the world. She's also a terrific short story writer, and this is her very first collection! – Lavie Tidhar

Pre-race. A huge +Games banner hangs above the entrance of the Karachi Parsi Institute, or KPI. It's an old colonial building that has been extended to accommodate them, the track built over the old cricket ground and into the slums. The original school has been turned into the athletes' village, classrooms converted to individual medical cells to cater to their unique needs. Pearl's, for example, has hermetic bio-units and sterile surfaces. The window has been fused shut to prevent polluted air leaking in.

In the room next door, they installed extra generators for Charlotte Grange after she plugged in her exo-suit and tripped the power for the whole building. Pearl can hear her grunting through the walls. She doesn't know what Siska Rachman has. Do the technically braindead still need to eat?

She sits on the end of her bed, paging through the official program while Tomislav paces the room, hunched over his phone, his hand resting on his nose. "Ajda! Come on!" he says, in that Slavic way that makes the first part of the sentence top-heavy. Like Tomislav himself, still carrying his weightlifter bulk all squeezed up into his chest and neck. He doesn't compete anymore, but the steroids keep him in shape. The neon lights and the white sheen off the walls make his eyes look bluer, his skin paler. "Peach" she was taught in school, as if "peach" and "brown" were magically less divisive than "black" and "white", and words could fix everything. But Tomislav's skin is not the warm orange of a summer fruit, it's like the milky tea she drinks at home.

Tomislav has thick black hair up his arms. She asked him about it when they first met at the Beloved One's house on the hill. Fourteen, too young and too angry to mind her elders, even though her mother gasped at her rudeness and smacked her head.

Tomislav had laughed. Testosterone, kitten. He tapped the slight fuzz above her top lip. You've got it too, that's what makes you so strong.

He's since made her laser all her unsightly hair. Sport is all about image. Even this one.

He sees her looking at him and speaks louder. "You want to get a meeting, Arturo, we gotta have something to show." He jabs at the phone dramatically to end the call. "That guy! What does he think I'm doing all day? You all right, kitten?" He takes her by the shoulders, gives them a little rub. "You feeling good?"

"Fine." More than fine, with the voices of the crowd a low vibration through the concrete, and the starting line tugging at her insides, just through that door, across the quad, down the ramp. She has seen people climbing up onto the roofs around the track with blankets.

"That's my girl." He snatches the program out of her hands. "Why are you even looking at this? You know every move these girls have."

He means Siska Rachman. That's all anyone wants to talk about, the journos, the corporates. Pearl is sick of it, the interviews for channels she's never heard of. No one told her how much of this would be talking about racing.

"Ready when you are," Dr. Arturo says into her head, speaking through the audio implant in her cochlear. Back online as if he's never been gone, checking the diagnostics. "Watch your adrenaline, Pearl. You need to be calm for the install." He used to narrate the chemical processes, the shifting balances of hormones, the nano-enhancing oxygen uptake, the shift of robotic joints, the dopamine blast, but it felt too much like being in school; words being crammed into her head and all worthless anyway. You don't have to name something to understand it. She knows how it feels when she hits her stride and the world opens up beneath her feet.

"He's ready," she repeats to Tomislav.

"All right, let's get this show pumping."

Pearl obediently hitches up her singlet with the Russian energy drink logo—one of Tomislav's sponsors, although that's only spare change. She has met the men who have paid for her to be here, in the glass house on the hill, wearing gaudy golf shirts and shoes and shiny watches. She never saw them swing a club, and she doesn't know their names, but they all wanted to shake her hand and take a photograph with her.

She feels along the rigid seam that runs in a J-hook down the side of her stomach, parallel with her hysterectomy scar, and tears open the velcroskin.

"Let me," Tomislav says, kneeling between her legs. She holds her flesh open while he reaches one hand up inside her abdomen. It doesn't hurt, not anymore. The velcro releases a local anesthetic when it opens, but she can feel an uncomfortable tugging inside, like cramps.

Tomislav twists off the valves on either side, unplugs her stomach and eases it out of her. He sets it in a sterile biobox and connects it to a blood flow. By the time he turns back, she is already spooling up the accordion twist of artificial intestine, like a magician pulling ribbons from his palm. It smells of lab-mod bacteria, with the faintest whiff of feces. She hands it to Tomislav and he wrinkles his nose.

"Just goes to show," he says, folding up the crinkled plastic tubing and packing it away. "You can take the meat out of the human, but they're still full of shit!"

Pearl smiles dutifully, even though he has been making the same joke for the last three weeks—ever since they installed the new system.

"Nearly there." He holds up the hotbed factory and she nods and looks away because it makes her queasy to watch. It's a sleek bioplug, slim as a Communion wafer and packed with goodness, Dr. Arturo says, like fortified breakfast cereal. Hormones and nanotech instead of vitamins and iron.

Tomislav pushes his hand inside her again, feeling blindly for the connector node in what's left of her real intestinal tract, an inch and a half of the body's most absorbent tissue for better chemical uptake.

"Then let's go," Pearl says, standing up on her blades.