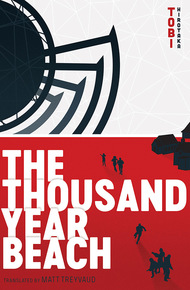 TOBI Hirotaka was born in 1960 in Shimane Prefecture. He was the winner of the Sanseido SF Story Contest while a student at Shimane University. From 1983 to 1992 he actively contributed short stories to SF Magazine. After a ten-year hiatus, he returned in 2002 with his first full-length novel, The Thousand Year Beach (Grande Vacance). In 2004, his short fiction collection Kaleidoscape, won the 2005 Nihon SF Taisho Award. The title story also won the 2005 Seiun Award for Best Japanese Short Story of the Year. "Autogenic Dreaming: Interview with the Columns of Clouds" earned TOBI his second Seiun Award for Best Japanese Short Story in 2010 and appeared in English in The Future Is Japanese, and his third came for "Sea Fingers" in 2015, which appeared in English in Saiensu Fikushon 2016.

Designed in imitation of a harbor town in southern Europe, the Realm of Summer is just one of the zones within the virtual resort known as the Costa del Número. It has been more than a thousand years since human guests stopped coming to the Realm, leaving the AIs alone in their endless summer. But now all that has come to a sudden end, as an army of mysterious Spiders begin reducing the town to nothing. As night falls, the few remaining AIs prepare for their final, hopeless battle… War in the virtual world begins on the shores of The Thousand Year Beach.

We're lucky to have Japanese SF novels in translation through Haikasoru. This one's as weird and wonderful as you'd expect, about A.I.s in a virtual world people have stopped visiting. – Lavie Tidhar

Yve had started to get the hang of the motion.

She could not contain her excitement. No matter where in the clouds of sensation she placed her focus, she found what felt like limitless information and nuance waiting to be taken out.

The green smell of the woods, the heavy radiant heat of the charcoal, the clear sheen of the fat oozing from the cut face of the meat, the hard, smooth skin of the porcelain toilet.

Yve began to worry. Presumably, the sensations that poured into the Chandelier would be unified, forming an identity boundary for the hotel itself. The hotel—the whole thing, right down to the AIs and Eyes inside—would be made into a single animal, fast and ferocious, to strike at the Spiders. This was Jules's vision.

And, at the heart of it all—there I'll be.

Yve was enraptured by the thought.

The front of the hotel was ablaze with every source of light that had been available. The windows were bright all the way up to the fourth floor. The hotel's front yard was as bright as day.

More than thirty people were present, making them the largest group of defenders. The hotel's two wings enclosed the private beach and yard; this side, with the front yard and forest, was

longer, and harder to defend. No doubt that was why Bastin had volunteered here.

The Spiders had already pushed forward right to the edge of the light. Yve could sense them out there in the darkness clearly, a writhing mass of Spiders of every shape and size.

Bastin stood under the roof of the porte cochère. Pierre emerged from the lobby to offer him some coffee in a small tin cup.

"Does your house receive guests?"

"Yes. My younger sister. The role is empty. So the guests are usually young women."

"I wonder what that's like. We don't have guests at my house. It seems I'm not the type to arouse much interest."

"You should be glad of it. There's nothing good about having guests come to visit."

Pierre scratched his ear, blue eyes clouding over. The chain at his wrist jangled.

The chain, Bastin noticed, was connected to a metal shaft that went through Pierre's wrist. He turned his eyes away.

"Well, I suppose they do beat Spiders."

And then he stopped the jangling.

In the next moment, a single Spider emerged from the darkness. It looked less like an arthropod than a fishbone laid flat. Its "ribs" were jointed in the middle and reached down to act as legs. A single fork-shaped antenna waved from its head. It was about as big as a cow.

It darted across the front yard with the unnatural lightness of a marionette and then leapt up, trying to cling to the wall of the hotel.

the Spider was engulfed in a ball of fire.

Dazzling gouts of flame roared from the hotel wall, crushed the Spider as if in an infernal fist, then exploded. A heat wave and a shock wave.

In the casino, people screamed as the building shuddered.

Jules started to rise from the sofa, but the old man who shared his name grabbed him by the arm.

There was a distant cheer from the front yard. The trap had worked perfectly. Deeply relieved, Jules sank back into the sofa.

But the atmosphere in the casino was agitated. The explosion had them panicking.

"It's all right," he heard Julie saying. "Everyone, the hotel is fine. Don't panic."

Jules chimed in, raising his voice too. "The Father of Flame went off as planned," he said. "That's all. We got one of the Spiders, I think."

"Exactly!" said Julie. "I saw it happen. No." Then she looked down at the table again and continued her concentration.

The five women were arranged around the table peering into the Chandelier.

Their faces shone in its gleaming light.