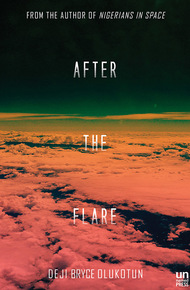 Deji Bryce Olukotun is the author of Nigerians in Space. His work has been featured in Vice, Slate, The New York Times, The Los Angeles Times, The Los Angeles Review of Books, the Wall Street Journal, National Public Radio, The Atlantic, Guernica, The Millions, World Literature Today, ESPN, and elsewhere. After the Flare is the second novel in the Nigerians in Space series.

After the Flare by Deji Bryce Olukotun

•A catastrophic solar flare reshapes our world order as we know it – in an instant, electricity grids are crippled, followed by devastating cyberattacks that paralyze all communication.

Kwesi Bracket is an industrial engineer who works for NASA's Neutral Buoyancy Lab, running space-walk simulations for astronauts when the flare hits. His life quickly disintegrates – he loses his job and his wife leaves him, forcing him to take care of his daughter by himself. Meanwhile, America slowly descends into chaos as people turn inward to protect themselves.

Bracket soon discovers that Nigeria operates the only functioning space program in the world, which is recruiting scientists to launch a daring rescue mission to save a famous astronaut stranded aboard the International Space Station. With Europe, Asia, and the U.S. knocked off-line, and thousands of dead satellites about to plummet to Earth, Bracket heads to Kano in Northeastern Nigeria. But what he finds there is anything but normal. In the aftermath of the flare, the country has been flooded with advanced biohacking technologies, and the scramble for space supremacy has attracted dangerous peoples from all over Africa. What's more: the militant Islamic group Boko Haram is slowly encroaching on the spaceport, leaving a trail of destruction, while a group of nomads has discovered an ancient technology more powerful than anything he's ever imagined.

With the clock ticking down, Bracket – helped by a brilliant scientist from India and an eccentric lunar geologist – must confront the looming threats to the spaceport in order to launch a harrowing rescue mission into space.

In this sequel to Nigerians in Space, Deji Bryce Olukotun poses deep questions about technology, international ambition, identity, and space exploration in the 21st century.

Who can resist a novel called Nigerians in Space – especially when it's followed by this, an actual SF novel set in Nigeria? Deji Bryce Olukotum deserves wide notice and this novel is, as Kirkus have rightly said, a pleasure to read. – Lavie Tidhar

That was the night the sun wrapped Earth in colors like glowing sheets of cellophane. Masha Kornokova was peering through a porthole facing the dark side of the planet, Moscow and Berlin dotting the matte black surface as pinpricks of light. She had just finished a six-hour space walk with Stankov and had swiveled to look back, like she always did. It was her ritual—to remind herself that she had fulfilled her dream and that she was actually here, in space, floating above it all.

Through the porthole, intense light blinded her momentarily, and when she could see again, Earth was bathed in lime, purple, and tangerine light, the colors dancing like playful sprites along the crest of the globe. Almost as quickly, the light dissipated, and the entire hemisphere fell dark. Moscow and Berlin were gone, extinguished. The moon was the only source of illumination, reflecting onto carded-wool clouds as the Atlantic Ocean slid away beneath them.

"Did you see that?" Stankov whispered, having come alongside her.

"Get to the capsule!"

"Get your suits on!"

The two astronauts hurtled through the station, clutching handhold after handhold, passing the mess room, then the Destiny module, control panels shorting out around them. The emergency lighting cast a washed-out pall over the place. Kornokova, just behind Stankov, saw a bright trail of sparks erupt above his helmet.

But her comms were dead. She pulled him away by the arm, spotting a lick of flame shooting along his suit liner as he clutched his head. His oxygen line was torn. The gas was hissing out of it. If the flame touched it, he would go up in a fireball.

She pushed off toward the opposite wall and wrested a canister from its Velcro strap, while Stankov swatted blindly at his head, trying to extinguish the source of the heat. With his own comms lost, he was shouting uselessly into his microphone. She pulled the pin from the canister and showered him with foam suppressant.

Immediately Stankov twisted off his helmet, and she saw that the skullcap of his suit liner was smoldering, so she doused that too. It looked bad. The cream-colored liner had melted onto his skin, and Stankov was already clutching at his scalp with his eyes shut tight. He was a tough man—trained in the Bulgarian Special Forces—who never complained. But he was in excruciating pain.

They tried to hail CapCom from within the JEM module but couldn't get a signal, and moved quickly to the Columbus, but still no one responded. Everyone seemed to have disappeared. They kept pulling themselves along toward the Russian end of the space station, where they found the rest of the crew sealed in the Soyuz escape capsule. There were four astronauts on the station, including Masha and Stankov, and the other two, Jeppsen and Hiroyuki, were huddled inside the capsule. Kornokova rapped her glove on the hatch until someone opened the door.

Kornokova noticed then the smeared blood on her suit. "No, it's Stankov."

"This capsule was shielded and withstood the bulk of the flare," Hiroyuki explained. "We're talking to CapCom now."

On the comms, Kornokova could hear their mission director, Josephine Gauthier, barking information.

"We're sending you an updated emergency plan. We weren't prepared for a coronal mass ejection of this intensity. Even radiation-hardened electronics have been pulverized by it. We'll be on generators down here within four hours."

Then, noticing her for the first time: "Masha, you're okay?"

Josephine never called Kornokova "Masha" on an open channel. Kornokova could register the concern in her voice, the subtle uplift as she pronounced her name.

"We have detected that the Zarya module has adequate power to support a crew member for six months. There are enough supplies in the offline modules to last much longer, recoverable through EVAs. Our primary concern is orbital decay."

"Propulsion is out too?"

"Yes, both engines on the station have been damaged. The current plan is to evacuate."

"I don't understand," Kornokova said. "We can stay in orbit for three years, even without propulsion."

"Our projections show that the CME will cause the atmosphere to expand, increasing drag on the station. You'll fall out of orbit within twenty-four months, if not sooner. We expect to lose thousands of low Earth orbit satellites."

"All from a solar flare?"

"Listen to me, Masha. Nothing is working." She registered a hint of fear in Josephine's voice.

"We've got about two hours of emergency power left here in Paris. This is global. By our estimates, all electricity transformers have been destroyed in North America, Europe, and Asia. The Arianes were in the loading docks at Marseille. They're finished. All of the North American rockets are fried. No one else has one ready. Conservative estimates suggest an eighteen-month recovery time for basic infrastructure. For all intents and purposes, most of the world has gone dark. There is"— Josephine paused, trying to find the right words—"total chaos down here."

"What are our orders?" Kornokova said.

"Commander Kornokova, Rilke, and Kazuhito will take the Soyuz down using the instructions I'm uplinking to you now."

Calling me Kornokova again, Masha thought. Back to work. That is good.

"The capsule's designed for two," Josephine went on, "but it can accommodate a third passenger with some modifications. We can't guarantee an extraction if you land in the sea, so you'll have to guide it to land. Stankov will remain behind for a rescue mission."

"Stankov should get in the capsule," Kornokova said. "His suit caught fire."

"I am fine," Stankov intoned.

"No, you're not. It's a substantial burn." Kornokova caught a furrow appear over Josephine's eyebrow.

"Hiroyuki, take a look," Josephine ordered. The medic maneuvered out of the capsule to examine Stankov's scalp.

He turned the astronaut's head this way and that, Stankov wincing from the pain.

"Masha's right, third-degree burn," Hiroyuki concluded. "He can't remain on board without being operated on—he'll need a skin graft. Antibiotics could stave off an infection for about six weeks."

On-screen, Josephine tied her dreadlocks into a ponytail. She couldn't bring herself to give the order, so Kornokova did it for her.

"The evacuation plan says that you should go, Masha."

"You wrote that plan, Josephine. The plan says that the most able-bodied crewmembers should always remain. I have no injuries. I've trained for this."

"You've been up there for six months already, Masha. You've lost a lot of bone mass."

It hurt to watch Josephine pleading with her in front of the crew, something she would never have done under normal circumstances. In fact, Josephine rarely acknowledged that they had known each other for more than the duration of the mission. Six months since they had last awoken in each other's arms, pushed together by gravity. Six months since feeling the slip of skin on skin. She missed Josephine more than she missed anything else on Earth.

"I choose to remain here," Stankov tried to insist. He had a strong machismo impulse.

"You're evacuating, Stankov," Josephine decided. "That's an order. You all will be. We'll come back for you, Masha. If this station falls out of orbit, there is an eighty-five percent chance it will strike land. Our current projections show a deorbital footprint landing on Mumbai, India. Most of the station will burn up, but some of it will certainly fall in a populated area. Let's get to work. There is no time for arguments. Follow the procedures." But she didn't sign off. Her face lingered on the screen, as if afraid to cut the connection. "I'll see you soon, Masha."

"I love you," Kornokova said out loud.

She didn't care anymore. The crew all knew anyway. They had kept their relationship off the air so that the media wouldn't cover it. Their love had always been tempestuous, passionate: two fiercely ambitious women who bowed before no one. Yet they were cautious when separated, cold even, repelling everyone around them and sometimes even each other. Josephine touched her finger to her lips.

Later, as the rest of the crew finalized their evacuation procedures, Kornokova began her inventory of the items that would keep her alive. This cramped place, which she had shared with three other people for six months, would now be her own. Perhaps there would be comfort in that. No dependence. No passive-aggressive comments about escaped boluses, or body wipes, or rehydrated packets of soybeans. Then again: no conversations at all.

Everyone on Earth would soon be offline, Josephine had indicated. What did that mean? When Kornokova became homesick—which was rare—she could take solace in the fact that Josephine stood on firm ground. What would happen to Josephine now? Yesterday she had said she was going to drive to Montpellier for a holiday by the sea, her first day off in months. She would have to cancel that trip now. Maybe Josephine would sleep more soundly without the electric hum of the world. But she had always slept fitfully without Kornokova by her side, complaining when she slipped into bed late.

Kornokova pushed herself farther from the capsule. Time to focus. Time to get away from the cloying emotions. Get things started. This was temporary. This was just another assignment, one that they would finish together.

I am three hundred kilometers above you, Josephine, and falling all the time. I will be a streak in the night when I come to you.