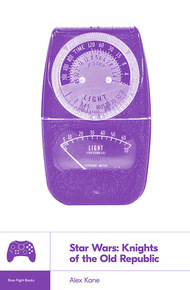 Alex Kane is a journalist based in west-central Illinois. He has written for Polygon, the website of Rolling Stone, StarWars.com, Variety, and other publications. This is his first book.

Set an even longer time ago in a galaxy far, far away, BioWare's 2003 Star Wars: Knights of the Old Republic wowed players with its compelling characters, lightsaber customization, complex morality choices, and one of the greatest plot twists in both video game and Star Wars history. But even for veteran studios like LucasArts and BioWare, the responsibility of making both a great game and a lasting contribution to the Star Wars canon was no easy task.

Featuring extensive new interviews with a host of KotOR's producers, writers, designers, and actors, journalist Alex Kane weaves together an epic oral history of this classic game, from its roots in tabletop role-playing and comic books, to its continued influence on big-screen Star Wars films. Whether you align with the light or the dark side, you're invited to dive into this in-depth journey through one of the most beloved Star Wars titles of all time.

Anecdotally, I've found that diehard BioWare fans discovered the company's foundational RPGs through one of two games: Baldur's Gate on PC, or, for console players, Star Wars: Knights of the Old Republic. Alex Kane does a phenomenal job dissecting the look, feel, and history of BioWare's seminal Star Wars RPG, resulting in an oral history that fans of Star Wars and/or RPGs should not miss. – David L. Craddock

With the exception of George Lucas, there's one name that's appeared in the credits of more Star Wars games than anyone else's: Darragh O'Farrell. For more than two decades, he's been the go-to voice-over (VO) director for Star Wars video game projects, in the LucasArts era and beyond.

O'Farrell was working in animation in Los Angeles, circa '94, when he got wind that LucasArts was on the hunt for a VO director. "The company could see things were going from floppy disk to CD-ROM," he says. "As a film company, they needed to embrace the talent side of things a little bit more, which is how I ended up starting there." O'Farrell's first game was The Dig, a 1995 point-and-click adventure adapted from a story by Steven Spielberg. It starred Robert Patrick, who'd played the villain in Terminator 2, and featured cutscenes by Lucasfilm's renowned visual-effects studio, Industrial Light & Magic. "We were used to doing games that had like 10,000 lines of [recorded] dialogue, when no other company was really doing that at the time," O'Farrell says.

What made the casting and sound departments at LucasArts unique, compared to other internal teams, was that they worked on all of the publisher's titles. With Star Wars games, in particular, music and sound design has always been one of the key pillars holding the larger experience together. Knights of the Old Republic would be no different.

"We did want to have the BioWare DNA of story, and companion characters that you cared about, and choices that had impact," lead designer James Ohlen recalls. "But we also knew this: We couldn't do something that was text-heavy like Baldur's Gate or Neverwinter Nights, because Star Wars is a very cinematic experience. And the fan expectations would be different than Dungeons & Dragons fans' expectations. They'd be less understanding of walls of text and lots of reading, which is why [KotOR] was the first game where all of the non-player characters had full voice-over."

O'Farrell remembers an early meeting with producer Mike Gallo and project director Casey Hudson, at which point the plan, he says, was still to do what BioWare had done in the past—a handful of spoken lines per interaction, with the majority of dialogue being displayed in text form. O'Farrell threw out a suggestion: "Why don't we record the whole thing?"

"We can do that?" said Hudson.

O'Farrell nodded. "As long as there's room on the disc." He told them he'd work on getting the budget approved; they still had about a year before it would be time to go into the studio.

"It was one of the most ambitious projects that LucasArts or BioWare had ever attempted," Gallo says. "I don't think BioWare had fully voiced anything in the same way that we were doing with this game. Certainly not that size. It was a huge budget for us, internally. It was a massive undertaking."

LucasArts got its money's worth, however. Pull up the IMDb entry on Knights of the Old Republic, and you'll be greeted with a veritable who's who of the voice-over industry. O'Farrell sent audition packets to a number of Hollywood agencies, casting the game largely with veteran actors from film, television, and previous LucasArts titles. A full paper copy of the game's script could fill ten large binders; it called for about 300 speaking characters with roughly 15,000 lines of dialogue. Following a traditional casting process, a hundred or so actors filled those roles.

Recording took place at Screenmusic Studios, on Ventura Boulevard in Los Angeles, over the course of five grueling weeks. O'Farrell was joined by voice coordinator Jennifer Sloan, and the two of them worked numerous sixteen-hour days in order to ensure the audio was ready six months out from release.

The great challenge of recording a BioWare RPG became apparent almost immediately: The game's structure was, for the most part, nonlinear. Every character, therefore, was given their own unique version of the script, and each actor had to be recorded individually. "The first week that I was in LA, James [Ohlen] was there, and he had his laptop, and every so often we'd get to a point where we weren't quite sure which way the branching was going," O'Farrell says. "And he would jump on and dig into the code a little bit, and then we would have a clearer direction." In later weeks, writer Drew Karpyshyn also assisted with some of the sessions.

"That's something a lot of the actors were doing for the first time," Karpyshyn says. "So you really needed someone there to give them an overview of how the branching narrative works, and how the storylines are gonna play out, depending on player choices."

"It's probably one of the earliest games where I remember a character being both dark and light," says Jennifer Hale, who voiced the Jedi Bastila Shan. "You know, having the ability to go in either direction. I remember doing a bunch of recording, and then coming back in for another round of recording, and them saying: 'Okay, now basically she's changing sides. She's completely shifting.' And I'm like, 'Oh! Okay. Let's do that.'"

The game's many quest lines and relationships could develop in different ways based on what the player chose to say, or depending on which planets they journeyed to first. But the player character's actions also affected their Force alignment; needless slaughter or malice could put a Jedi on the path to the dark side. Moral or immoral choices didn't merely change the game's ending but also altered the way companion characters, like Hale's, responded to the protagonist.

The character of Bastila speaks with a British accent—"Coruscanti," in the Star Wars universe. According to Hale, a Canadian-American actor, this is something that comes naturally. "I think in various dialects in my head, but British is definitely one of the primary ones, and that's always been a part of me. Since I was little, and just in the back of my head—I don't really know why. I just know it's there. And I went to a fine-arts high school [where] we studied dialects. I've put in my time. I work with coaches every now and then when I need a tune-up."

Hale's commitment to her craft is evident to even casual fans of games. She holds the Guinness World Record for "most prolific" female video game voice actor, and has voiced characters as diverse as The Elder Scrolls Online's Lyris Titanborn, Overwatch's Ashe, and Mass Effect hero Commander Shepard (or "FemShep"), who had her own version of the Force-alignment continuum courtesy of that game's Paragon–Renegade morality system. Tom Bissell, writing for The New Yorker, once called Hale "a kind of Meryl Streep of the form."