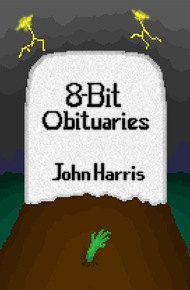 John Harris wrote the column @Play for GameSetWatch, compiled the book Exploring Roguelike Games for CRC Press, and has presented at Roguelike Celebration. He also does developer interviews for Gamasutra, and has written many other ebooks besides, which you can find on his itch.io page. He's also known to putter around in Python, and to make the occasional computer game. He has a Master's in English Literature.

The age of the NES was transformative for video gaming. The console, and its Japanese predecessor, the Famicom, were extraordinarily popular in that time. When a console is that popular, it attracts a lot of people to make games for it. Many of these games are good. Many of them, to put it bluntly, are not.

But it isn't always easy to decide which are which. Some games present many of the warning signs of a bad game, but there's something there, waiting, some might say lurking, for a persistent player to come along, to make them say, if just for a moment, "maybe this isn't so bad after all." And a few games were popular at the time but their stature has fallen, in recent times, as they get proclaimed the "black sheep" of their series.

Come with us on a journey through the Other Half of the NES library. The games that could have been, if they had a better developer, if they had put in just a bit more effort, if someone had cared about their license a little more, if there had been more marketing money to spare, or even if they had been released a little earlier. To find the grime-covered treasures, ignored or even derided by others. And once we've found them, we'll give you a few tips, just enough to get you started seeing the fun hidden beneath all the mud and gunk.

It's not that they're all great games. Some of them aren't even good. But they all have something there, some thing that can be enjoyed, even celebrated. At least you aren't stuck with only one to play until your next birthday.

Over the last 10+ years, online personalities have built a reputation—and, in some cases, a tidy profit—raking old games over the coals. Sure, those games weren't bad, but were they terrible? Historian John Harris puts panned games under his microscope in 8-bit Obituaries to determine if certain moldy oldies deserve the bad rap so many influencers have given them, and turns out another entertaining and thought-provoking volume that readers should add to their collection. – David L. Craddock

When people really hate a game, I mean in a visceral way that makes them fill a blog post with invective directed at it, it's probably because they found it to be hard. People really don't like to be told they suck by a machine, and if they can be sufficiently sarcastic about it, maybe they can convince others than it is, in fact, the game that sucks.

Well I'm not really going to dispute that it's hard, and an acquired taste. Deadly Towers is filled to overflowing with unfortunate experiences and maddening trials for you to experience. There's something to be said for the thought that games these days are much to "frictionless," anxious enough to avoid upsetting players in any possible way that they end up smooth like cooking oil and similar to each other, but to labor the analogy a bit further, Deadly Towers is harsher than sandpaper. It's ludicrous.

Every screen of your journey contains roughly a half dozen different ways to be killed dead dead. A little ambulatory campfire could pin you against a wall and suck out all your hit points in a second. A little blue pile of crud (that's actually its name, crud) lying on the ground could literally writhe the wrong way, and knock you, spinning, clean off a cliff. You could make contact with a bouncing ball, whoops there go all your hit points at once! If you die that way then everyone Heaven is going to call you Beach Ball for eternity. You could be offed by a cloud of random pixels floating by. Or you could merely backtrack through the wrong door, and appear inside a tough monster that you had killed going the other way, because monsters are often parked in front of doors and you forgot that all enemies revive when you change screens.

Sometimes, you're just walking along one of the many narrow treacherous paths, and a little winged, blue rat will zoom along behind you, in a split second, and inflict massive damage. Or knock you into the crumbling edge of the path, and kill you that way. Or knock you into a Deadly Beach Ball. Or send you backwards into a floating demon minding its own business. You know what happens when you get sent backwards into a floating demon? Spoiler warning! Here it is in ROT13: lbh qvr.*