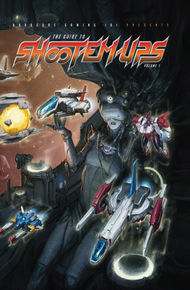 HG101 Presents: The Guide to Shoot-em-ups Vol. 1 by Kurt Kalata

Blast off and check out the first in HG101's line of books on shoot-em-ups! Volume 1 covers over fifty titles from the glory days of the 80s and 90s, by such legendary developers as Compile (Zanac, Aleste / Power Strike, MUSHA, Space Megaforce, The Guardian Legend), Hudson (Star Soldier, Gate of Thunder, Sapphire), Technosoft (Thunder Force, Hyper Duel), Irem (R-Type, X-Multiply, Dragon Breed), Cotton, Rayxanber, and several other individual titles like Recca, Magical Chase, Coryoon, and Gleylancer. Featuring a cover inspired by the works of Naoyuki Kato, who illustrated the Japanese artwork for The Guardian Legend.

"Shmups" was a favorite genre of mine growing up, one that unfortunately seems to have dried up in recent years. Kurt Kalata takes readers back to the genre's glory days in the '80s and '90s to uncover over 50 of the fastest, most frantic shooters. – David L. Craddock

One of the first shoot-em-ups I ever played was Power Strike for the Sega Master System. It was far too difficult for me, at seven years old, but it was still a fascinating game. Years later, I stumbled upon other similar games, like MUSHA for the Genesis, Blazing Lazers for the TG-16, and Zanac and The Guardian Legend for the NES. Though they had different names, they were all developed by Compile, who had absolutely insane output ? over the course of the decade, they developed at least twenty shoot-em-ups. While many of their titles were released in North America and Europe, there is still quite a bit of their catalogue that never left Japan, and this book will help connect all of the dots between them. One of the first articles on HG101 was a look at Compile's shooter library, but it was not only short but painfully incomplete. Producing this book was an opportunity for me to revisit all of them and put together a feature that was deserving of their legacy. The cover, by the extremely talented Michael Brennan, was inspired by the works of Naoyuki Kato, who illustrated the Japanese cover for The Guardian Legend.

There's more than just Compile games in here too, of course ? Compile's games are intertwined with both Hudson and Naxat, two major players in the 8/16-bit shoot-em-up scene, with both running tournaments all across Japan. We've also covered all of Technosoft's works, who are mostly known for the Thunder Force series on the Genesis, a platform that gave the PC Engine some solid competition for "best shoot-em-up library". Finally, we've covered most of Irem's shooter library. R-Type was another of HG101's early shoot-em-up articles, which also desperately needed some expansion, but we've also included some of their lesser known titles like X-Multiply, Dragon Breed, and Mystic Riders, all of which are high quality. We've also rounded out the list with a few other series and individual games, including Success's cute-em-up series Cotton.