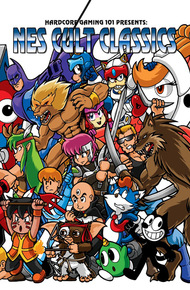 Whenever anyone thinks of the best developers on the Nintendo Entertainment System, the most popular are typically Konami, Capcom, and, of course, Nintendo themselves. But what of the numerous other developers, the ones that put out games you may have read about in Nintendo Power or have vague recollections of renting on some Saturday afternoon? This book covers many of those titles, from developers like Sunsoft (Blaster Master, Journey to Silius), Natsume (Shadow of the Ninja, Shatterhand), KID (Low-G-Man, KickMaster), Irem (Holy Diver, Metal Storm), Atlus (Rockin' Kats, Xexyz), and many others. Also included are reviews of several notable Japan-only Famicom games, including Layla, Otocky, Moon Crystal, Cocoron, Cosmic Epsilon, and several others, as well as the infamous unreleased title Bio Force Ape! While these all may not be the A-listers of the NES library, this book represents some of the more interesting, offbeat, and lesser discussed titles of the system, and is essential for anyone looking to expand their knowledge of the platform!

Every NES fanatic knows the joys of Super Mario Bros. 3, The Legend of Zelda, and StarTropics, but what of Shadow of the Ninja and (legitimately one of my favorites) Low-G-Man? If you're unfamiliar with either of those, let Kurt Kalata's guide to NES Cult Classics broaden your horizons with a look at pixelated pleasures you missed out on back in ye 8-bit times. – David L. Craddock

Welcome to the NES Cult Classics book! We've covered a lot of NES games in the past, but this is the first book that's solely devoted to the system itself. For this edition, we've decided to highlight some of the console's lesser-known games, titles that you may have remembered renting on a bored Saturday afternoon or gazing at in Nintendo Power (at least, if you were a kid back in that era, like I was).

The basic standards that had to be met were: (1) anything not by Nintendo, Konami, or Capcom, and (2) an original NES game and not a port of something else. As a result, most of the games featured here focus on titles from Sunsoft, KID, Natsume, and a few from Irem and Jaleco, along with some other smaller publishers and developers, and some of the better Japan-only Famicom games. We also decided to make one exception and fully feature the Blaster Master series, including its non-NES entries, just for completion's sake. (Originally we wanted to cover all of Sunsoft's NES library, but no one on staff wanted to spend more than a few minutes with Fester's Quest.)

Indeed, the basic definition of "cult classic" is kind of loose ? not all of these games are amazing, and some may be considered mediocre even in the best of assessments, but all have something interesting about them, enough that we were willing to write a thousand or so words each about most of them. Some of the lesser quality (but still worth checking out) titles are listed briefly near the end of this book. We've also included some coverage of a few infamous unreleased games, including one of the most well-known, Bio Force Ape.

Of course, there are many more NES cult classics than the ones listed here, but either they didn't meet our standards listed above, or they were covered in another HG101 book. For example, almost all of Konami's NES/Famicom output is pretty good, so please check out the Contra and Other Konami Classics book. Compile also put out some of the best shooters on the system, including Gun-Nac and The Guardian Legend, all of which are featured in the Guide to Shoot-em-ups Vol. 1. There are a handful of other series which may end up in a future book or digest (like A Boy and His Blob or Wizards and Warriors). We'll probably run a feature on more Japan-only Famicom RPGs in the future as well.