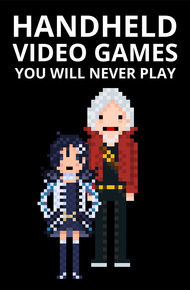 Handheld Video Games You Will Never Play by Unseen64

In 2016 45+ writers and editors from the Unseen64 collective published a physical crowdsourced book to educate the gaming world on the history of video games as an ephemeral art form. There's plenty of examples of what gaming history is losing every day. Now we are re-publishing the whole book into short eBooks - divided into chapters - so even more people could be able to read this interesting collection of forgotten stories, interviews, games and concepts. In this Summer Story Bundle you'll learn more about cancelled handheld video games planned for Game Boy, Virtual Boy, Game.com, Game Boy Advance, Nintendo DS and PSP.

On-the-go gaming exploded with Nintendo's Game Boy in 1989 and has continued to grow over the past 30 years. Adding to their library of relatively unknown titles across gaming platforms, the crew at Unseen64 has written another insightful guide into some of the best—or at least lesser-known—pocket-sized games overshadowed by Mario and company. – David L. Craddock