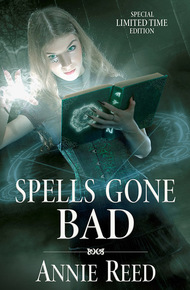 Some spells start life evil, others just turn out that way.

In this collection by award-winning writer Annie Reed, meet an evil warlock who crafts his spells in a modern mall, an Old West gunslinger who crosses the wrong wizard, and a water spirit trapped in the heart of a motorcycle. Get to know a diminutive fixer determined to discover why one of her own spells backfired, a devious historian whose airship—not to mention her mechanical uncle—run on more than just steam, and a man who wakes up after an epic party to discover someone turned him into a dog.

These stories and more fill the pages of Spells Gone Bad, a collection exclusively available now only for a short time through StoryBundle.

The motorcycle whispered to Twig as they zoomed past the shipyards at the south end of Moretown Bay.

Tucked safely inside her helmet, the tips of Twig's long ears quivered in response to the motorcycle's rumbling voice. She felt its yearning not only in the subtle change in its magic, but in the throaty roar of the engine as they increased speed, racing north on I-5 toward the city that shared its name with the bay.

Her words tore apart on the damp night air rushing past her, but she knew their meaning would still reach the heart of the machine that had been her friend for a decade. Not all magical beings needed ears to hear or words to understand.

As much as she wanted to get them both home, they couldn't afford to draw the attention of any police—or wizards—who might be patrolling the freeway.

I-5 passed through the center of the city as the freeway wound its way north into Canada, a wide ribbon of asphalt and concrete hemmed in by high-rise office buildings, luxury hotels, and apartment buildings too rich for Twig's blood. This part of the freeway had always been heavily patrolled. Twig doubted that had changed in the years she'd been gone, so she throttled back on the engine to bring their speed closer to the surrounding traffic.

The motorcycle fought her, so Twig whispered soothing words to it until it accepted her decision. She hoped it was the right one.

Under other circumstances, just seeing the city itself might have taken her breath away. Tonight the sky was clear. No fog had rolled in off the water to obscure the view, and the tall buildings in the city center gleamed like jewels against the starry sky. She could make out the spires of the Justice Center, gleaming white and silver like a monument to law and order for all, human and magic folk alike. Spotlights had turned the modern glass and steel Trexler Towers blue and green, the colors for a local sports team.

Twig wasn't surprised that the city was still celebrating the team's world championship, even though that particular sport wasn't truly played on a global scale. Everyone, magic folk and humans alike, needed something outside themselves to believe in.

Twig tensed. As sensitive as her ears were to the currents of magic in the world around her, the motorcycle's senses far exceeded hers. If the motorcycle felt the presence of the gang's enforcer, that meant he was near.

Behind. Less than a mile.

The motorcycle hesitated. Twig could imagine her friend calculating speed and distance, and the effect of mass and magic on both.

Her heart sank. So close. They were so damn close.

The damp air carried a trace of the tantalizing scent of tall pines and loamy earth even over prevailing mustiness of the bay. She could almost feel the warm embrace of her grandmother's arms, the strong magic of her grandfather and his father and the wizard they protected.

It had been years since Twig had been to the enclave on Marlette Island, but it was still her home. They were still her people. Even someone like Gillfoil wouldn't dare set foot on sacred elven soil.

The freeway had widened to five lanes. The two on the left led through the heart of the city; the three on the right branched into a maze of off-ramps and interchanges.

One of those interchanges would take them to another freeway that would eventually lead to the island, but that route would add another hour to the journey. Twig had hoped to take a ferry to the island instead, but the exit for the ferries was still five miles away.

Gillfoil operated outside the law, and things like speed limits and the police were minor annoyances at most. He'd have more than enough time to overtake them no matter what route they tried to take to the island.

Twig had no hope of fighting him on the open road. Gillfoil was ruthless, and she didn't have enough magic to go up against him on her own.

She had no time for second thoughts.

She leaned into a quick turn, cutting across two lanes of traffic, thankful for the quick reflexes of the drivers who braked and swerved to avoid hitting them. She pointed the motorcycle toward an exit on the left they had nearly missed.

She could feel her friend's disappointment as the tone of its magic slid into a more subdued range even as she gunned the engine at the bottom of the exit ramp and they tore down a darkened city street.

"I'm sorry," she whispered to the rumble of the motorcycle's engine echoing off cracked concrete sidewalks and boarded up storefronts. "I don't know where else to go."