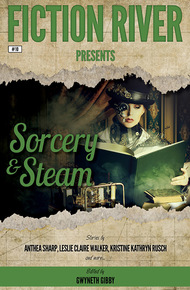 Gwyneth Gibby is the Associate Publisher for WMG Publishing Inc., where she puts her skills as a marketing expert to great use.

She directed feature films for Hollywood legend Roger Corman and taught film and video production for an MFA program sponsored by the Royal Film Commission in Jordan.

She was also an award-winning reporter for newspapers in Corvallis and Lincoln City, Oregon.

Gwyneth is also an expert in narrative in the digital medium.

Steampunk and sorcery offer fantastic flights of imagination in this latest volume of Fiction River Presents. From the merciless march of Lovecraftian prose to the echoes of Russell Hoban's Ridley Walker, these nine authors create convincing and compelling worlds that feel like familiar places from some past life or dream. With engaging characters often caught in agonizing situations, this spellbinding volume proves why Adventures Fantastic says the Fiction River series "is one of the best and most exciting publications in the field today."

Includes:
"Murmuration of a Darkening Sea" by Lee Allred
"Heart" by Leslie Claire Walker
"The Whirring Dreams of Aberrant Blood" by Cindie Geddes
"The Clunkety" by Brenda Carre
"Shapeshifter" by Valerie Brook
"Dead Men Walking" by Annie Reed
"The Airship Adventures of Captain Jane Fury" by Anthea Sharp
"Trouble Aboard the Flying Scotsman" by Alistair Kimble
"The Scottish Play" by Kristine Kathryn Rusch

Steampunk is wonderfully entertaining. With its alternate history, anachronistic steam power, funky technology, and Goth designs, it is a genre that lends itself to both flights of imagination and incisive metaphors.

The authors represented in this volume are masters of language. From the merciless march of Lovecraftian prose in Lee Allred's opening story, to the echoes of Russell Hoban's Ridley Walker in Brenda Carre's "The Clunkety," these writers deftly created such convincing and compelling worlds that I felt as though they were places I had known in some past life or in some dream.

I have to admit that what struck me most about the stories you will find in this volume were two things: first, each story has a cast of remarkably engaging characters, and second, the common theme of entrapment, of being caught in often agonizing situations that the main characters had little or no part in creating. The authors of these stories seem to delight in creating weird and mysterious worlds and then imprisoning their characters in them and watching them squirm trying to escape.

You could think of this volume as a journey through a series of dark escape rooms, peopled by sorcerers, strange creatures and gadgets, from which there may or may not be a way out.