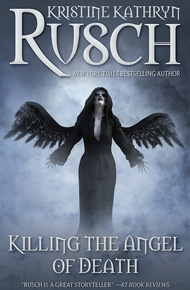 Killing the Angel of Death by Kristine Kathryn Rusch

When Roderigo and Izzy form a group to stop the Angel of Death from taking more innocent lives, they realize they need help. One by one, Roderigo recruits people who see the creatures, who know their evil magic, who suffer from the damage the angels wreak.

When Roderigo enlists the newest recruit—a war-damaged sniper—he achieves the formula for the group's ultimate success. But he might have just doomed the group to the ultimate failure.

A gut-wrenching story about love, loss, and the powerful inevitability of grief.

"I got another one." Rodrigo Jimenez sauntered through the uneven door into the tiny office.

Most people had to duck when they stepped inside. Rodrigo did not, and that always surprised Isadora. He looked like a much larger man—perfectly proportioned, almost square, with more muscles than she had ever seen on a human being before.

He stood just inside the canted doorway, his thumbs hooked on his back pockets and scanned the room as if seeing it for the first time.

She wished he wouldn't do that, because then she would see the room clearly too. Wax-coated paper coffee cups from the giant 1980s hot beverage machine in the shared hallway toppled out of the plastic garbage container near the door. The recycling bin was mostly empty, just a few circulars and advertising flyers that Rodrigo would toss in there whenever he came into the office first.

The pilled beige industrial carpet needed vacuuming (needed replacing, really), and an inch of dust covered the windowsill in front of the half-open window.

The dust wasn't Izzy's fault. The office was in a strip mall on a very busy road, and if the window was open, the entire place filled with road grit within fifteen minutes.

Still, the place was a sty. He knew it, and she knew it. He wanted it to be shipshape at all times; she didn't care. She figured the person who cared the most should be the person to do the work; he figured everyone should be cleanly.

That was only one of their many differences.

"We have enough people," she said, not moving from behind the faux wood oversized desk they had found at a warehouse that specialized in cleaning out old offices. At least she had a modern chair—her back didn't accommodate the green-and-steel concoction from the 1960s that Rodrigo had picked up at the same warehouse.

"We don't and you know it." Rodrigo flopped on the ratty brown couch—her furniture contribution—and folded his hands behind his head. "We need a sniper."

"I don't like guns," Izzy said for the five-thousandth time.

"Then leave the damn project," Rodrigo responded, as he had each time. It had become a ritual. They had to get through the I don't like guns routine before they could have a real discussion.

"I'm not accurate at long distances." He tilted his head slightly. "That's a special skill."

"You're stalling," he said. "You just don't want to go the Meeting."

She rolled her eyes. "God, the fucking Meeting." She hated the Meeting. Everyone there had eyeballed her weird the day she had given her "testimony," and the "facilitator" had had the balls to tell her that maybe she needed to find a meeting outside the city, in a place where people would understand her grief.

She had never even gotten to her grief. She had started wrong, started with the trigger—Bongo's death. She'd told them how losing her only friend had started a downward spiral, how she had actually stood in front of her medicine cabinet and stared at the contents inside, how the fact that he hadn't wound his furry feline way around her legs in that moment of crisis made the moment of crisis even worse.

She'd come back, though, because Rodrigo—whom she hadn't known at the time—had touched her arm.

And then he'd left. And because of that moment of compassion, she'd returned one more time, and had to endure some scrawny kid shaking his head and whispering loudly to the dumpy middle-aged man beside him, "Oh, God. The cat lady returns."

Rodrigo had saved her. He had shut the kid down with one steely look, then brought Izzy a coffee from the burned mess in the scratched gray urn at the back of the room.

She clutched the cup he'd brought her and listened to tales of grief clearly more harrowing than hers. The dumpy guy, watching his wife die by inches after she was burned in a fire; the scrawny kid, losing his best friend in a freak accident at a water theme park.

Most people didn't speak, though. They listened, picked at their clothing, watched the clock on the wall, and drank too much terrible coffee. The "facilitator," a thin nervous woman who seemed to prefer faded print dresses three sizes too big, mouthed the platitudes Izzy had expected: Grief is a process. We all experience it differently. It's different with every death. Ride the waves and understand that this, too, will pass.

If Izzy wanted platitudes, she would have gone to church. She had figured that something that billed itself as a Grief Support Group, held in a half-forgotten side room of City Memorial Hospital, would actually be run by someone with credentials, someone who understood grieving, someone who actually cared.

It seemed like the only person who had cared had been Rodrigo, and except for talking to her that first day, and bringing her the coffee on the second, he hadn't said a word. He just sat near the back wall, wooden chair tilted back, massive arms crossed, and watched the proceeding as if he were the body guard, not someone whose life had been upended by death.

She later discovered that upended wasn't even the right term. The last ten years of Rodrigo's life had been all about death, and he was trying to find a way to deal with it.

Or he had, before the shooting.

"It's not even the same Meeting," he said, as if to placate her.

"It's always the same Meeting," she said and made a face.