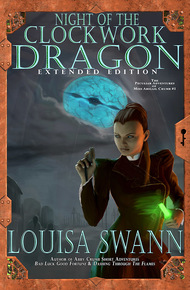 Night of the Clockwork Dragon by Louisa Swann

Would YOU say no to your mother? What if that same mother just happened to be the world's most powerful sorceress and a necromancer to boot?

Surviving Mother Rule #1: Never say no to a sorceress.

After six months of murderous seas and women-hungry men, Seventeen-year-old Abigail Crumb finds herself mired in people-eating San Francisco mud with nowhere to go. Until earthquakes, flying mini-demons, and a mechanized beast straight from the pages of Myrcoff's Clockwork Beasts of Myth and Legend strike fear in the locals' hearts—and everything changes. Join Abby and her ensemble of quirky friends in this action/adventure fantasy with a dash of steampunk thrown in—set in the historic wild, wild west!

My throat tightened until I could scarcely breathe. This oily fog was different from the absolute dark I had experienced earlier. I had encountered this particular type of fog once before—during the first night of the cholera outbreak that had enveloped our tiny village of Hill's End almost seven years previous. The night my mother sent me sniffing after a corpse.

There had been magic afoot that night, dark magic.

I had been all of ten years old and had just decided to "practice" rebellion. Mother wanted me to practice my magic—by finding her a corpse. I wanted nothing more than a mug of hot milk and honey.

So I had ventured forth into the night.

In search of a freshly dead corpse.

With one of Mother's caveats thrown in at the last moment: I could not use my eyes.

At the time, I had thought to throw water on the fire of her schemes by only using my oh-so-ordinary nose. But not only did I detest stumbling blindly about in the streets, I could feel dark magic lingering nearby, sense its intent. I kept telling myself it was my imagination as I sensed my way through the streets, working my way deeper into the poorer section of the village where bodies had been left to rot in doorways and alleys.

The kind of territory my mother preferred for its recruitment possibilities.

The deeper into the mews I roamed, the more heightened my senses became. I heard rats squeaking and roaches chittering. Smelled the stink of feces and old blood.

And I felt his return—not to life, to something other than life.

He had been dead for precisely fifteen minutes—according to the Emanuel Brothers pocket watch given me in secret by a sympathetic neighbor who had realized I was always late for supper—when he suddenly stumbled to his feet and ambled off through the fog. I had been furious, certain that Mother had followed me when she was supposed to be waiting where I'd left her.

But it hadn't been my mother prowling the streets that night.

The chill fog swirled again, touching my cheek, curling my hair, reminding me I was in San Francisco, not London. Spidery shivers rippled across my skin.

Had that something followed me across the Atlantic Ocean and around the Horn?

The feeling—whatever it had been—passed, leaving me trembling and feeling like an idiotic fool.

I let out the breath I hadn't realized I was holding, dug the light stick from my reticule, and gave the stick enough taps to illuminate the fog around me.

No Once Dead bodies stumbling about like blind puppies. No Evil Incarnate.

And the fog appeared to be thinning, not thickening.

In fact, I could feel a light breeze picking up.

I couldn't tell what time it was. Mother had absconded with my pocket watch as soon as she discovered it had been a gift. It hadn't really mattered after I had been sent to finishing school—we always had access to clocks. Which is why I had never taken the time—pun intended—to replace the watch. (Another one of Miss Beauregard's favorite pastimes had been inventing puns, though I've always wondered—does one invent puns or create them?)

To my immense relief, the wooden platform in front of the Niantic was more than a mere platform. The light stick—and the shifting fog—revealed an entire walkway made of wooden planks. I couldn't bring myself to return the light stick to my reticule despite the thinning fog and a light emerging some distance ahead. Instead, I held the device down by my side, partially hidden by my skirts, somewhat heartened by the ability to see. The firm surface thudding beneath my boots also helped to bolster my confidence.

With only minor trepidation, I made my way further up the street, moving rapidly toward the patch of glowing light.

Directly into the path of a man-sized blob that materialized out of the darkness, standing directly in my path less than a stone's throw ahead.

No comment from the valise which had been surprisingly silent since that debacle in the Niantic.

I slid the light stick back into my reticule as unobtrusively as possible, chewed my bottom lip, and considered my options.

Returning to the Niantic was not one of those options.

Neither was using the infernal derringer that had already failed so miserably.

I gently released the latches on my valise, preparing to reach inside for my knitting needles, then hesitated as two other blobs—roughly the same shape, but varying in size—leapt upon the first, carrying him or her to the ground.

I squinted, trying to make heads or tails out of the goings-on.

The best sight is always hindsight as Miss Beauregard was fond of saying. In hindsight I would have been better served to stay aware of my entire surroundings. As I struggled to see through the fog, someone dropped a potato bag over my head, turning my bleary world stinky black.