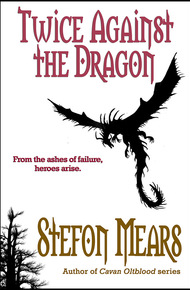 Twice Against the Dragon by Stefon Mears

Ten years, mocked and reviled as Larek the Burned, surviving as a near hermit.

Twice Against the Dragon, an epic fantasy tale of heroes, failure and redemption. From Stefon Mears, author of the Cavan Oltblood series.

The great wyrm rose up on its back legs, wings spread wider than the cattle pen beside it. Its scales glistened black even under the threatening rain clouds, without so much as a seam Larek could see. Nothing for Taran to sink an arrow into. Foreclaws so long and sharp. Made Inga's sword look like a dagger.

The dragon reeked of sulfur, ash and death. Larek's breakfast of cold, rushed mutton stew threatened to taste even worse if it came back up.

Dragons only strike where you're weak.

A single line, from a single history text in the vast library of Larek's master, but it stood out in the chaos of the young wizard's mind. Death looming above him. Spells chasing their way around his brain. But Larek did not dream of glory or wet himself with fear.

Instead that single line dominated his thoughts.

Perhaps because the dragon's presence here confirmed it.

Three weeks ago the dragon first struck. Rumor had named it Blackflame, the dragon whose fire burned as dark as its scales.

One week ago, royal scouts reported that they had successfully traced the wyrm to its lair, in a cavern to the east.

Two days ago the king had gathered a company of thirty knights, plus the royal wizard and two ducal wizards.

Yesterday that company set out to slay this Blackflame once and for all.

And yet here, this morning, among dozens of farms better known for their grains and peas than for their cattle — well west of the capitol, much less the dragon's reputed lair — the beast came to feed.

No knights here. Not even a militia. Only three willing to take up arms. Taran, the tall, handsome archer who made his living by shooting through the eyes of his prey, then selling their hides and furs as well as their meat. Inga, the strong and stocky farmer who gained a reputation as a swordswoman when she slew a pack of six bandits.

And Larek, red of hair and red of eye, a wizard in his first official robe, pale blue with gold trim. Too young to grow a beard and thin enough to hide behind his staff.

Larek only meant to pass through on his way to seek a court position. If he could find a court small enough to match his inexperience. But at dawn the dragon had been sighted, and Larek's ablutions had been interrupted by Inga, kicking open his door at the inn.

Taran, smiling, stood behind her, leaning on his longbow. Inga insisted that the three of them could slay the beast.

That was the stuff of songs. And Inga had such charisma and enthusiasm that Larek had been proud to set out beside her. Taran even sounded confident of their victory.

Together they rode wide circles through the wheat fields, following the route the dragon flew above them.

But now the beast had landed, here beside a pen of a dozen cattle.

Inga screamed a charge, great sword held high in both hands, knees guiding the roan that had served her better against bandits than it ever had with a plow.

Taran pulled up short and loosed an arrow. Not for any of the seams Larek had sought, but for the eye of the beast.

Larek halted his borrowed piebald gelding and raised his staff, desperately incanting a spell that might protect them from dragonfire.

Should protect them from dragonfire.

Larek knew the spell. Had practiced it often, in secret. He had to practice such spells in secret because his master would have disapproved. "A wizard provides support. Guidance. Counsel a king, don't slay his enemies. Enchant a sword, don't strike the blow. Heroes die young, but a smart wizard can live forever."

Yet those were not the words Larek heard over and over in his head as he chanted his spell. His thoughts fixated on that single line from that one old history. Dragons only strike where you're weak.

In particular, it was the last two words that resounded through his mind. Over and over.

And the dragon set them all aflame.