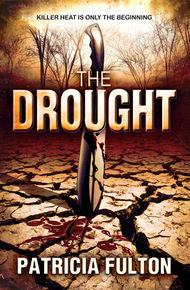 Patricia Fulton lives with her husband and two kids in Roswell, Georgia. She lived in Texas during the 1998 drought and witnessed Lake Arlington evaporate. The heat left a lasting impression. She holds a Master’s Degree in Professional Writing from Kennesaw State University. Her creative nonfiction has won three awards and her story, 612 West Maitland was selected for publication in O’ Georgia! A Collection of Georgia’s Newest and Most Promising Writers. The DROUGHT is her first novel and has been selected by the Kindle Book Review as a top 5 finalist for best Indie Horror novel 2012.

The Drought by Patricia Fulton

Odd things have been happening around town. Hugh McManus went out to one of his grazing pastures and shot the better part of a fine herd before shooting himself. Luke Casteel crawled into a drainage pipe and never came back. A herd of wild javelina attacked and killed Rod Sawyer. And the thing is, the dying isn't nearly done.

Jared Riley knows there's something sinister about the heat. It's got people acting crazy and it's got him hearing things. A voice keeps whispering, "It's gonna get mighty hot. Yes sir we like our meatloaf and taters well done, served up pipin' hot." Convinced the heat is tracking them, picking them off one by one, he sets off to find help. Trouble is, the people who have the answers are more dangerous than the heat.

Driven by strong characters and a twisting plot, The DROUGHT delves into the supernatural world where ghosts roam the landscape and a voodoo curse floats on the wind.

The Drought Excerpt – from Chapter 4

Barry Tanner fell asleep with the picture of his mother clasped in his hands. He thought if there was anything worse than a beating it was waiting for it to happen.

He was sleeping when the moment finally came.

The first lash of the belt cut through the darkness and across his bare chest, wrenching him into consciousness. Crying out, he instinctively rolled over and into a fetal position, allowing his back to take the next lash. His father didn’t speak. There was no lecture to accompany the blows, just the sound of the belt whistling through the darkness until it made contact with a stinging smack.

Cringing beneath each lash of the belt, he gripped the mattress with rigid fingers and bit into his pillow to keep from crying out. There was nothing he could do about the tears rolling down his cheeks, but he refused to give his father the satisfaction of any sound that signaled weakness. Instead, he concentrated on the rhythm of the beating. Eight, whistle, smack, don’t scream. Nine, whistle, smack, don’t scream. He counted each lash, mentally recording them, storing them in a vault of hatred he’d created in honor of his father. Ten. The whistling stopped. He drew in a ragged breath and his father spoke for the first time.

“I have a little something extra for you this time, Barry.”

Barry closed his eyes, tensing his body as he waited for the next blow. This time, the breath fled his body in a gasp. The metal belt buckle ripped into his raw back. The buckle descended again and again, until he lost count of the blows.

He floated just below consciousness, noting with bemusement the rhythm of the beating had changed. Under the added weight of the buckle, the whistle had become more of a warble. With each thud of the buckle, the smack had more of a wet sound. The rhythm now went something like, warble, squish, just breathe. Reality, coated in pain, slipped away and he chuckled. Hey what starts with a warble, ends with a squish and is covered completely in red?

The single word, whispered from the walls, emanating from the dull gray twilight of unconsciousness, where he nearly slept.

His eyelids fluttered and slowly opened. Tiny red spots speckled the white cotton sheets. He rubbed at one with his finger. Feeling his lids grow heavy, he started to drift away again.

His eyes rolled open, searching the depths of the shadows for the voice. The room was cold. He could see his own breath coming in short, tight, expulsions. These exhalations filled the room with a light mist and through this celestial fog he saw her for the first time.

She waved her hand, motioning for him to come to her. Her movements were languid, and somehow as melodious as her voice. Her dark hair fell past her shoulders. He stopped there, unwilling to allow his eyes to drop beyond those soft shoulders. Barry, bring me the brush, the silver one on the bureau. She beckoned again. Everything in him ached to join her but he was afraid to move. The belt had a way of snaking around the body and finding places that were harder to heal than the back.

Understanding poured from her eyes. She looked past him. He followed her gaze. His father was standing over the bed breathing raggedly, the belt hanging from his hand. Puzzled, he looked down at the bed where his own body lay, a bloodied mess. His arm was outstretched, reaching toward the corner of the room where she waited. He stood, frozen, between the carnage on the bed and the vapory presence of a woman who by all earthly rights could not be there. His eyes passed over the bloodied back of his body and followed the outstretched arm until they made contact with her eyes. Familiar eyes. She opened her arms and whispered, “Come to me, Barry.”

Unwillingly, his eyes dropped away from hers, falling past her soft shoulders and tangled hair. Traveling downward, his eyes followed the gauzy lines of her nightgown until the white material turned crimson. His lips trembled with an old pain, an old memory.

With a ragged sob, he walked into his mother’s embrace.