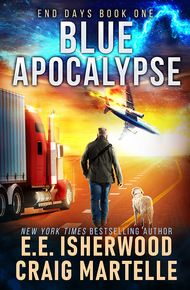 I see my other lives, a career in the Marines, those damn hand-written tests in law school, a business consultant, as if they're stories from a book. I see my books as if I lived there, as if I were friends with the characters. All things we remember are behind us, only those we imagine lie before. I'm not sure which place I prefer, but I don't have to choose. They live together in my mind. My books have some award nominations, they have bestseller tags across multiple countries. I write about justice, honor, and loyalty because that's what I care about. My stories are mostly set within worlds that haven't been but could be. We have to be ready.

Visit my web page, craigmartelle.com for the latest posts and updates or find me on Facebook, Author Craig Martelle. Send an email to craig@craigmartelle.com to join my mailing list for the latest on new releases, information on old releases, and anything related to my books, or simply follow me on Amazon - they'll notify you of my new releases as will BookBub.com if you follow me there:)

No one knows what is happening, but everyone is trying to find out. Buck is running his big rig from the west coast. Garth is trapped in New York City with his high school friend. With Marine training and an eighteen-wheeler, Buck heads east. With no training and no communication with his father, Garth fights just to escape New York City.

The Hadron collider in CERN. Its twin south of Denver. The Australian outback. What do these places have in common? Those who might be able to fix things are trying to figure it out while Buck doesn't care. He is on a mission to find his son. Is time the enemy of humanity?

It's fun to read science fiction with that thriller sensibility that grabs you and won't let you go until you've finished. Craig Martelle brings his trademark action, characters and humor, with a cool mystery as a backdrop. – Alec Hutson

The big Peterbilt's engine brake brought the rolling monster to a full halt. Buck was conditioned to hate traffic on the interstate, but this one time, he was okay with it. As soon as the wheels stopped, he jumped out of his chair and opened Big Mac's cage.

"Come on out of there, Mac," he said in a soothing voice.

The six-month-old Golden Retriever sprang out of the small kennel like a fifty-pound bullet. He hopped off the sleeper bed and jumped onto the passenger seat in one fluid motion.

"You can't get out, yet, so don't get any ideas about doing your business, okay?"

The pup's tongue lolled out the side of his mouth as he panted with innocence, but Buck figured that was his usual ruse. Taking a leak was always on the little guy's mind.

Buck got back into the driver's position, buckled up, then glanced over to Mac.

"Don't you do it. We're stopped, but there isn't enough time to get out." He pointed ahead, even though the dog couldn't see over the dashboard. "See? The cars are moving up there. We're next."

Mac sat upright, paying canine attention, and even tried to look where Buck pointed, but then he held out a paw to signal he wanted something.

"I know. Here you go." Buck had traveled with the dog for the past week, so they'd gotten to know each other pretty well. He reached out and gave Mac a good scratch behind an ear.

Mac voiced a low grumble, which meant he was loving it.

"All good? I have to put my hands on the wheel, now. Sorry."

He half-expected the excitable dog to get down off his seat and put his head on Buck's leg, but his words seemed to calm him. Mac walked around his perch for a moment then plopped down and curled up into a ball.

"I wish I could lay there and sleep. This traffic is for the—"

The roar of their engines shook his ribcage because the aircraft weren't flying much higher than his roof. They came up from behind and zoomed along the highway mere feet above the stopped traffic. He marveled at the military precision as the two jets shot off toward the horizon in front of him.

"Sheesh. What the hell is going on today, eh, Mac?"

The planes stayed low to the deck as far as he could see, but he lost them when they reached a bank of low clouds several miles ahead.

"What now?" he asked his little partner. Buck wondered if the noise had scared him.

It had. The evidence was already soaking into the seat cushion.

"Well, at least I don't have to take you outside, now."

Traffic was about to move once more, so there was no time to clean up. He did his best to grab one of the beach towels he kept for puppy emergencies but soon got busy driving.

"There's nothing to worry about, buddy. I promise."

In the distance, angry lightning danced among the dark clouds.

Nothing to worry about, he told himself.