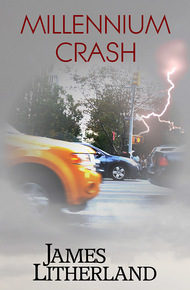 James Litherland is a graduate of the University of South Florida who currently resides as a Virtual Hermit in the wilds of West Tennessee. He's lived various places and done a number of jobs – he's been an office worker and done hard manual labor, worked (briefly) in the retail and service sectors, and he's been an instructor. But through all that, he's always been a writer. He is a Christian who tries to walk the walk (and not talk much.)

Everything goes wrong when the first research expedition from the future lands in the summer of 2000 in New York City. The master time-travel device is destroyed, the professor in charge is killed, and the rest of the travelers are scattered across that ancient metropolis. They're stranded in the past, their project in a shambles from the start, and their troubles are only beginning…

This story reached out and grabbed me in the first chapter. Not because of the whiz-bang timey-whimey stuff, but because it all failed - leaving the intrepid team to find a way home to their proper time. Time travel doesn't come with trip insurance. Perhaps it should. – Nathan Lowell

ANYA kept her eyes open as reality rapidly reassembled around her—a concrete curb beneath her feet, the back and front ends of two taxicabs parked on the asphalt ahead of her—and about thirty meters in front of her stood the tall, slim, white-haired form of Professor John. He had been standing right beside her the previous moment.

In the few seconds it took to begin processing the new surroundings that were taking shape, Anya felt a vague sense of panic racing up her spine, an anxiety she didn't understand. Her instinct forced her to shout.

Anya watched as he turned toward her, confusion and disorientation plain on his face. While her brain still grasped at the nature of the jeopardy, the sound of tires screeching intruded upon everything, and a large black vehicle slammed into view—and into the professor. Reality crashed upon Anya with a vengeance.

Suddenly her feet were free, and she dashed between the cabs and into the street, head swiveling in every direction as horns honked all around her. She saw John lying awkward across the back windshield of another cab down the road. The SUV had braked hard as it hit him, propelling the professor into the rear of the taxi, which had also screeched to a halt.

Anya darted through the newly created parking lot to help John. Shouted swear words swelled into the continuing cacophony of car horns blasting, the overwhelming noise pressing upon her still struggling senses. The transition from the sterile, quiet conference room of a moment ago to this raging sea of stimulation was a bad jolt. The fall from a feeling of excitement for their journey to this horror deeply jarred her.

But she was adapting quick to the new environment. Even before she reached the sprawled figure of the professor, she'd begun to suspect it was hopeless. Up close, neither the blood nor the jagged bone poking out of his thigh disturbed her. She'd seen so much worse when she'd been a nurse. What made Anya's stomach turn over with incipient nausea was trying to digest the fact of John's death, the sudden and violent loss of her beloved mentor.

She wanted to freeze, to simply shut down. The whole project stood in shambles before it had even started. Her old training took over though, and the urgency of the situation prodded her into action.

She checked his watch. It'd been broken, likely shattered beyond any hope of repair like the professor himself. She fought back the tears. She didn't have time to worry about the destroyed device but slid the watch off his wrist and into her pocket without hesitation. She couldn't just leave it.

Anya didn't want to leave the professor either, but she had no choice. She looked up and around then and realized a large crowd had gathered, staring at her. They probably thought she was robbing John's body. Several shouted, others pointed, and some made gestures presumably rude—but no one tried to impede her flight as she ran from the street, diving heedlessly into that crowd. Something else had already attracted their attention away from her.

At first she couldn't fathom the lack of familiar faces—she had scanned the sea of those around her and kept looking as she passed through the people standing there. But she'd recognized no one. She'd not only lost the professor, she'd lost them all.

Turner and Nye, at least, had been standing less than a meter away when they'd all Traveled. Anya stumbled along the sidewalk, searching. Where are they now?

Anya herself had been standing right at John's shoulder—almost touching—and he'd materialized quite a distance from her. A fatal separation. The others must have been similarly scattered, and Anya needed to focus on finding them. They could be in all kinds of trouble themselves.

Her mind was spinning as she walked on, trying to think. She couldn't deal with all the implications of the professor's death and the destruction of his watch—not now. The critical thing was to regroup. Then they could deal with the rest. Together.

She continued to move away from the point of arrival, the scene of the accident. She had assumed the contemporary authorities would be en route—she could not afford to deal with them, not without identification. She'd have to rely on Turner and Nye having the sense to search for her.

Anya almost stopped dead in her tracks. She'd believed she had kept her wits about her, but clearly they were still scrambled. Worried that she hadn't put enough distance between herself and the scene, she waited until she'd rounded a corner and walked down another half block before she ducked into a dim recess to check her watch.

She took several deep breaths to calm herself. Only then did she lift her head and notice the actual city around her, great towering structures crammed onto this small island and thrusting so far up into the sky as to drape almost everything in shadows. What a sight. To think that humanity had once built such magnificent enclaves. No wonder.