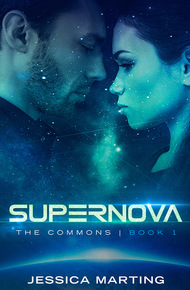 Jessica Marting is the author of over a dozen sci-fi and paranormal romances, an avid reader, art enthusiast (but not quite an artist, despite all that time in art school), and makeup collector. She loves old movies and TV shows, coffee, crocheting, and the thrill of finding treasures at thrift stores. Jessica lives in Toronto with her husband and their very spoiled cat.

All Lily wants is a fresh start, and a desk job in a cryonics lab in Toronto seems like the perfect way to begin her new life. She just doesn't expect her new employers to be a pair of power-hungry alien psychopaths from the far future performing ghastly experiments on humans and desperate to do anything to keep their activities under wraps, including kidnapping her.

Hauling a pile of museum artifacts in a dilapidated patrol ship, the worst things Captain Rian Marska expects to deal with are bickering crew members and a long, lonely trip across the galaxy. An 800-year-old Earth exhibit coming to life and claiming to be taken from the 21st century is the last thing he expects, along with the feelings she stirs up in him.

When Rian's superiors sweep Lily under the rug, they take it upon themselves to find out why she was taken from her own time and what her kidnappers want. What they discover has implications not only for them, but for the entire civilized universe.

A very engaging read by Jessica Marting. When Lily takes a job in a cryonics lab, the last thing she expects is to cross the wrong people and end up on a spaceship in the distant future. Captain Rian Marska never expected a museum exhibit to wake up. Now they both have a mystery to figure out and one another to deal with. – Terry Mixon

Lily Stewart stared at the last zombie, shambling towards her little fortress. It mindlessly chewed on an arm pilfered from an innocent victim, red and black gore dribbling down its face. She looked over her weapons cache, willing a measly hand grenade to materialize. It didn't.

The zombie lost its grip on the arm and tossed it aside jerkily. It sped up.

She let out a low curse. The zombie lurched forward with a guttural moan and stepped into her fortress. GAME OVER flashed across Lily's computer screen. THE ZOMBIES ATE YOUR BRAAAINS!!!

Lily sighed and closed the game, then brought up a spreadsheet detailing Lazarus Cryonics' appointments. There weren't a lot, at least as far as this receptionist could tell. Lazarus didn't seem to do too much business; there wasn't a big market for it in southern Ontario.

But then, what did she know? The reason Lily had taken the job in the first place was its welcome respite from the thick August heat, air-conditioning being a luxury her stingy landlord refused to install. The total lack of monitoring on her computer activities was an added bonus, although after this latest defeat she almost wished one of her employers would intervene and cut her off.

Her employers. Ugh. She shuddered faintly in revulsion and was grateful they rarely ventured into reception.

The locked door off the foyer opened, as though one of them on the other side had heard her thoughts and felt like creeping her out. Dr. Zadbac was one of the two doctors who owned Lazarus Cryonics. He padded into reception, his footsteps muffled by the plush carpeting beneath him. "Minsa Stewart," he said by way of greeting. Never a hello from this one. His accent was unrecognizable to Lily, as were the foreign words that peppered his speech. Lily had stopped trying to get him and the lab's other doctor, Pitro, to call her by her first name or at least Miss Stewart by her second day.

"Hi, Doctor," Lily returned. She glanced at the time display on her computer—one-fifteen. "Going out to lunch?"

"No, I do not require nutrition at this time, nor do I care for the offerings around here," he replied. "I believe we have an appointment at fourteen hundred hours. Who is it today?"

Lily checked the spreadsheet. "Andrew Claybourne," she read. "He's here for a consultation. He's only interested in having his head in the deep freeze."

Dr. Zadbac's mouth thinned slightly. "Such a crude term," he said. Then, "I'm hoping to change his mind. Who wants to be reanimated without a body?" He smiled wanly.

Dr. Pitro had the same one. The pair had a brotherly resemblance, each unusually tall and rail-thin, their bald heads almost too large for their bodies and bulgy eyes too large for their heads. Zadbac's were nearly black, the irises almost indistinguishable, and Pitro's an unnatural shade of green. Lily suspected he wore contacts.

If Lily were stupid, she might ponder the notion that her employers were vampires. Of course, vampires would burst into flames at this time of day if they existed, and she would have a bigger mess on her hands than an apartment that smelled like feet in the humidity.