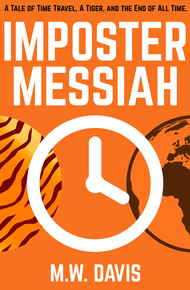 Some say that M.W. Davis is a sentient grizzly who lives deep in the Ozarks with his wife (the chipmunk), daughter (a red panda), a son (who wants no part of this spirit animal nonsense), a cat (an actual cat), and a wise old corgi named Fred.

When not writing complete nonsense, M.W. earns a living in the health care industry. He likes to view himself as a jack of all trades, a tinkerer of old, a renaissance man. More than likely he has an undiagnosed case of ADD. His hobbies include collecting hobbies. From woodworking, to board games, to cooking, to computer gaming, 3D printing, vinyl collecting, and restoring arcade cabinets, he is on a lifelong mission to try all of the hobbies at least once.

When a time agent lets his historically significant student get killed, Josh is the only agent that can take his place. This event is causing the universe to play fast and loose with physics, allowing the sins of the ONLE time agency to haunt them from the past. Will ONLE survive this attack? Can Josh figure out how resurrection works and get the girl? Will Raj find a curry that doesn't leave him running for the toilet? Join the adventures of Josh and the rest of the ONLE time agency to find out.

M. W. Davis provides a great change of pace to this collection with a very funny satire of the sorts of disasters that can arise through time travel. A send-up of religion that should leave even the godly-inclined smiling. – Alec Hutson

"What the fuck do you mean Hitler wasn't that bad?"

"No, wait." Josh replied without hesitation, "I said when looking at the alternatives there could have been worse."

"Listen, son, I was with the forty-fifth when we liberated Dachau. I don't think things could've been much worse."

"All I was saying was that if Himmler had been in charge instead of Hitler, he would have known better than to invade Russia in the winter. Himmler wouldn't have committed suicide, and that means the war would have gone on until 1952 and cost three times the lives it did." Josh laid out his case like he had done on a hundred similar occasions before. He never understood why people always argued these points with him.

Josh took another deep pull of his beer and continued. "All I am saying is that by making sure Hitler led the Nazis, well, it struck a balance between having Europe overpopulating and a massive famine in 1998 and a war that may have set civilization back six hundred years."

The retired Army Colonel looked at this idiot in front of him and shook his head. The Colonel wondered to himself why the hell was he sitting here in this hotel bar listening to the ramblings of a drunk man? Why had he allowed that old bootlegger to talk him into campaigning for his son? That's right, he had promised him wealth and a cabinet position if the kid won. An Army pension was fine, but it wasn't anything compared to what ol' Joe was offering him.

Josh saw it in the Colonel's face, he was losing him. "Come on. Let me buy you another beer and change the subject."

"That is the first thing you have said this evening that made a lick of sense. How did we even get started talking about Hitler?"

"I asked you. If you could travel in time, just once, what would you want to do? And you said, 'Kill Hitler.' I then proceeded to explain why you were wrong."