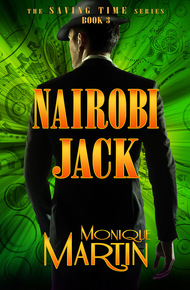 Monique is the bestselling author of the romantic Time Travel series, Out of Time, the adventurous spin-off Saving Time series, and the YA Historical Fantasy series, Blaze.

She graduated from the University of Southern California's Film School and worked in television for several years before becoming a full-time novelist. She lives in Southern California with her naughty Siamese cat, Monkey, and is currently working on a screenplay and more books in the Blaze series and the world of Out of Time.

Jack Wells barely has time to recover from his last assignment when he's sent on a new mission. He's an emergency replacement and there isn't time for the usual prep. All he knows is the name of the man, David Grant, and where he'll find him: 1932, Nairobi, Kenya.

In Colonial Africa, wild animals aren't the most dangerous creatures around. Hedonistic aristocrats and vicious criminals are much bigger threats. The mission is more complicated than Jack could ever have imagined as he struggles to save Grant from an unknown assassin and faces someone from his past he never thought he'd see again.

I've known Monique Martin (online) for years. Her series consistently tops the time travel charts and she's a killer story teller. In this one former OSS officer turned time operative, Jack Wells is sent on another mission for the Council for Temporal Studies. Sent to 1930s Kenya during the fading days of Colonial Africa, Jack finds himself saving a man from his past he never thought he'd see again. It's another rousing adventure from Martin with her trademark humor, charm, and heart-stopping action. – Nathan Lowell

The pilot was unconscious; at least, Jack hoped he was. He sat slumped forward in his seat, one arm dangling lifelessly outside the cockpit. Jack climbed up onto what was left of a wing to get high enough for some leverage.

He squeezed the man's shoulder, but he didn't react. Jack tilted his head back. The leather helmet and goggles obscured what the black soot didn't. The man's head lolled back but not all the way. He was out but not completely out.

The red flames licked higher and danced along the front of the fuselage. The fire from the engine was making its way back toward the cockpit. Fast.

Grant was too woozy to do anything but groan. Jack could feel the heat from the fire behind him. He managed to get ahold of Grant's right arm then half-lifted, half-flipped him out of the plane. They both hit the ground hard.

It wasn't pretty, and if something wasn't already broken, it was probably broken now, but at least they were out of that tinderbox. Jack got to his feet and dragged Grant away from the fiery wreckage just as the second set of wings collapsed and crashed to the ground.

Jack eased Grant up into a sitting position and leaned him against a wheel of the car. "Grant?"

The man coughed and reached up to pull off his goggles, but before Jack got a chance to introduce himself—or even get a good look at who he'd rescued—a gunshot shattered the headlamp next to his head.

"What the—?" Jack said as he turned to see who fired at them. So much for introductions.

Three men on horseback appeared over a small rise. Two more shots rang out. One hit the dirt and spit up dust, and the other pinged the already dead headlight.

Jack and Grant scrambled for cover. Before Jack could fully ask what the hell was going on, Grant pulled a pistol out of his jacket pocket and returned fire.

When in Rome, Jack thought as he reached for his own revolver. They returned fire, forcing the men to veer off their head-on course.

He glanced over at Jack as he put it in gear. "Getting in?"

Jack jumped over the passenger side door and into his seat. The tires spun in the sandy dirt as Grant floored it. He wasn't, however, driving toward safety, he was driving right toward the men. The three riders had gathered together and were, in turn, heading straight toward them.

"What are you doing?" Jack demanded.

Another gunshot came and pierced the front grill.

Grant looked at the gun in Jack's hand. "Are you going to use that thing or what?"

Jack was about to reply when the next shot shattered the windshield. Grant swerved as the bullet just missed his head.

"Hell," Grant muttered. The windshield glass spidered and it was impossible to see ahead. He leaned forward and punched out as much of the glass as he could with his leather gloved fist. "Better."

Grant pointed his pistol through the shattered windshield with one hand and steered the car over the rough ground with the other.

Given what little Jack could see of him under the helmet, Grant looked like a madman. A soot-covered, muddy-faced, blood-streaked madman with raccoon eyes thanks to the flying goggles.

Grant glanced over at Jack again as the riders continued to shoot. "Well?"

Jack shook his head and half-laughed. Whoever David Grant was, he was nuts. And, Jack thought, I like him.