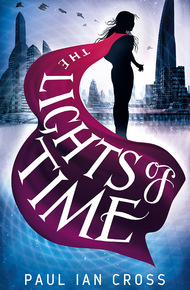 Paul Ian Cross is an award-winning children's author and scientist from London, UK. Paul works in clinical research (developing new medicines) and he's also involved in science communication: presenting science to non-scientists. Paul enjoys his science career but he also has a real passion for writing stories! He enjoys introducing children to the wonders of science, especially reluctant readers. By introducing science creatively, he aims to spark their interest, allowing them to gain confidence with their reading. As a previous reluctant reader himself, he understands how hard it can be. But it's all about making reading fun and interesting!

In his spare time, Paul loves visiting new and exciting places where he's always looking for his next story. One of his favourite places is Scotland, especially the Isle of Skye. His latest adventures include a trip to Japan, as well as two months travelling around the South Pacific; including French Polynesia, New Zealand, Australia and the Cook Islands.

The Lights of Time by Paul Ian Cross

Would you sacrifice your future to save your past?

Engella Rhys is alone, adrift and on the run. Pursued by a secret agency, known only as the Hunters, she must stay ahead to stay alive.

As she travels through space-time using dangerously experimental technology, she only has one wish: to be reunited with her lost parents. After a close shave with a Hunter on the streets of New Shanghai, Engella escapes to find herself on a deserted beach. When she meets a kind stranger, who offers her food and shelter, Engella feels safe and protected for the first time in years.

But who is this woman? And why did their paths cross at the most convenient of times?

Engella soon discovers their lives are intertwined in more ways than she could ever imagine.

Engella is a really engaging character, and I enjoyed going along with her on this enthralling adventure. The universe Paul Ian Cross creates tanatlizes with mystery and kept me turning pages. – Alec Hutson

Engella was tired; too tired to care where she'd sleep. Desperate for rest, she wandered through an alley until she found an alcove large enough to crawl inside. As she huddled against the damp brick wall, she covered herself in a plastic tarpaulin to protect herself from the rain.

Thunder rumbled. The torrent continued. Puddles and pools merged into rivers which criss-crossed the street, and Engella's clothes were soaked through. She pushed a few wet strands of her silver-dyed hair behind her ears and adjusted her hood, trying to limit the water dripping in. She sighed and accepted it was a pointless task. Her makeshift blanket hadn't helped.

A police drone zoomed high above. As it hovered and hummed, it scanned for movement in the streets below. It was probably chasing a thief it had identified, tracking them with its facial recognition software. Sirens whined and blue flashing lights danced across the metal scaffolding for a moment.

A long-haired black and white cat stepped out from behind a large metal container, staring at Engella with piercing eyes that reflected light from the streetlamps. He rubbed along the edge of the container before greeting Engella with a soft purr. Engella reached out and clicked her fingers to summon him. He padded over and allowed her to stroke his head, his purr more pronounced, now a soothing hum. The sound was calming and Engella rested her eyes.

The police drone returned, this time zipping right above their heads, and the cat – startled by the hum of the propellers – darted off into the night.

This was Engella's fourth night living on the streets of New Shanghai City and she hadn't felt this safe for months. She shuffled forwards to get a better view of the towering skyscrapers all around. Vast screens illuminated the cityscape, the buildings completely covered with screens of light. High-definition images flashed, alternating between human faces, commercial products and scenes of serene beauty. Her eyes were drawn higher to the levels of the city's upper dome, a place she dared not travel to. The security of the upper levels used biometric data to access transport, shops and even the street-food stalls, whereas the security on the streets of the lower districts was far less stringent. People from all walks of life could keep themselves to themselves in the low-levs.

The rain slowed, giving Engella some respite. Breathing a sigh of relief, she found a more comfortable position and began to drift off to sleep at last.

A few seconds passed before she realised what was happening. The dizziness took hold more slowly than usual, but the feeling of suffocation quickly engulfed her. Her pulse quickened. She froze, too frightened to move. The streetlamp above her flickered and the bulb cracked, sending tiny shards of glass cascading to the street.

Engella found herself in darkness. A tiny freckle of light appeared. And then another. And then the alleyway was flooded with noise and light. Flashes of orange rushed outward in waves as the space around her began to warp. She grabbed her ears in pain as a piercing hum pounded her eardrums and a sonic boom knocked her against the brick wall.

Shielding her eyes from the emerging light, she watched in horror as a dark figure materialised only metres away.

They've found me, she thought. They're here.

Engella rolled sideways, scraping her hands across the gravel as an energy blast hit the alcove where she'd been lying. She pushed herself off the ground and found herself sprinting, not waiting to see her assailant emerge from the veil of black smoke. She touched her belt, moving her fingers along the leather until they touched the cold metal of her blaster. She opened the clip and managed to draw the weapon, directing three bolts behind her.

She ran ahead, but a shock-grenade landed in her path. She yelped as the device exploded, showering her with brick and dust. After pulling back her sleeve, she waved her hand over her silver wristband to turn the transporter on. With no time to enter any coordinates, Engella had no way of knowing where – or when – she'd end up. She had no choice. She had to get away.

Closing her eyes, Engella hoped for the best. And prepared for the worst.

The device bleeped, and space-time warped around her.

Another shock-grenade exploded, but this time the sonic boom knocked the wind from her lungs. Her senses were overwhelmed. All that remained was the ringing in her ears and a spike of pain in her forehead.

The pain became too much.

Her vision blurred, and she lost consciousness.